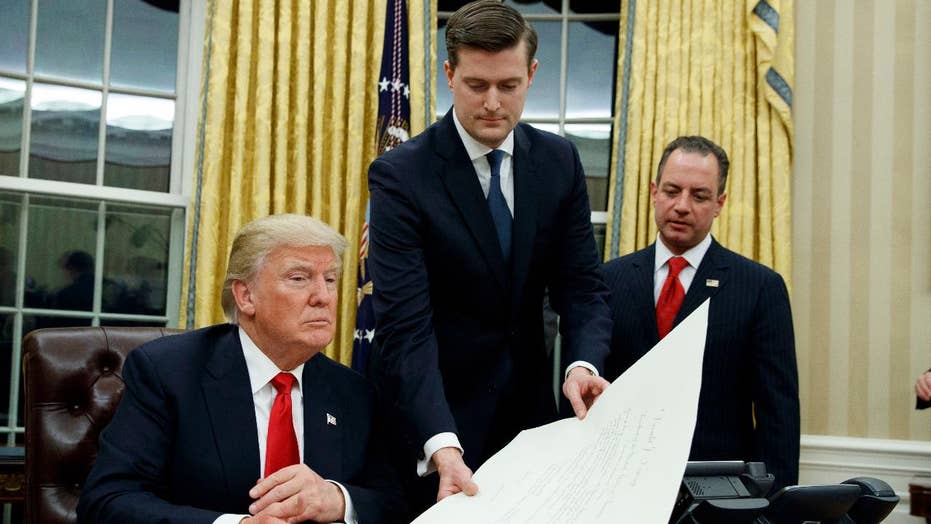 Trump surprised by the Porter allegations, wishes him well

The National Organization of Women is calling on the chief of staff to resign as pressure continues to build over when he knew about the allegations; Kevin Corke has the roundup for 'Special Report.'

President Trump on Sunday blasted the “Fake News Media,” claiming the press doesn’t want to cover positive stories in the U.S., instead harping on negative news.

“So many positive things going on for the U.S.A. and the Fake News Media just doesn’t want to go there,” Trump tweeted. “Same negative stories over and over again! No wonder the People no longer trust the media, whose approval ratings are correctly at their lowest levels in history!”

It’s unclear what exactly prompted the tweet, but it came amid backlash the White House has received on the heels of the resignations of aides Rob Porter and David Sorensen — both of whom have been accused of physically and emotionally abusing their ex-wives.

The Trump White House took heat after the president took to Twitter Saturday to claim that “Peoples lives are being shattered and destroyed by a mere allegation. Some are true and some are false.”

On Sunday, he followed up his “Fake News” post with a congratulatory tweet to Americans who “have already received a large Bonus and/or Pay Increase.”

“4.2 million hard working Americans have already received a large Bonus and/or Pay Increase because of our recently Passed Tax Cut & Jobs Bill....and it will only get better! We are far ahead of schedule,” the president tweeted.

A study published by the Pew Research Center in January found that about 56 percent of Americans believe news is reported accurately, and only 47 percent believe that political issues are covered fairly.