President Trump sends a letter to House Speaker Nancy Pelosi pledging to give his State of the Union address as scheduled, saying there are 'no security concerns' surrounding the event.

House Speaker Nancy Pelosi dug in Wednesday on her call to delay the State of the Union address even after President Trump vowed to proceed with the speech next week, sending a curt letter making clear she will not allow the event to take place during the government shutdown.

Reacting to Pelosi’s letter, Trump told reporters at the White House "we'll do something in the alternative," suggesting a speech of some kind will still happen next week.

Hours earlier, Trump had told Pelosi he was still planning to deliver the address from the House floor. Minority Leader Kevin McCarthy also introduced a resolution to allow the State of the Union to go forward as planned on Jan. 29.

But Pelosi makes the final call, and fired back in a letter to Trump saying she would not consider what's known as a "concurrent resolution," which is needed to allow the use of the chamber for the State of the Union.

READ: TRUMP AND PELOSI LETTERS ON STATE OF THE UNION ADDRESS

“I am writing to inform you that the House of Representatives will not consider a concurrent resolution authorizing the president’s State of the Union address in the House Chamber until government has opened,” Pelosi wrote in the letter to Trump.

Pelosi added in her letter that she looks forward to welcoming Trump to the House “on a mutually agreeable date for this address when government has been opened.”

In recent days though, the White House has been readying a Plan B in case Pelosi moved to block the speech in the House chamber. White House officials told Fox News they essentially were preparing for two tracks for next week's speech. The preferred track is an address, as per custom, at the Capitol. The second track is a backup plan for a speech outside of Washington, D.C.

"The State of the Union speech has been canceled because she doesn’t want to hear the truth. She’s afraid of the truth," Trump said of Pelosi during an event at the White House.

In his earlier letter to Pelosi, Trump denied there are any "security concerns" relating to speech, in response to Pelosi raising that as a potential issue because of the partial shutdown.

“Therefore, I will be honoring your invitation, and fulfilling my Constitutional duty, to deliver important information to the people and Congress of the United States of America regarding the State of our Union,” Trump wrote. “I look forward to seeing you on the evening on January 29th in the Chamber of the House of Representatives. It would be so very sad for our country if the State of the Union were not delivered on time, on schedule, and very importantly, on location!”

Last week, Pelosi had urged Trump to delay his State of the Union address until the partial government shutdown ends, or submit the address in writing.

A senior Homeland Security official later told Fox News, however, that they have been preparing for months for the State of the Union event.

"We are ready," the official said. "Despite the fact members of the Secret Service are not being paid, the protective mission has not changed." 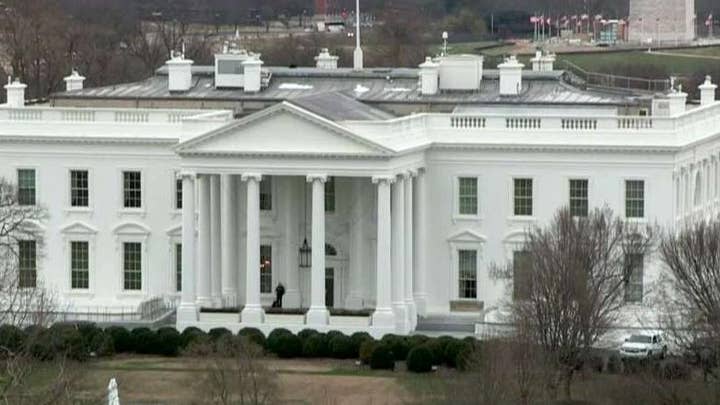 On Tuesday, an official confirmed to Fox News that DHS and the Secret Service are continuing their plans for a State of the Union on Jan 29.

In an appearance on Fox News on Tuesday, White House Deputy Press Secretary Hogan Gidley suggested the president could move the location of the speech should Pelosi block it in the House.

“There are many ways he can deliver the State of the Union address,” Gidley said on "America's Newsroom." “I’m not going to get ahead of anything he would announce.”

Gidley accused Pelosi of “trying to play politics with that venue.” He also dinged the speaker for suggesting it may be difficult to provide security for the event because of the partial government shutdown.

After Pelosi called for a delay in the speech, Trump last week abruptly denied military aircraft to her and other Democrats for a foreign trip just minutes before the congressional delegation was set to depart.

The State of the Union address, historically, has not always been delivered in person. Thomas Jefferson started the practice of submitting the address in writing, and it was not until Woodrow Wilson's administration that the speech was delivered in person again.

The government first ran out of funding on Dec. 22, as the president requested $5.7 billion in funding for border security and construction of a border wall or physical barrier along the U.S.-Mexico border, citing an “invasion” and a “humanitarian crisis.” Democrats refuse to support border wall funding.

“The White House is not showing respect for the American people,” Pelosi said during a Wednesday speech at the U.S. Conference of Mayors winter meeting. “There is a serious concern that this president will shut down the government anytime he doesn’t get what he wants.”