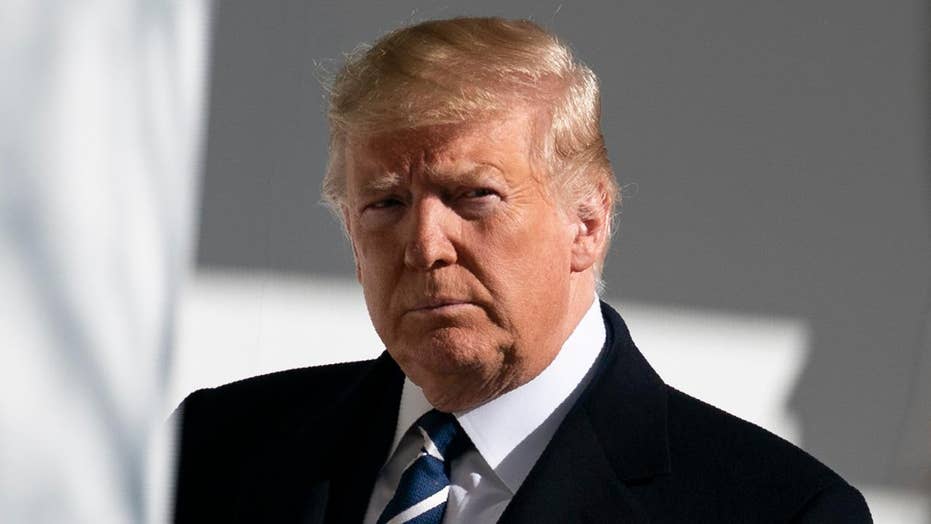 In a pair of white-hot tweets Wednesday morning, President Trump slammed John Bolton over the recent leak of details from his forthcoming book that complicated the president's ongoing impeachment trial -- and needled his former national security adviser over his notoriously hawkish reputation on foreign policy.

"For a guy who couldn’t get approved for the Ambassador to the U.N. years ago, couldn’t get approved for anything since, 'begged' me for a non Senate [sic] approved job, which I gave him despite many saying 'Don’t do it, sir,' takes the job, mistakenly says 'Libyan Model' on T.V., and ... many more mistakes of judgement [sic], gets fired because frankly, if I listened to him, we would be in World War Six by now, and goes out and IMMEDIATELY writes a nasty & untrue book," Trump tweeted. "All Classified National Security. Who would do this?"

Trump's comments come after a New York Times report earlier this week said Bolton wrote in his book that Trump linked aid for Ukraine to his request for Ukrainian President Volodymyr Zelensky to investigate 2020 rival Joe Biden and his family for corruption. Those developments are at the heart of the impeachment trial.

Democrats have said that connection was an abuse of power aimed at boosting Trump's reelection prospects. Trump's defense team has said that there was no such connection, and even if there was, Trump had good reason to think the Bidens should have been investigated for corruption and that such a "quid pro quo" is common in U.S. foreign policy.

A handful of moderate Republican senators, including Sens. Susan Collins, R-Maine, Mitt Romney, R-Utah and Lisa Murkowski, R-Alaska, have expressed interest in hearing from witnesses in the impeachment trial -- and especially Bolton, after the book leak -- to the chagrin of Trump and GOP leadership. Democrats would need four GOP defections to call witnesses.

Bolton has indicated that he would testify before the Senate impeachment trial if subpoenaed, but the Republican leadership is doing its best to prevent that from happening.

Despite the fact Senate Majority Leader Mitch McConnell, R-Ky., privately said early Tuesday that he wasn't sure there were enough Republican votes to block witnesses in the impeachment trial, Tuesday night, a Senate leadership source told Fox News that Republicans were assessing two options to prevent witnesses, in a vote likely to happen near the end of this week.

One plan is to amend any resolution calling for a particular witness to also include a package of witnesses that assuredly wouldn't win enough support in the Senate. For example, if the Democrats seek to call Bolton, Republicans might subpoena Hunter Biden over his lucrative board position in Ukraine, and Rep. Adam Schiff, D-Calif., over his inconsistent statements concerning his panel's contacts with the whistleblower at the center of the impeachment probe.

Another option, the congressional leadership source told Fox News, is for the White House to assert executive privilege to block witnesses, including Bolton. The administration could head to court to obtain an emergency injunction against his testimony, citing national security concerns.