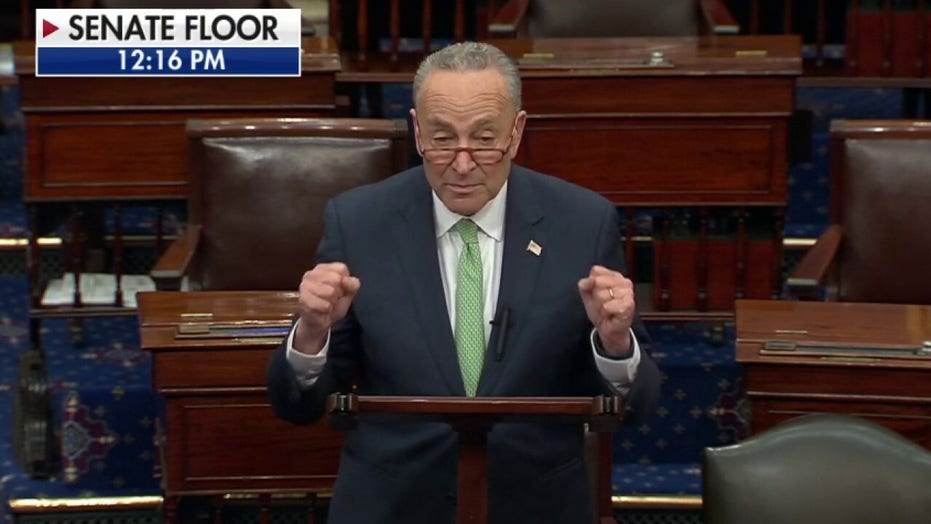 President Trump fired back at Senate Minority Leader Chuck Schumer, D-N.Y., in a scathing letter, responding to criticism of his handling of the coronavirus crisis, telling Schumer: "I never knew how bad of a senator you are."

"Thank you for your Democrat public relations letter and incorrect sound bites, which are wrong in every way," Trump said in the letter released by the White House, referring to Schumer's coronavirus criticism earlier Thursday. "As you are aware, Vice President Pence is in charge of the Task Force. By almost all accounts, he has done a spectacular job."

Trump’s firery response came after Schumer sent a letter to the president on Thursday expressing concerns about shortages of protective equipment, tests, and medical supplies in New York and other hard-hit areas.

“While companies that volunteer to produce ventilators and personal protective equipment are to be commended and are appreciated, America cannot rely on a patchwork of uncoordinated voluntary efforts to combat the awful magnitude of this pandemic,” Schumer said. “It is long past the time for your administration to designate a senior military officer to fix this urgent problem.”

But in his letter, Trump insisted to Schumer that the Defense Production Act (DPA) "has been consistently used" by him and his team but that companies have been honoring the administration's requests "without even a formal notice." He also acknowledged the appointment of Rear Admiral John Polowczyk, who is "in charge of purchasing" and "distributing" of medical supplies, something he alleged Schumer "chose to ignore."

GOV. GRETCHEN WHITMER WEARS 'THAT WOMAN FROM MICHIGAN' T-SHIRT IN SWIPE AT TRUMP

"We have given New York many things, including hospitals, medical centers, medical supplies, record numbers of ventilators, and more. You should have had New York much better prepared than you did, as Dr. Fauci and Dr. Birx said yesterday, New York was very late in its fight against the virus," Trump said. "As you are aware, the Federal Government is merely a back-up for state governments. Unfortunately, your state needed far more of a back-up than most others."

He continued, "If you spent less time on your ridiculous impeachment hoax, which went haplessly on forever and ended up going nowhere (except increasing my poll numbers), and instead focused on helping the people of New York, then New York would not have been so completely unprepared for the 'invisible enemy.' No wonder AOC and others are thinking about running against you in the primary. If they did, they would likely win."

CALIFORNIA GOV NEWSOM TELLS CNN TRUMP HAS BEEN 'RESPONSIVE' TO STATE'S NEEDS: 'I'D BE LYING' TO SAY OTHERWISE

That was in reference to Rep. Alexandria Ocasio-Cortez, D-N.Y., who some have speculated will seek a Senate primary challenge against Schumer or Sen. Kirsten Gillibrand, D-N.Y.

The president went on to commend New York Governor Andrew Cuomo as well as New York City Mayor Bill de Blasio for "getting the job done," accusing the New York senator of being "missing in action.. except when it comes to the 'press.'"

"I've known you for many years, but I never knew how bad of a senator you are for the state of New York, until I became president," Trump added for signing the letter with his black Sharpie.

Schumer's office responded to the letter, explaining how the Senate Minority Leader has been in frequent contact with the president but expressed his concerns over the appointed "czar" in charge of supply distribution.

"Sen. Schumer explained how he had spoken with the person supposedly in charge of production but felt that person was not up to the job," Schumer's office stated. "Sen. Schumer also told the president that he was concerned about another person nominally responsible for distribution, who had told the media a few days ago he was 'blind to where all the product is.'  Sen. Schumer then recommended the president appoint one senior military officer to oversee both production and distribution."

His office said, "After Sen. Schumer further made clear what he was requesting, the president said he was already in the process of sending a 'very nasty letter' to Sen. Schumer, but he would try to stop it from going out and would apologize to Sen. Schumer if he didn’t stop it in time."

Schumer later took to Twitter with a direct message for Trump.

"When I sent Pres. Trump a serious letter on getting critical medical supplies to our frontline fighters, he responded with a petty, unserious letter," Schumer tweeted. To the President: Americans are dying and losing jobs. Businesses are teetering. Stop the pettiness. Be a leader. Do your job."