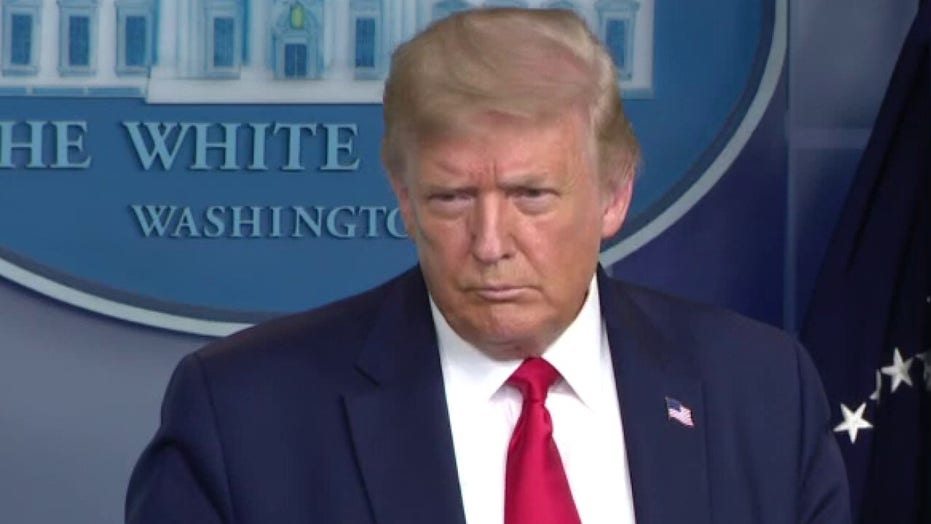 Trump says he told Senate Republicans working on next phase of coronavirus stimulus to move on.

President Trump during his Thursday briefing at the White House said he told Republicans to drop the payroll tax cut from the next coronavirus relief bill since Democrats were not going to sign off on it.

“I’d like to see a payroll tax cut,” Trump said when Fox News’ John Roberts informed him Sen. Majority Leader Mitch McConnell had made an announcement about the new relief package, and it didn’t include the cut.

“Based on that I told Republicans, I said I think a payroll tax would be good, but we’re not going to get it from Democrats. So you still need Democrat votes. I would like to see it but if we're not going to get their votes, I guess we have to go on to the next thing,” he said.

McConnell, R-Ky., said Thursday afternoon that "a framework that will enable Congress to make law and deliver more relief to the American people that is tailored precisely to this phase of the crisis.” McConnell added that the administration had requested more time to review the details of the package, but he hoped to unveil it early next week.

McConnell said the legislation would include a fresh round of direct $1,200 payments, a sequel to the Paycheck Protection Program (PPP) and more than $100 billion to assist schools in their reopening process, but no payroll tax cut, the tax that finances Social Security and Medicare. Cutting it was unpopular with both Democrats and Republicans.

Trump argues cutting payroll taxes would reduce hiring costs and put money in workers' pockets. Some argue doing so would unnecessarily exacerbate the skyrocketing budget deficit. They say that the pandemic, not the hiring costs, are what’s keeping businesses from bringing on new employees.

However, Mnuchin hinted there could be a fifth round of legislation that includes the cut. “You know, there may be a CARES 5.0,” Mnuchin said. “The president is very focused on getting money quickly to workers right now. And the payroll tax takes time. So we'll come back and look at that.”

The president has for weeks made out a payroll tax cut to be his top priority in new coronavirus legislation, in a Fox News interview on Sunday saying he would consider vetoing legislation that did not include it.

On Thursday, he placed the blame squarely on Democrats for opposing the tax cut.

“The Democrats have stated strongly that they won’t approve a Payroll Tax Cut (too bad!) It would be great for workers,” Trump tweeted Thursday. “The Republicans, therefore, didn’t want to ask for it.”

He added: “Dems, as usual, are hurting the working men and women of our Country!”