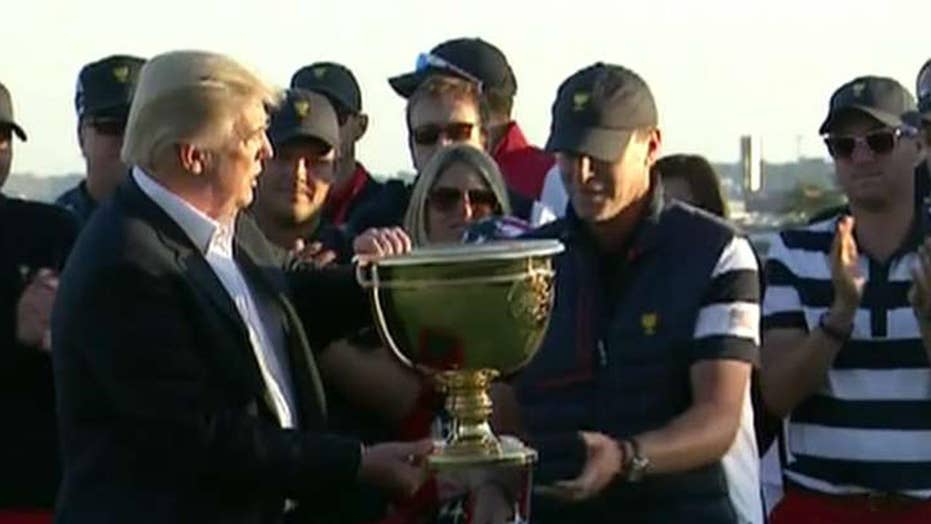 President Donald Trump on Sunday dedicated the Presidents Cup golf trophy to the Americans who survived hurricanes in Texas, Florida and Puerto Rico, while saying the relief effort is “under really great control.”

“On behalf of all of the people of Texas and all of the people of — if you look today and see what’s happening, how horrible it is. But we have it under really great control, Trump said. “Puerto Rico and the people of Florida who have really suffered over this last short period of time with the hurricanes. I want to just remember them and we’re going to dedicate this trophy to all of those people that went through so much, that we love.”

Trump, the honorary chairman of the event, became the first sitting president to attend the matches on the final day.

Before arriving at Liberty National Golf Club, a private club built on a former landfill, in Jersey City, New Jersey, Trump dismissed “politically motivated ingrates” who have questioned his administration’s commitment to the devastation of Hurricane Maria in Puerto Rico.

“We have done a great job with the almost impossible situation in Puerto Rico,” Trump said Sunday on Twitter. “Outside of the Fake News or politically motivated ingrates … people are now starting to recognize the amazing work that has been done by FEMA and our great Military. All buildings now inspected … for safety.

“Thank you to the Governor of P.R. and to all of those who are working so closely with our First Responders. Fantastic job!”

The tweets came after San Juan Mayor Carmen Yulín Cruz on Friday criticized the president’s effort to get supplies, electricity and other relief to the U.S. island.

Cruz also suggested residents were “dying” as a result of the slow response.

“Such poor leadership ability by the Mayor of San Juan, and others in Puerto Rico, who are not able to get their workers to help,” Trump responded Saturday on Twitter. “They want everything to be done for them when it should be a community effort. 10,000 Federal workers now on Island doing a fantastic job.”

He also tweeted: “Results of recovery efforts will speak much louder than complaints by San Juan Mayor. Doing everything we can to help great people of PR!”

The president spent much of the weekend at his New Jersey golf club and then attended the international golf competition near New York City.

He stuck around to give the gold trophy to U.S. Captain Steve Stricker and an American team that won by the most lopsided margin in 17 years.

The president said the players are “a tremendous group of folks” and called them “great champions.”