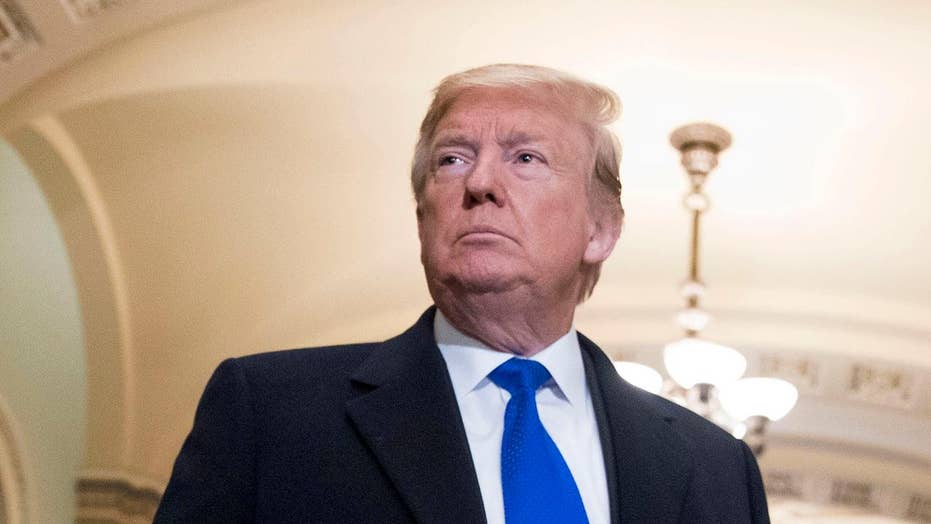 Trump: I knew it was going to get worse when I fired James Comey

President Trump in an exclusive phone interview on Fox News' "Hannity" on Wednesday said the government has repaired “many, many” miles of fencing along the U.S.-Mexico border.

Trump called the construction of the border wall “vital” because human and drug trafficking take place at what he called “soft points” of the border – or parts without fencing.

“Hundreds of miles are already under construction or soon to be under construction," the president told host Sean Hannity. "Billions of dollars will be necessary, it’s absolutely vital if you look at what’s happening at the border.”

He said in the past people had talked about building the wall for $25 billion to $30 billion and said he’s “building it for a fraction of that.”

Meanwhile, U.S. Customs and Border Protection (CBP) reported that 4,000 apprehensions and encounters occurred Monday -- the highest number for a single day in more than a decade. But even more occurred Tuesday.

“Yesterday, that record was broken again - 4,117 in a single day,” CBP added in a Twitter message.

“We’re capturing people that are coming in illegally,” Trump told Hannity. “We’re not just releasing them. In some cases we’re running out of room.”

Following the 35-day partial government shutdown at the beginning of the year, Congress agreed to $1.4 billion for new barriers, short of the $5.7 billion Trump had requested.

He also said the Democrats are “so bad and so corrupt on immigration,” regarding “catch and release” and “chain migration.”

Tuesday, House Democrats failed to override Trump’s veto over his declaration of a national emergency at the border. The vote was just 38 votes short of the two-thirds majority needed.

Trump now plans to move $3.6 billion from military construction projects to use for the wall, and Monday, the Pentagon authorized the transfer of up to $1 billion for 57 miles of “pedestrian fencing” along the border in support of Trump’s emergency declaration.

“If you go to a lot of the generals they will tell you this is a national emergency,” Trump said. “We need to defend our country. People [are] pouring in.”

During the interview, Trump told Hannity they would hold a news conference from San Diego where he said they have completed a stretch of wall.

“A lot of people don’t think we’re building walls. We’re building massive, many, many miles of walls right now and we’re gearing up to do many more,” he added.

In February, construction began in San Diego to replace up to 14 miles of barrier along the Mexican border, the fifth border wall project of his presidency.

He added that hundreds of miles of wall would either be built or renovated in the near future.