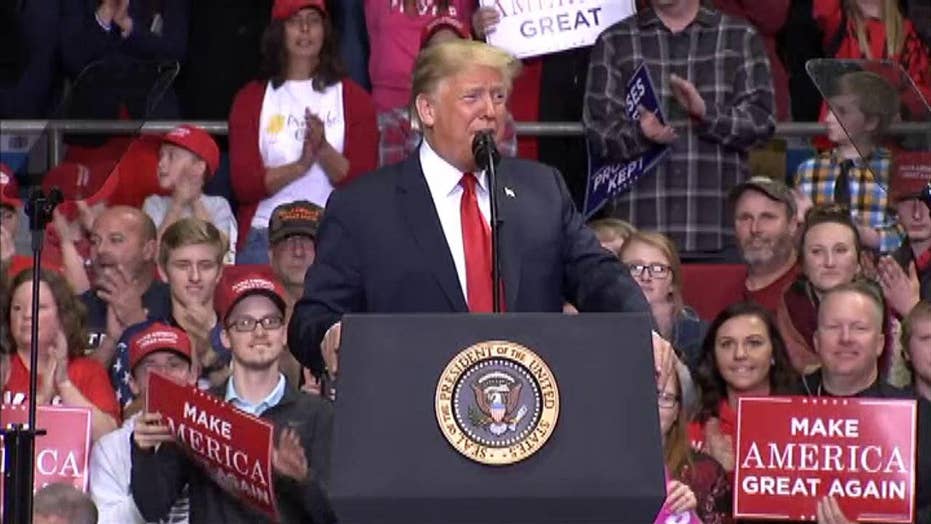 President Trump warns Indiana voters about economic upheaval Democrats could cause in congress.

President Trump, appearing at election-eve rallies in Ohio, Indiana and Missouri, made the case for Republicans and said voters are energized heading into Tuesday’s vote, and said he hasn’t felt such 'electricity' since he was elected president.

"Tomorrow, with your votes, you can stop the radical resistance in its tracks," Trump told the crowd in Cleveland. He added, “Tuesday is your chance to send a message to the Democrat mob and to everyone who has made it their mission to denigrate our movement and to divide our great nation."

"There is something going on," Trump said. "There is an electricity like people have not seen since a date: 2016 November."

The president wrapped up a six-day, 11-state sprint late Monday evening in Cape Girardeau, Mo., where he was introduced by native son Rush Limbaugh.

"I have been watching Trump rallies from the very first one," the conservative talk-show host said. "And to be part of one, folks, I'll tell you, it's the night of a lifetime."

"The people of Missouri are going to send Josh Hawley to the U.S. Senate to keep America's booming," Trump said before touting his accomplishments while in office. He said his administration has helped create 4.5 million jobs and lifted 4.3 million people off food stamps.

"There has never been a better time for the American worker," Trump said. "America's comeback is the envy of the world. We're the hottest nation in the world."

"[T]he one thing that has made and defined (Trump's) presidency more than anything else: promises, promises kept," Hannity said.

In Ohio, Trump campaigned for a slate of Republicans, including state Attorney General Mike DeWine in the Ohio governor’s race against Democrat Richard Cordray. Trump railed against Cordray as a "far-left radical socialist and a “disciple of Elizabeth Warren.”

The president also offered his support to Republican Jim Renacci in his bid to unseat Democrat Sen. Sherrod Brown. Trump won the state with 52 percent of the vote in 2016 but Fox News Power Rankings lists the Senate contest as “likely Democrat.”

“More Americans are working today than ever in our history,” he said at the get-out-the-vote rally in Indiana featuring a boisterous, rowdy crowd.

He called the American Dream: optimism, and said a vote for Republicans shall “continue our extraordinary prosperity.” He warned about Democrats if they take control of any part of government: “They will take a wrecking ball to our economy and to the future of our country.”

He added: "A vote for Democrats is a vote to bring this economic boom crashing down very rapidly."

He spoke about the electricity he feels presently, like at his earlier rally: “There was something going on two years ago, and I felt it, and I feel it again.”

He also had no patience for any resistance.

Trump, mocking the handful of protesters who penetrated the event, said: "We don't want to resist. We want to get things done. We want the opposite." He also told one demonstrator to "go home to Mommy."

He also invited to the stage three top aides: his daughter Ivanka, White House Press Secretary Sarah Sanders and Counselor to the President Kellyanne Conway, Trump said: "You're not allowed to use the word 'beautiful' anymore when you talk about women. It's politically incorrect."

Ivanka Trump, who is also a senior White House adviser, said her father’s administration has created “golden” economic policies and strong jobs: “It’s never been a better time than to be an American worker.”

Sanders' opening line was a swipe at the media: "You'll have to forgive Kellyanne and I -- we're maybe a little speechless — we're not used to friendly crowds."

The Fox News Power Rankings lists both Indiana and Missouri as “tossup” races.

2018 MIDTERM CAMPAIGN PROJECTED TO TOP $5B IN SPENDING, BREAKING RECORDS

After a day of campaigning, Trump isn’t scheduled to return to White House until after 1 a.m.

Before leaving Washington on Monday, the president hopped on a “telephone town hall” with supporters and said flatly, “We have to win tomorrow. We have to have a good victory tomorrow.”

After listing off accomplishments of his presidency like pushing through tax cuts, the president said, “It’s all fragile. Everything I told you about – it can be undone and changed by the Democrats if they get in.”

The president started his day with tweets in support – or in opposition -- to candidates in high-profile races.

In the Michigan Senate race, Trump tweeted: “.@DebbieStabenow voted against Tax Cuts, great Healthcare, Supreme Court Justices and all of the many things the people of Michigan wanted and need. She is an automatic far left vote, controlled by her bosses. John James can be a truly great Senator!”

As for the Florida gubernatorial race, Trump tweeted: “If @AndrewGillum did the same job with Florida that he has done in Tallahassee as Mayor, the State will be a crime ridden, overtaxed mess. @RonDeSantisFL will be a great Governor. VOTE!!!!!!”

In the Missouri Senate race, Trump tweeted: “No matter what she says, Senator Claire McCaskill will always vote against us and the Great State of Missouri! Vote for Josh Hawley - he will be a great Senator!”

In Florida’s Senate race, Trump tweeted: “REMEMBER FLORIDA: I have been President of the United States for almost two years. During that time Senator Bill Nelson didn’t call me once. Rick Scott called constantly requesting dollars plus for Florida. Did a GREAT job on hurricanes. VOTE SCOTT!”