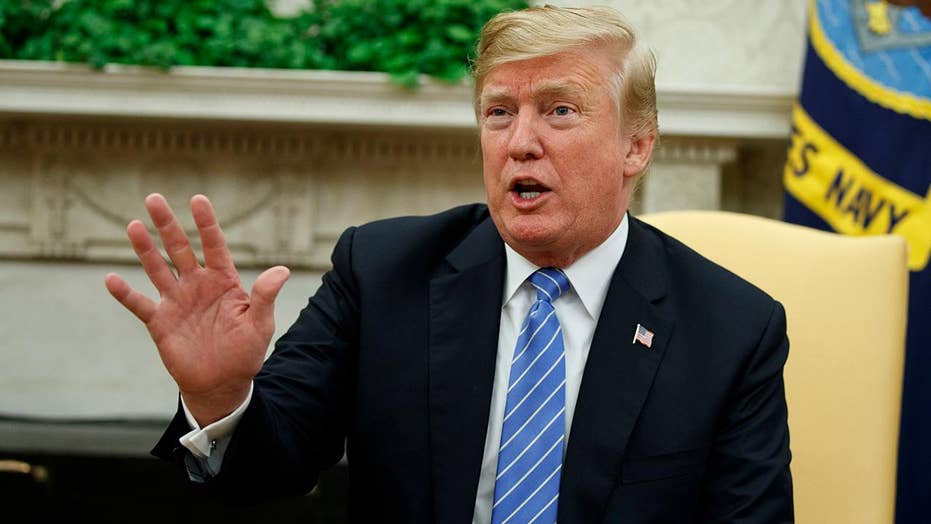 President Trump claimed Thursday the “Fake News” is pushing for a “major confrontation” with Russia, ratcheting up his defense of the summit with Vladimir Putin on the third day of damage control over their controversial joint press conference.

“The Fake News Media wants so badly to see a major confrontation with Russia, even a confrontation that could lead to war. They are pushing so recklessly hard and hate the fact that I’ll probably have a good relationship with Putin. We are doing MUCH better than any other country!” Trump tweeted early Thursday morning.

He also said: "The Fake News Media is going Crazy! They make up stories without any backup, sources or proof. Many of the stories written about me, and the good people surrounding me, are total fiction. Problem is, when you complain you just give them more publicity. But I’ll complain anyway!"

The president’s tweets come after several missteps this week, amid his highly anticipated summit in Helsinki with Putin and a joint press conference where he claims to have misspoken.

During that press conference Monday, Trump said that he doesn’t “see any reason why” Russia would be behind election meddling.

But upon returning to Washington, he was hit with a wave of bipartisan criticism for the comment -- and others -- and walked back the remark. Trump said Tuesday that he meant to say he doesn’t see why Russia “wouldn’t” be responsible.

The walk-back seemed to satisfy some of his Republican critics, but Democrats continued to fume.

Other statements during the press conference, like his declaration that Putin gave a “strong and powerful denial” about meddling in the 2016 election, still seemed to give weight to Putin’s account.

But just as Trump was moving to quell the controversy over his statements, he touched off a new one on Wednesday when he appeared to deny Russia is still targeting the U.S., prompting yet another White House clarification.

Trump made the comment at a Cabinet meeting on Wednesday. Asked if Russia is still targeting the country, the president replied: “No.”

This led to a new wave of condemnations from Democratic lawmakers, who cited his own national intelligence director’s warnings to the contrary.

White House Press Secretary Sarah Sanders chalked up the furor to yet another misunderstanding.

She claimed the president was actually saying “no” to answering more questions, not to whether Russia is still targeting the U.S.

Director of National Intelligence Dan Coats said last week that warning lights on cyberthreats to the U.S. were “blinking red”—and Russia has been the “most aggressive foreign actor” and is continuing efforts to “undermine our democracy,” though not at the same level as in 2016.

Sanders on Wednesday said that the president would meet with his team, and would update reporters when they have an announcement on whether the U.S. will cooperate.

"There was some conversation about it, but there wasn't a commitment made on behalf of the United States," Sanders said. "The president is considering it."

Even keeping the door open to the proposal, though, drew intense criticism from those Putin would want to see questioned.