President Trump said Saturday that Democrats have allowed anti-Semitism to “take root in their party and their country” as the party’s base is pushing it to the left and to positions more critical of Israel.

“They’ve become the party of high taxes, open borders, late-term abortion, crime, witch hunts and delusions, and now the Democrats have even allowed the terrible scourge of anti-Semitism to take root in their party and in their country,” he said in a speech before the Republican Jewish Coalition in Las Vegas. “They’ve allowed that.”

Trump noted that in January, Democrats blocked legislation to confront the Boycott, Divest, Sanctions (BDS) movement against Israel over its treatment of Palestinians. Democrats cited the ongoing government shutdown at the time for their opposition to the bill, saying that only legislation that would reopen the government should be passed.

But Democrats have struggled with accusations of anti-Semitism, a controversy that blew up in March when Rep. Ilhan Omar, D-Minn., suggested that supporters of Israel were pushing for U.S. politicians to declare "allegiance" to that nation.

In February she created still more waves when she suggested that some members of Congress were being paid by the American Israel Public Affairs Committee (AIPAC) to support Israel.

“It’s all about the Benjamins baby,” she tweeted, a remark for which she later apologized.

Those comments led to a broad resolution against bigotry that passed the House -- but that only indirectly condemned Omar’s comments, and did not mention her by name. 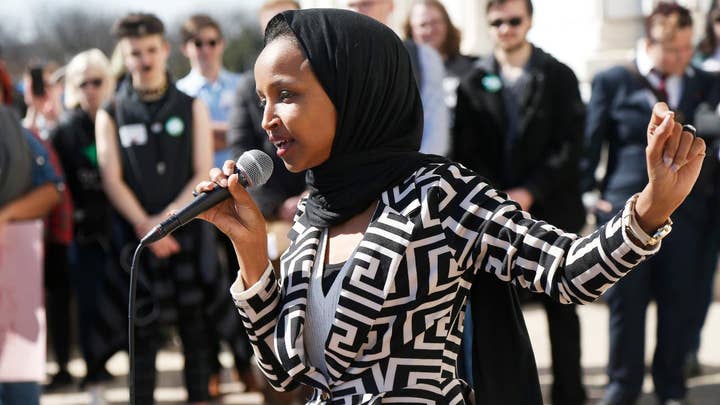 At the beginning of his remarks on Saturday, Trump “thanked” Omar before issuing a mocking apology when the friendly crowd booed the reference.

It wasn’t the only time during the hourlong speech that he made a joke about a serious subject.

On the escalating migration crisis on the southern border, for instance, he said that some migrants claiming asylum are “the roughest people you’ve ever seen.”

“People that look like they should be fighting for the UFC,” he said to laughs from the audience.

He called the asylum system a “scam,” and he mimicked a migrant reading off a lawyer-written script to claim asylum in the U.S.

“‘I am very fearful for my life, I am very worried that I will be accosted if I am sent ... home,’” Trump said, pretending to squint to read a script, before telling the crowd: “No, no he’ll do the accosting.”