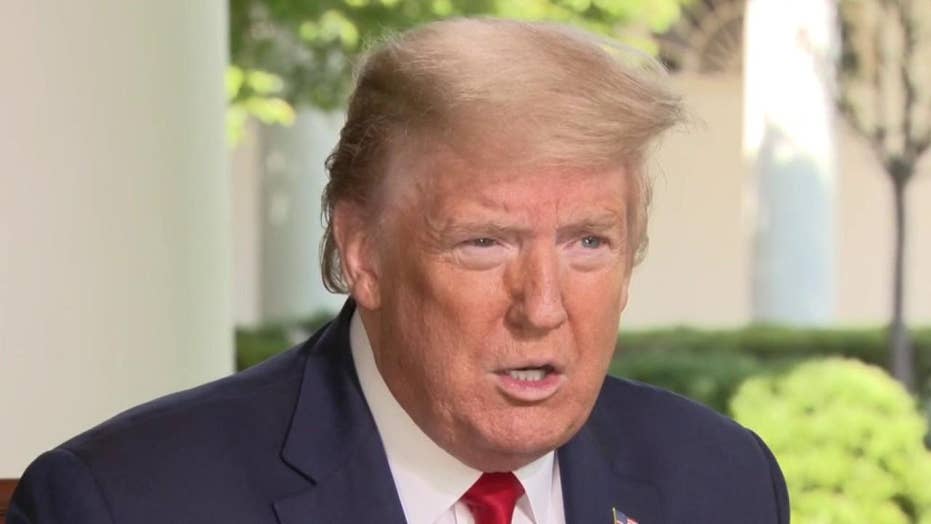 Trump: It's a great time to have a strong dollar

President Trump says it's a good time to have a strong dollar now with low interest rates, even if it's tough for trade.

President Trump, in an interview that aired Thursday morning with Fox Business Network's Maria Bartiromo, said he believes his political critics want a slower reopening of the economy not due to the coronavirus threat, but to hurt him politically in the November election.

The president made those comments in the same interview where he said he disagrees with the director of the National Institute of Allergy and Infectious Diseases (NIAID), Dr. Anthony Fauci, on the measures needed to reopen schools.

When asked if he thinks his political opponents want him to keep the economy closed going into the presidential election, Trump said he does.

"Yeah, I do. I do. I think it's a political thing," Trump told Bartiromo.

Trump sits down with Fox Business' Maria Bartiromo for an interview that aired Thursday morning.

When pushed on whether such a move would be putting money ahead of lives, Trump pushed back.

"The people that want to see the right thing happen, they agree with me. We have to get our country open," Trump said. "You know, if it was up to some people let's keep it closed for a long time ... and watch the United States go down the tubes. Not gonna happen. Never gonna happen on my watch."

Also in the interview, Trump made comments criticizing Fauci on his testimony about reopening schools during a hearing with the Senate Health Committee. Fauci earlier this week did not necessarily weigh in on whether schools should open, but said it's unlikely a vaccine would be ready in time for the school year.

Earlier this week, the White House touted the United States' progress on coronavirus testing, which is a major benchmark many experts and governors have said is necessary to hit before moving to lift stay-at-home orders and business closures.

Trump also noted in the interview that young people tend not to get as sick because of the coronavirus and have lower death rates.

"I think we have to open our schools, young people are very little affected by this," he said.

But that is a point, when made by Sen. Rand Paul, R-Ky., in the Tuesday Senate hearing, that Fauci expressed concerns about.

"We should be humble about what we don't know," Fauci told Paul. "And I think that falls under the fact that we don't know everything about this virus, and we really got to be very careful, particularly when it comes to children. Because the more and more we learn, we're seeing things about what this virus can do that we didn't see from the studies in China or in Europe."

Trump also noted in the Wednesday morning interview that Fauci has supported his earlier move to restrict travel from China in the earlier stages of the coronavirus outbreak.

"He said I saved hundreds of thousands of lives, which is what happened," Trump said. "Everybody disagreed when I did that."

Trump also hit the Chinese government, which knew about the coronavirus outbreak when it signed a trade deal with Trump in January. "I'm very disappointed in China, I will tell you, right now," Trump said.

The president has been pushing to reopen the economy as quickly as possible, emphasizing the harmful economic effects of keeping businesses closed and people out of work, despite pushback from critics that he is essentially sacrificing lives to the economy. But Trump said in his conversation with Bartiromo there are also likely to be health effects of keeping people under stay-at-home orders for such a long time.

"We have to open our country, we have no choice. You know people are dying this way too ... they're dying of this closure ... where they're in their house or their apartment ... they're not allowed to go out," Trump said.

Trump's comments come despite conservative reopening guidelines released by his own administration that Fauci emphasized need to be followed in his Tuesday testimony.

"As I have said many times publicly, what we have worked out is a guideline framework for how to open America again,” Fauci said. In order to proceed to the first of three stages in the reopening guidelines, states would need to see an uninterrupted decrease in coronavirus cases over a 14-day period.

Fauci warned that prematurely lifting coronavirus restrictions closing schools and businesses and limiting travel would lead to "suffering and death" and "turn the clock back instead of going forward."