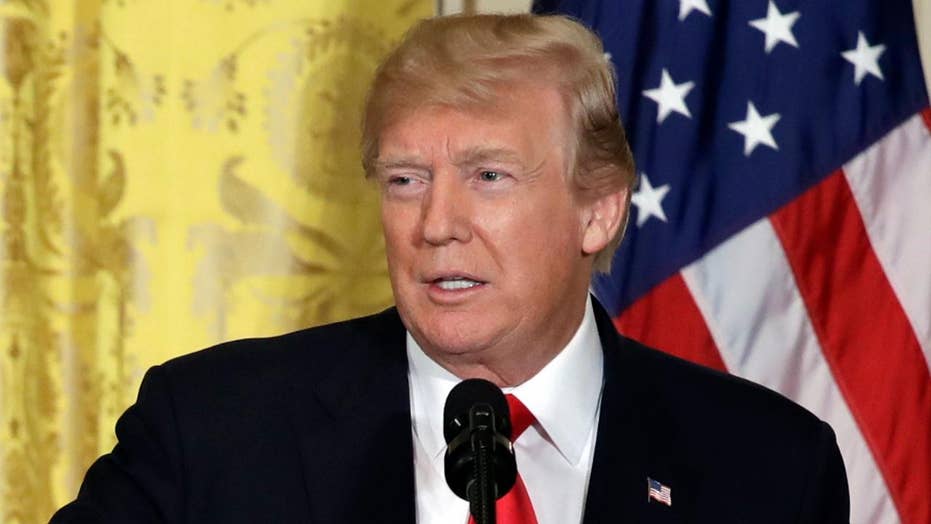 In joint press conference with Prime Minister Erna Solberg, President Trump encourages Norway to spend 2 percent of its GDP on defense as outlined by NATO guidelines.

President Trump flatly stated Wednesday he will only agree to a deal with Congress on immigration if it includes funding for his long-promised wall along the border with Mexico.

Asked during a press conference with the prime minister of Norway if he’s willing to sign a deal that does not include wall funding, Trump said: “No, it’s going to include the wall.”

Trump said “any solution has to include the wall because without the wall it all doesn't work.”

Trump’s comments come after he held a lengthy bipartisan immigration meeting on Tuesday with lawmakers on the issue. The president was clearly in a deal-making mood as he presided over the session, featuring Republican and Democratic lawmakers, that was replayed on television and showed him trying to reach common ground with both sides.

Democrats' central demand is legislation to preserve the Obama-era DACA program, which was ended by Trump last year and shields illegal immigrants brought to the United States as children from deportation. Democrats oppose funding a wall, which they say is unnecessary and costly.

“I would imagine that the people in the room both Democrat and Republican, I really believe they're going to come up with a solution to the DACA problem which has been going on for a long time,” Trump said, alongside Prime Minister Erna Solberg of Norway in the East Room.

Statements from Trump and his allies on Wednesday could serve to ease the concerns of some conservatives -- who reacted with disappointment to Trump’s meeting with lawmakers, expressing worry that his willingness to work with Democrats on the issue would lead to him abandoning his campaign promises to be tough on illegal immigration.

While Trump offered assurances at this press conference, a House GOP immigration bill being rolled out Wednesday likewise includes the tough measures championed by candidate Trump in 2016, including a wall, ending the visa lottery green card program and ending chain migration.

Vice President Pence echoed the president's message during an exclusive interview with Martha MacCallum, airing on Fox News’ "The Story" at 7 p.m. Wednesday.

"There is no deal on DACA without a wall. [Or] without ending the visa lottery program and ending the kind of chain migration that has resulted in people coming into this country that have done harm to Americans in recent months," he said.