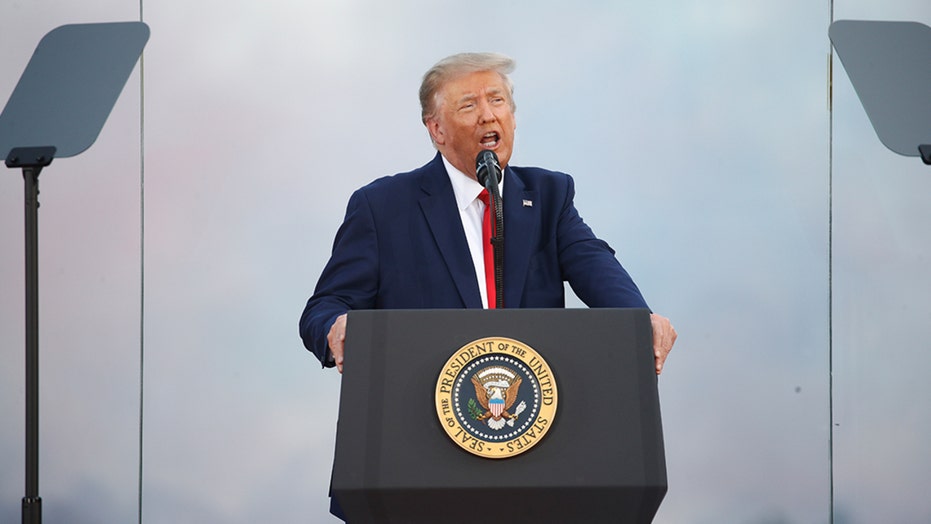 President Trump remarks at the 2020 'Salute to America' event

President Donald Trump gives a speech at the 2020 'Salute to America' event on Independence Day.

President Trump evoked the history of American patriots who defeated Nazis, toppled communists and chased down terrorists, but warned of another threat now in today's political climate -- the "radical left."

In a Fourth of July speech at the White House in the midst of the coronavirus pandemic and racial unrest, Trump made a full-throated defense of America's past and said he won't allow an "angry mob" to tear down statues, "indoctrinate our children" or "trample" freedoms.

“We are now in the process of defeating the radical left," Trump said to hundreds at the White House lawn Independence Day celebration. "The Marxists. The anarchists. The agitators. The looters, and people who in many instances, have absolutely no clue what they are doing.”

Trump, who has railed against the "cancel culture," refused to let the coronavirus pandemic close down a grand Fourth of July celebration in Washington, D.C., despite objections from local officials over rising infection rates.

"Thanks to the courage of those patriots on July 4, 1776, the American Republic stands today as the greatest, most exceptional and most virtuous nation in the history of the world," Trump said.

Trump praised the ingenuity of American workers and lauded American heroes who defeated Nazis and dethroned fascists. But as Black Lives Matter protesters have taken to the streets in the wake of George Floyd's death to demand racial justice -- with some activists taking down Confederate statues and other relics -- Trump warned of a new front that America must overcome: left-wing radicals seeking to destroy history.

Trump accused the media of "slander" for sowing racial divisions and said the press dishonors the memory of soldiers "by insisting they fought for racism." He said the country's heritage belongs to citizens of every background, regardless of race.

ANTONIN SCALIA, JACKIE ROBINSON AMONG THOSE PICKED FOR TRUMP’S ‘NATIONAL GARDEN’ OF HEROES

"Our past is not a burden to be cast away,” Trump said. “... This incredible story of American progress is the story of each generation picking up where the last one finished.”

Trump paid tribute to the military and those who founded America 244 years ago, and talked of his plans to create a "national garden" of American heroes.

"We will not throw away our heroes. We will honor them, and we will prove worthy of their sacrifice," Trump said.

Trump acknowledged the struggles of the coronavirus pandemic, which "goes out in one area and rears back its ugly face in another area." He touted advancements on testing, producing ventilators, and said the U.S. will likely have a vaccine or therapeutic solution before the end of the year. He blamed China for a "cover-up" about the virus's origin and said the country must be held accountable for spreading a global pandemic.

President Donald Trump and first lady Melania Trump place their hands on their chest during a "Salute to America" event on the South Lawn of the White House, Saturday, July 4, 2020, in Washington. (AP Photo/Patrick Semansky)

Trump had already kicked off the Independence Day weekend with a defiant speech at Mount Rushmore Friday where he stood up to the "cancel culture" of racial justice activists and those who are trying to wipe out American history, tear down statues and defame heroes.

Just hours before his White House address Saturday, Trump retweeted a post from a conservative author pointing out the hypocrisy from the "PC Coronavirus Police" that protesting America is safe, but celebrating America is unsafe.

President Donald Trump and first lady Melania Trump appear at a "Salute to America" event on the South Lawn of the White House, Saturday, July 4, 2020, in Washington. (AP Photo/Patrick Semansky)

Trump sought to make a sharp contrast to presumptive White House opponent Joe Biden, who put out an Independence Day message saying America has never lived up to the founding idea of equality -- evoking slavery and George Floyd's death -- and called on the country to address "systemic racism." A Trump aide called Biden's message to Americans on the Fourth of July "truly shocking."

"Biden opens by saying that America has 'NEVER lived up to' our ideals, then goes on to denigrate Thomas Jefferson, evoke a series of the very worst moments of our history, accuse the country of systemic racism, cast us as a bad people whose conscience is 'gnawed at' by principles he says we have 'never'  embodied, and then go on to say 'American history is no fairy tale,' and suggest that only by voting for him can America redeem itself from this terrible story," the Trump aide said.

HOW FOURTH OF JULY IN 2020 WILL BE UNLIKE ANY OTHER: NO BEACH, NO BOOZE, NO BBQ

As the coronavirus is far from contained -- with more than 50,000 new cases daily -- public health officials have warned against large-scale gatherings and cities have minimized celebrations by canceling fireworks, closing beaches and even banning spectators at Nathan’s Famous July Fourth hot dog-eating contest.

COVID-19 cases have grown at a rate not experienced even during the deadliest phase of the pandemic in the spring, with Florida health officials recording another record-breaking day.

District of Columbia Mayor Muriel Bowser raised objections about the fireworks celebration at the nation's capital but noted she doesn't control the federal land. She warned the federal government about the dangers of such a large crowd and told her constituents: “Just because someone invites you to a party doesn’t mean you have to go."

It appears the COVID pandemic and the scorching heat kept the large crowds away from the National Mall. Protestors were virtually nonexistent all day on the Mall, but hundreds of protesters were spotted closer to the White House at the recently named Black Lives Matter Plaza.

The Department of Interior had planned a major celebration with more than 10,000 fireworks expected to light up the National Mall for about 35 minutes.

Officials had said they would hand out 300,000 face coverings to spectators at the National Mall. Interior Department Secretary David Bernhardt said visitors would be encouraged to wear masks and keep a six-foot distance from one another. But there was no indication masks would be mandatory.

Kicking off the celebration, military flyovers saluted the skies in Boston, New York City, Philadelphia and Baltimore. The military planes joined the larger air show in Washington, D.C., with a demonstration by the U.S. Army Golden Knights Parachute Team and a 21-gun salute by the military’s 3rd Infantry Regiment, known as The Old Guard.

Trump’s own plane, known as Air Force One when he’s aboard, kicked off the festivities with a flyover above the president and First Lady. The air show included an array of heritage planes from past wars.

The White House said this year's celebration had a "different look than 2019" due to the coronavirus concerns.

Last year, Trump held a big Independence Day event on the National Mall with armored military vehicles on display and gave a speech from the Lincoln Memorial -- to the dismay of Democrats, who accused Trump of trying to politicize the holiday.

This year, Trump and First Lady Melania Trump invited frontline workers -- police, doctors, nurses and military members -- to the White House to watch the airshows and fireworks with their families.

The White House stressed that social distancing would be observed and facial coverings and personal hand sanitizers were provided.

Several hundred guests were seated at round tables on the White House lawn in 88-degree heat, with roughly a third of them wearing masks.

Guests waved miniature American flags to the sounds of patriotic music performed by the US Air Force Band, followed by the President's Own Marine Band and the U.S. Navy Band Sea Chanters.

"The American people have shown tremendous courage and spirit, particularly our amazing frontline workers, in the fight against this global pandemic just as our forefathers did in the fight to secure our independence, and both deserve celebration on America’s birthday this year," White House Deputy Press Secretary Judd Deere said in a statement.