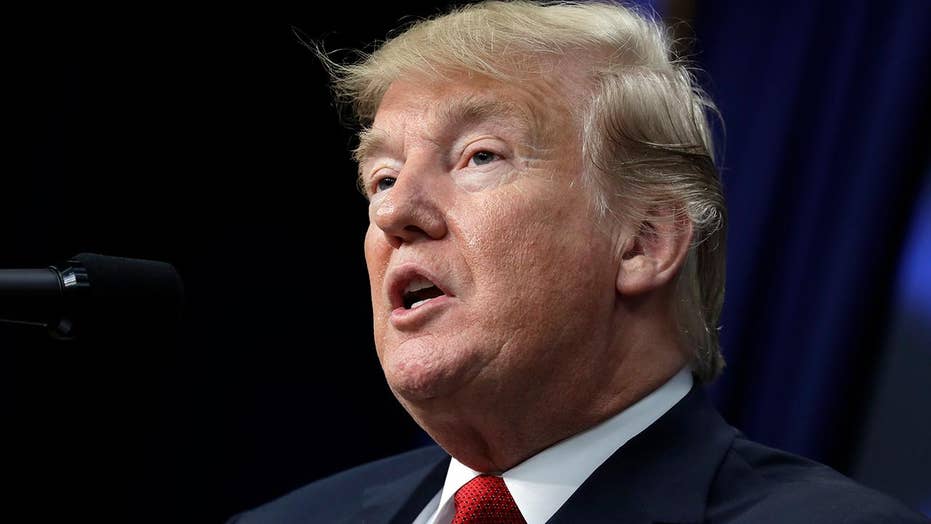 President says media are ignoring the pain and suffering of 'Angel Families' and human toll of illegal immigration pledges action.

President Trump on Friday blasted what he described as a media double standard on immigration, as he honored families whose loved ones were killed by illegal immigrants and accused the press of ignoring them to focus on the plight of migrants caught crossing the border.

After a week of saturation coverage on illegal immigrant parents separated from their children -- a policy Trump reversed under public and political pressure -- the president stressed that so-called Angel Families have been “permanently separated.”

The families, whose children and other relatives were killed by illegal immigrants, echoed that message during the White House event.

“You don’t hear these stories,” said Steve Ronnebeck, whose 21-year-old son Grant was killed by an illegal immigrant over a pack of cigarettes. “But this is permanent separation.”

The family members joined Trump and Vice President Pence at the event Friday, holding photos of their departed loved ones.

“These are the American citizens permanently separated from their loved ones. The word you have to think about is ‘permanently,’” Trump said Friday. “Because they were killed by illegal immigrants. These are the families that the media ignores. This is a very unfair situation.”

The president was making a clear attempt to underscore the stakes in his push to crack down on illegal immigration, while countering critical media coverage.

His administration's tough "zero tolerance" policies seeking prosecution for all illegal border crossers spurred bipartisan outrage this week, as images and accounts emerged of families being separated as a result. Trump backed off by signing an executive order this week allowing families to stay together during these proceedings, while the status of such enforcement efforts remains unclear.

Trump, though, accused the media and Democratic lawmakers of ignoring the other side of the issue -- drug crimes, MS-13 gang activity and killings like the ones that tore apart the families  that visited the White House on Friday.

Trump added: “Where is the media outrage over the catch and release policy? Where is the condemnation of Democrats in sanctuary cities that release violent criminals into our communities?”

"Your loss will not have been in vain," Trump said. "We will secure our borders and we will make sure they are properly taken care of. The word will get out. We’re going to have a safe country."

One Angel mother, Laura Wilkerson, took the stage following the president’s remarks, describing the loss of her 18-year-old son Josh in 2010.

“Josh was brutally tortured, strangled over and over, set on fire after death. His last hours were brutal. None of our kids had a minute to say goodbye,” Wilkerson said. “We weren’t lucky enough to be separated for five days or 10 days. We are separated permanently.”

Wilkerson said when she wants to see her son, “we go to the cemetery.”

“This is permanent separation,” Wilkerson said. “It’s the media that won’t share it with other people. Thankfully I will see him again in heaven.”

While Trump stresses the importance of securing the border, efforts in Congress to pass a sweeping immigration bill are faltering.

House Republicans have pushed off a vote on a key bill until next week, but Trump on Friday threw another wrench into the process by suggesting they should "stop wasting their time" until after the midterms.

GOP lawmakers are still pressing ahead with attempts to bring legislation to the floor next week.