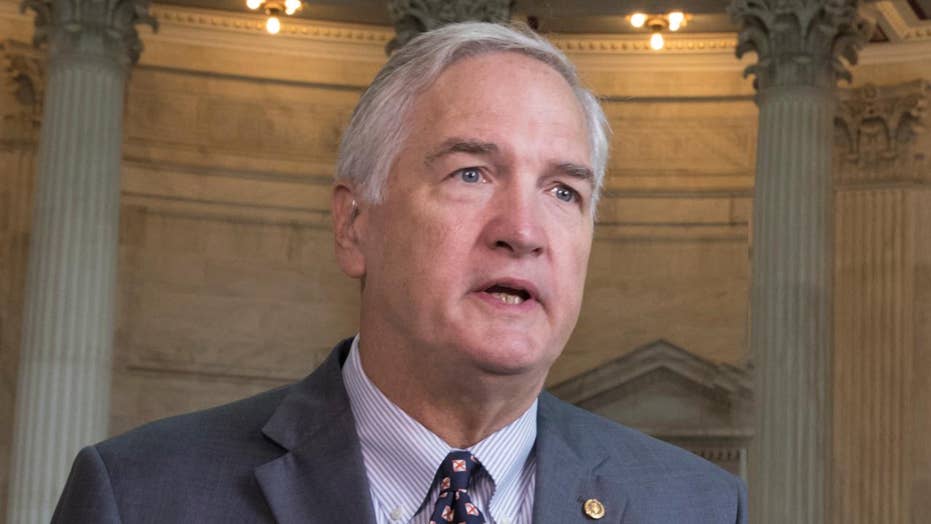 In between ratcheting up the rhetoric on North Korea and taunting Mitch McConnell – all while on vacation at his New Jersey golf club – President Trump did something else unusual this week: He endorsed the establishment pick in Alabama's upcoming Senate GOP primary.

The president is now facing a backlash from his usual conservative media allies for stepping into the race in favor of incumbent Sen. Luther Strange.

Some are irked that Trump sided with the mild-mannered Strange over Alabama Rep. Mo Brooks, a conservative with a penchant for provocative comments who has been endorsed by Ann Coulter, Laura Ingraham, Mark Levin and Sean Hannity.

“I love him, but that was completely idiotic,” Coulter complained to Breitbart News this week about the president's endorsement.

Trump unexpectedly tweeted his support Tuesday for Strange, who has the emphatic backing of Senate Majority Leader McConnell. The endorsement is significant because the top candidates have been portraying themselves as loyal advocates for the president in a state where Trump remains widely popular.

Strange, the state’s former attorney general who was once a lobbyist, was appointed to the seat in April after then-Sen. Jeff Sessions joined the Trump administration. Trump's endorsement was all the stranger – so to speak – considering he backed McConnell's pick even as he chastised the Senate GOP leader for not getting a health care bill passed.

“What has Trump gotten from McConnell?” Coulter asked after the endorsement. “But he’s still sucking up to establishment Republicans.”

Levin, the syndicated conservative radio host who is sympathetic to Trump, vented on Facebook about “Trump's pathetic endorsement of Luther Strange, McConnell's RINO puppet, screwing conservatives in Alabama and across the nation.”

While Strange has established a conservative voting record, his critics have painted him as someone too close to the GOP establishment.

Erick Erickson, the conservative radio host who has been critical of Trump in the past, argued the president was given bad political advice, saying: “This is not how the president drains the swamp.”

“Strange is a pillar of the establishment status quo and will not rock Mitch McConnell’s boat,” Erickson wrote for The Resurgent website. “In fact, Strange is one of McConnell’s oar hands in the boat.”

ERICK ERICKSON: MR. TRUMP, THIS IS HOW YOU DRAIN THE SWAMP?!

The primary to fill the seat once held by now-Attorney General Sessions is set for Tuesday. A runoff will be held Sept. 26 if no candidate gets more than 50 percent of the vote, which seems likely in the crowded field.

Trump weighed into the race with a single tweet on Tuesday evening.

“Senator Luther Strange has done a great job representing the people of the Great State of Alabama,” Trump tweeted. “He has my complete and total endorsement!”

Still reeling from Trump’s endorsement of Strange, Brooks on Friday released a new ad, which his campaign called a “direct address to President Trump.”

“Others attack our president,” Strange says in the ad. “I’m fighting with him to drain the swamp and repeal ObamaCare.”

Strange said in a Thursday statement he was "deeply honored and humbled" to get the president's endorsement.

During the 2016 Republican presidential primary, Brooks supported Texas Sen. Ted Cruz, something that has been used to paint him as insufficiently pro-Trump. The McConnell-backed Senate Leadership Fund has been spending millions running television ads of Brooks’ past critical comments about Trump to try to drive a wedge between him and the president’s supporters.

But the race isn’t just between Strange and Brooks: the other major candidate in the race, former Alabama Supreme Court Chief Justice Roy Moore, is also fighting for a place in the likely runoff. Recent polling in Alabama has shown Moore, who is enthusiastically supported by some Christian conservatives, leading both Strange and Brooks.

Moore, who traditionally rides a horse to the polls on election day, is beloved by his supporters in Alabama after being removed twice from his position on Alabama’s Supreme Court. Such loyalty could be beneficial in a special election where turnout is likely to be low.

In 2003, Moore refused to remove a bust of the Ten Commandments from the state’s judicial building despite orders from a federal court. In 2016, he was removed the bench for ordering Alabama judges to defy federal court orders on gay marriage.

He, too, has been endorsed by national figures: Moore’s campaign announced Thursday the endorsement of Duck Dynasty’s Phil Robertson. Earlier this week, actor Chuck Norris announced his support for Moore.