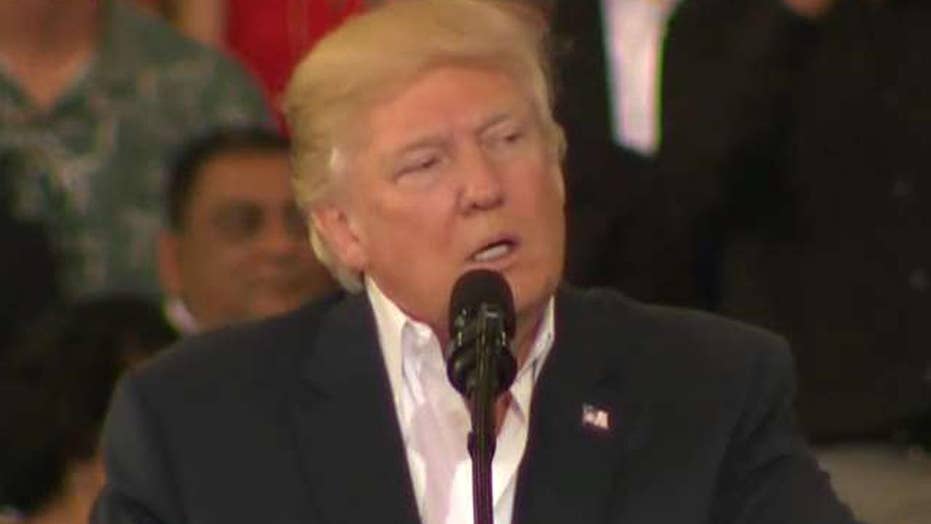 President speaks out at Florida rally

President Trump returned Saturday to campaign mode -- holding a rally in a Florida airport hangar in which he again railed against the “dishonest media” and repeated his promises to build a “beautiful” border wall, replace “disastrous” ObamaCare and other familiar lines that rallied him to an unexpected White House win.

The roughly 50-minute speech outside Melbourne, Florida, was quintessential Trump -- with the president vowing to help disillusioned Americans find better jobs and live safer, while attacking the news media for unfavorable stories and calling it “a big part of the problem” toward his mission to “make America great again.”

“I am here to tell you about our great progress … and our incredible plans for our future,” said Trump, who since officially taking over the White House in late-January has been unable to hold campaign-style rallies. “I am here because I want to be among my friends and among my people. This was truly a great movement.”

Trump essentially picked up from where he left off during Thursday’s freewheeling, 77-minute press conference in which he accused reporters of knowingly writing incorrect stories to hurt his young administration and perpetuating damaging “fake news.”

“I also want to talk to you without the filters of fake news,” Trump told the estimated crowd of 9,000 at the Orlando Melbourne International Airport near Melbourne. “They have their own agenda.”

On Saturday, he also repeated what he said Thursday about his administration running like a “fine-tuned machine” and that he inherited “one big mess,” knocking back criticism about a rocky start and suggestions that he and his administration are working in coordination with Russia.

“Thank you,” he said. “This is a state where we all had great victory together.”

The rally, which included about 2,500 protesters outside, also included the kind of unscripted, unconventional stage-craft that riveted voters for roughly 18 months.

This time, first lady Melania Trump started the rally with The Lord’s Prayer. And Trump brought supporter Gene Huber on stage to speak, then admitted such impromptu acts rattle the Secret Service agents who protect him.

He has continued to do them, although with smaller crowds, throughout the early part of the transition, during what he called a "thank you" tour.

But until this week, Trump has mostly relied on Twitter to sidestep reporters and on spokespeople, who have struggled at times to deliver his agenda -- including plans to temporarily ban travel from seven mostly Muslim nations -- to a largely combative press corps.

The event Saturday was put on by Trump's campaign, rather than the White House.

“I hear your demands. I hear your voices,” Trump said. “And I promise you, I will deliver.”

Asked if the rally was for the 2020 election, spokeswoman Sarah Huckabee Sanders called it "a campaign rally for America."

Asked by reporters aboard Air Force One if a campaign rally was too early, Trump said that "life is a campaign" and that making America great again is a campaign. He added that "it's not easy, especially when we're also fighting the press and the media."

The speech was not without Trump’s familiar, tough talk on crime, border security, radical Islamic terrorism and illegal immigration, too.

“I know you want safer neighborhoods where the streets belong to families and communities, not gang members and drug dealers who right now, as I speak, are being thrown out of the country and will not be let back in,” he said. “We will have strong borders. … Get them to hell out of here.”