Kevin Corke reports from the White House on what the administration is saying about the president's speech.

President Trump will use his first State of the Union address on Tuesday night to extend an olive branch across the aisle and signal he’s willing to make bipartisan deals on second-year-agenda priorities like immigration and infrastructure, officials say.

But what’s less clear is whether the president will get buy-in from Democrats, who have been bashing his immigration deal proposals and who are wary of helping him secure policy victories in a midterm election year.

Former speechwriters on goals of State of the Union address

“I think Donald Trump is going to offer the Democrats certain deals,” Bill McGurn, a former speechwriter to George W. Bush, said on “Fox and Friends” ahead of the speech. “They may not like the terms [on] immigration, infrastructure and so forth. One of the questions will be: can they take yes for an answer?”

A senior administration official said Trump will emphasize his trillion-dollar infrastructure plan to rebuild the country’s roads, bridges, ports and tracks during the annual speech to Congress.

The official also said the president will tout the framework his administration released last week for an immigration deal that includes a path to citizenship for illegal immigrants brought to the United States as children in return for funding for his wall along the Mexico border.

TRUMP IMMIGRATION PROPOSAL COULD PROVIDE PATH TO CITIZENSHIP FOR 1.8 MILLION IN US ILLEGALLY

“The president has offered a compromise solution, showing real leadership that reaches across the aisle,” White House Deputy Press Secretary Raj Shah told Fox News on Monday. “We’re going to see if Democrats are serious about border security. We’re going to see if they actually want to fix a problem or demagogue it.”

Over the weekend, the president lamented that Democrats have, so far, rejected his immigration offer.

“I have offered DACA a wonderful deal, including a doubling in the number of recipients & a twelve year pathway to citizenship, for two reasons: (1) Because the Republicans want to fix a long time terrible problem. (2) To show that Democrats do not want to solve DACA, only use it!” he tweeted.

He added: “Democrats are not interested in Border Safety & Security or in the funding and rebuilding of our Military. They are only interested in Obstruction!”

In Tuesday night’s speech, the president, like other presidents before him, is also expected to use the speech to tout the successes of the last year, such as getting Neil Gorsuch confirmed on the Supreme Court and signing the GOP's tax reform bill.

“Look, we have an economy that's booming. ISIS is on the run. We’re remaking the judiciary in a way that actually believes in upholding the Constitution,” Sanders said. “There are some great things happening in this country.” 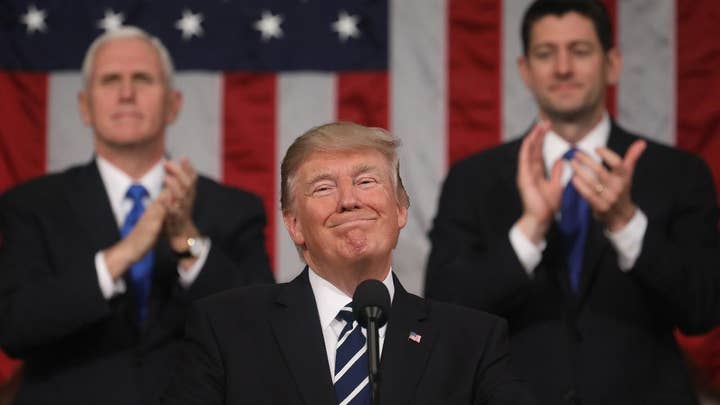 The president also will talk up the economic boom and stock market record over the last year, emphasize his belief in fair and reciprocal trade and discuss his administration’s efforts to combat North Korea’s escalating behavior, the senior administration official said.

A sign of the tension between the president and Democrats: multiple liberal lawmakers are boycotting the speech, with Texas Rep. Frederica Wilson saying Trump doesn’t deserve “to be honored at this time.” A number of other Democrats have announced plans to bring DACA recipients as their guests to the speech.

Members of the Congressional Black Caucus will likely engage in a number of “silent” protests during the speech, Fox News has learned. For example, lawmakers in the caucus were encouraged to wear traditional kente cloth in protest of Trump's reported comments about immigration from “s---hole countries,” many of them in Africa.

Sanders said first lady Melania Trump and all of the president’s children – with the exception of 11-year-old Barron Trump – will attend the primetime speech at the Capitol.

It’s customary for presidents to travel to promote their message after delivering a State of the Union address, but Sanders declined to say Monday whether Trump would partake in that tradition.