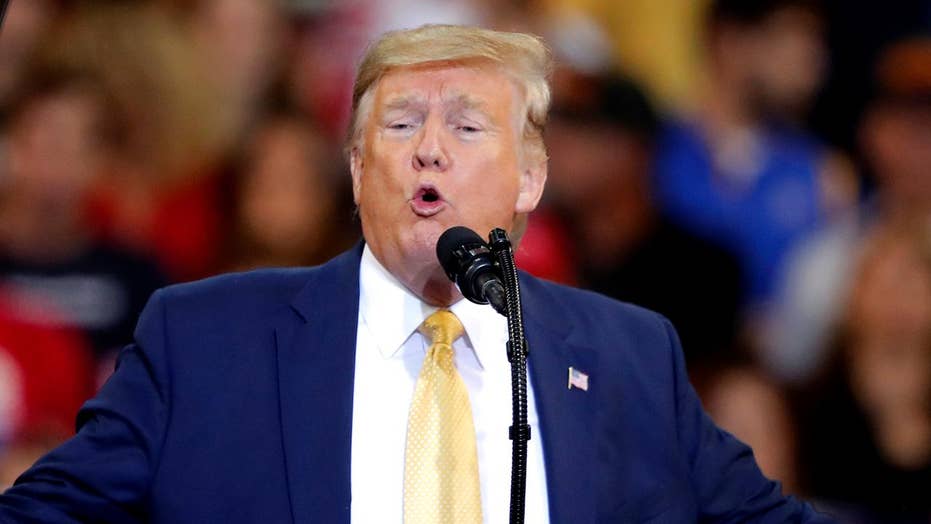 President Trump asks Louisianans to cast their votes ahead of the LSU versus the University of Florida football game.

In his second rally in as many nights -- following Thursday's rally in Minneapolis -- Trump also ridiculed the ongoing impeachment inquiry spearheaded by House Democrats, whom he called "scammers and con artists,"

"They know they can't win an election," Trump told a packed arena in Lake Charles, La., "so they're pursuing an illegal, unconstitutional bulls--- impeachment."

"They know they can't win an election so they're pursuing an illegal, unconstitutional bulls--- impeachment."

The president's use of the barnyard epithet drew a roar from the crowd, just as a profane joke about former President Barack Obama and Vice President Joe Biden did a night earlier in Minnesota. On Friday, Pelosi described Trump's Obama-Biden crack as "disgraceful," possibly prompting the president's Louisiana remark about the speaker.

On Friday, Trump also attacked Biden and his son Hunter Biden over their Ukrainian business dealings for the second night in a row, accusing the media of covering up potential Biden corruption and complaining that if any of his children were similarly accused, the media wouldn't call the allegations unsubstantiated — "They would be saying, 'Where's the nearest cell?'"

The president decried the "rage-filled Democrat Party that has gone completely insane" accusing them of waging a "nonstop battle" to "overthrow" his presidency.

"This is the witch hunt," he said. "They've been trying to stop us for three years with a lot of crap."

"Tomorrow you will head to the polls and vote to replace a liberal Democrat who has sold you out, John Bel Edwards, with a great Republican governor," Trump said in his remarks, encouraging Louisianians to get to the polls before Saturday night's big college football matchup between unbeaten Louisiana State University and the University of Florida or else they would feel guilty and "it will ruin your entire afternoon."

The president was joined onstage by both U.S. Rep. Ralph Abraham and businessman Eddie Rispone, but did not endorse either candidate in order to maximize chances that Edwards will fall below the 50 percent vote threshold needed to avoid a runoff in Saturday's gubernatorial "jungle primary," in which all the candidates appear on a single ballot.

"You're not allowed to hit your Republican opponent, you're only allowed to hit John Bel Edwards," Trump said, extending an olive branch between the two GOP candidates, who have been at loggerheads in the race to the governor's mansion.

The president's trip to Louisiana came one day after another fiery rally in Minneapolis, during which Trump also slammed House Democrats and their impeachment inquiry against him.

The president touted the country's economy and boasted about the truce reached with China just hours before he landed in Louisiana, which stipulates that China will purchase up to $50 billion worth of agricultural goods from American farmers and also will postpone tariffs on Chinese goods that were originally set to take effect next week.

"I just made a great China deal today for energy, for the farmers, for the banks... I want to tell you, I got China to order a lot!"

He did not mention the growing issue of censorship in the U.S. over ongoing pro-democracy protests in Hong Kong.

"We've ended the war on American energy, and with your help, right here in Louisiana, the United States is now the number one producer of oil and natural gas anywhere on the planet!" Trump also boasted.

He also slammed Edwards for the state's tax hike, which was passed with Republican support.

"You are going to fire your Democratic governor who has done a lousy job and send a great Republican to the governor's mansion," Trump said.

Other top Republicans, including Vice President Pence and Donald Trump Jr., have paid visits to the state, which Trump won by nearly 20 percentage points in 2016.

Neither Abraham nor Rispone has been able to break away as the top competitor, even as Rispone poured $11 million of his own personal wealth into the campaign. Party leaders' efforts to keep the men from fighting each other have failed, raising concerns the backbiting could wound both GOP contenders and help Edwards. Republicans blame attacks among their own candidates for helping to elect Edwards four years ago.

Edwards isn't the type of liberal, anti-Trump Democrat with whom the president usually clashes. 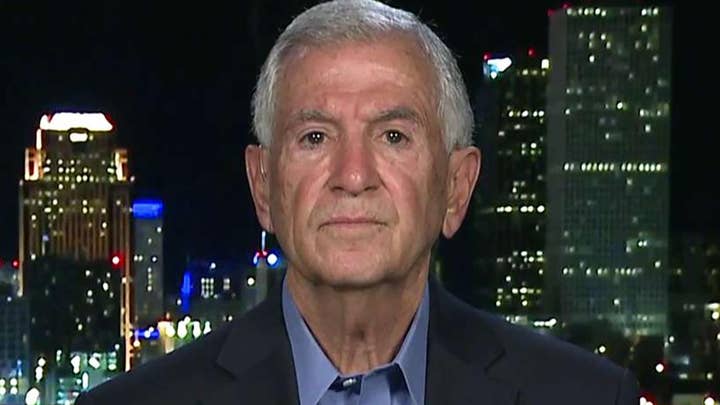 Louisiana's governor is an anti-abortion, pro-gun West Point graduate who avoids criticizing Trump, talks about his strong rapport with the White House and calls the impeachment inquiry a distraction for Washington.

While Edwards' efforts to keep the president at bay in the governor's race have been unsuccessful, the Democratic incumbent isn't complaining about the rallies. Instead, he has downplayed them, calling it unsurprising that Trump backs members of his own party in the "hyperpartisan" environment of Washington. He said he would continue to "work well" with the president and focus on his own, bipartisan approach to governing. 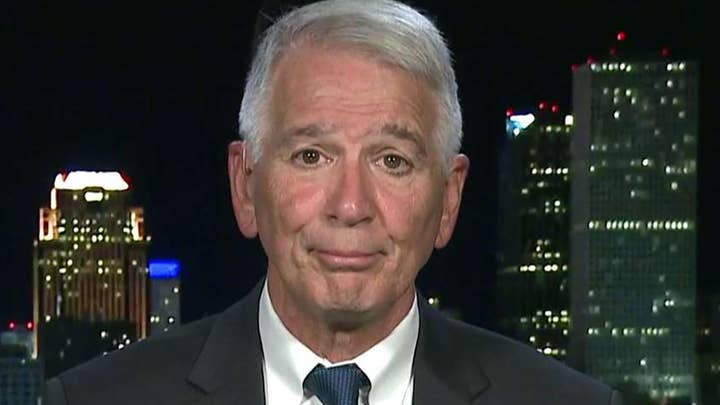 "When my opponents realized just how much support my campaign had from the people of Louisiana, they started calling in help from forces in Washington, D.C.," Edwards said. "My opponents are obsessed with political partisanship because the only way they think they can win is to divide the state of Louisiana."

Republicans nationally have targeted Edwards for ouster since his longshot election victory four years ago. But work to unify around one major contender failed, with the state's top-tier, well-known GOP officials passing on the race.

Trump was also joined on stage by Sen. John Kennedy, R-La., who said: "I told you, Donald J. Trump loves Louisiana like the devil loves sin." 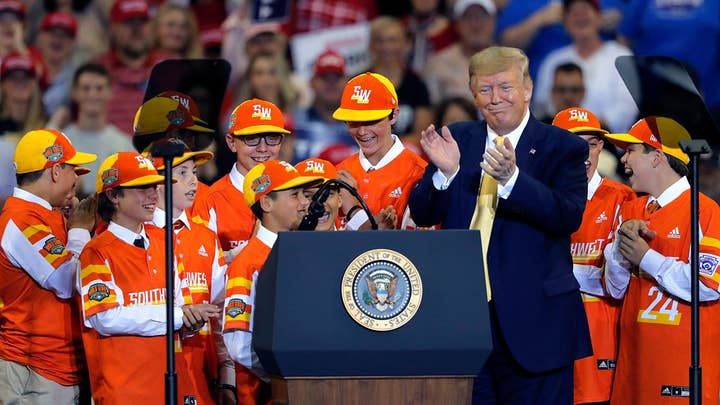 He also invited the Eastbank All-Stars, the Little League baseball championship team that joined him at the White House earlier in the day and then flew on Air Force One to the rally, to come on stage in Louisiana.