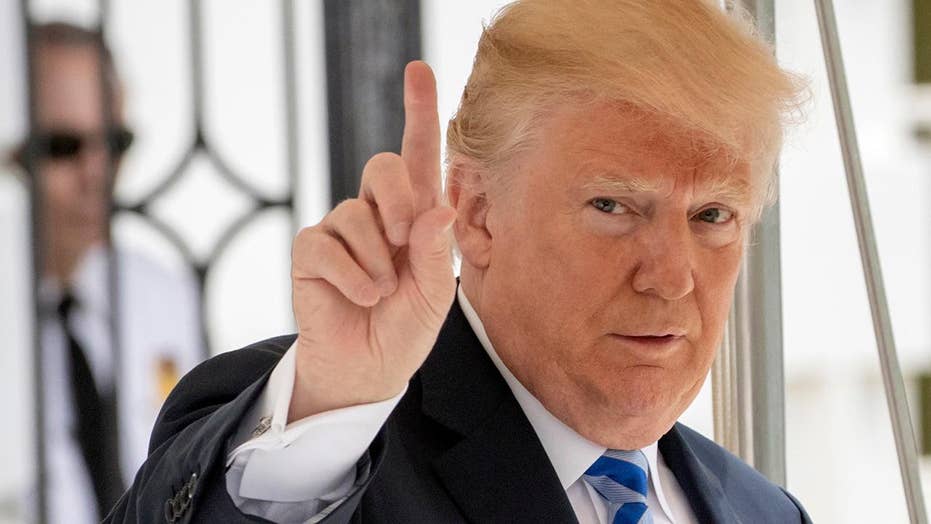 Trump lashes out at 'conflicts of interest' in Mueller probe

More than a dozen members of the special counsel's team have donated almost exclusively to Democratic candidates, according to Federal Election Commission records; Kevin Corke reports.

President Trump on Saturday questioned whether Special Counsel Robert Mueller or the Justice Department was “leaking” letters from his legal team to the “Fake News Media,” again insisting there is “No Collusion” in the Russia “Witch Hunt Hoax.”

“There was No Collusion with Russia (except by the Democrats). When will this very expensive Witch Hunt Hoax ever end?  So bad for our Country. Is the Special Counsel/Justice Department leaking my lawyers letters to the Fake News Media?  Should be looking at Dems corruption instead?” Trump tweeted Saturday.

The president was referring to a letter obtained and published by The New York Times on Saturday dated January 29, 2018 from former Trump attorney John Dowd and Trump attorney Jay Sekulow to Mueller regarding a potential interview with the president.

"In order to facilitate a fair process, as a practical solution, without waiver of the President’s constitutional and statutory privileges or objections, and in exchange for a rapid conclusion, we are willing to receive any further questions and provide you the answers to help you complete your report and resolve any other remaining questions you might have," the letter, now obtained by Fox News, read. "We are prepared to meet to discuss a final list of questions that you need to be answered so that the Nation may move forward, and so that we may preserve the dignity of the Office of the President of the United States."

The president’s tweet comes days after the special counsel’s office released its second statement of expenditures for the investigation into Russian meddling and potential collusion with Trump campaign associates during the 2016 presidential election.

Taxpayers have spent nearly $17 million on the Russia probe since it began in May 2017, according to the new spending report released Thursday.

Approximately $10 million was spent between October 2017 and March 2018. That includes $4.5 million spent by Mueller’s team and another $5.5 million spent by the Justice Department on other expenditures attributable to the investigation.

“The department will continue to dedicate and leverage resources to maintain strong program and financial management controls,” the DOJ said in the report. “Management takes its program and financial accountability seriously and is dedicated to ensuring that funds are used in a responsible and transparent manner.”

The president has repeatedly pointed fingers at Democrats for alleged collusion during the 2016 election—specifically the Democratic National Committee and the Hillary Clinton campaign for their move to pay $9 million through law firm Perkins Coie to fund the now-infamous, and unverified, anti-Trump dossier.

The president has also blasted the special counsel team, referring to investigators as “Angry Democrats.” 13 of the 17 investigators on Mueller’s team are registered Democrats, while at least nine have donated to Democratic candidates and causes. Mueller, though, is said to be a lifelong Republican.

Revelations of an FBI informant communicating with members of the Trump campaign — George Papadopoulos, Sam Clovis, and Carter Page — have set of new criticism from Trump for several ex-intelligence and law enforcement figures from the Obama administration.

The Justice Department’s inspector general, Michael Horowitz, is now investigating any alleged “impropriety or political motivation” in the FBI’s investigation into Russian interference and potential collusion with Trump campaign associates during the 2016 presidential election, following demands from Trump, who has dubbed the news of the informant as “SPYGATE.”

Trump’s lawyer, former New York City Mayor Rudy Giuliani, said this week that he had drawn “red lines” for Mueller in talks over a possible interview with the president.

Giuliani told Fox News Thursday that Mueller would have to meet two conditions for an interview to take place: provide access to the “spygate” files as well as the memo penned by Deputy Attorney General Rod Rosenstein outlining the scope of Mueller’s authority in the special counsel probe.

The president also tweeted on Saturday that the U.S. must be treated “fairly” in trade.

“The United States must, at long last, be treated fairly on Trade. If we charge a country ZERO to sell their goods, and they charge us 25, 50 or even 100 percent to sell ours, it is UNFAIR and can no longer be tolerated. That is not Free or Fair Trade, it is Stupid Trade!” Trump tweeted.