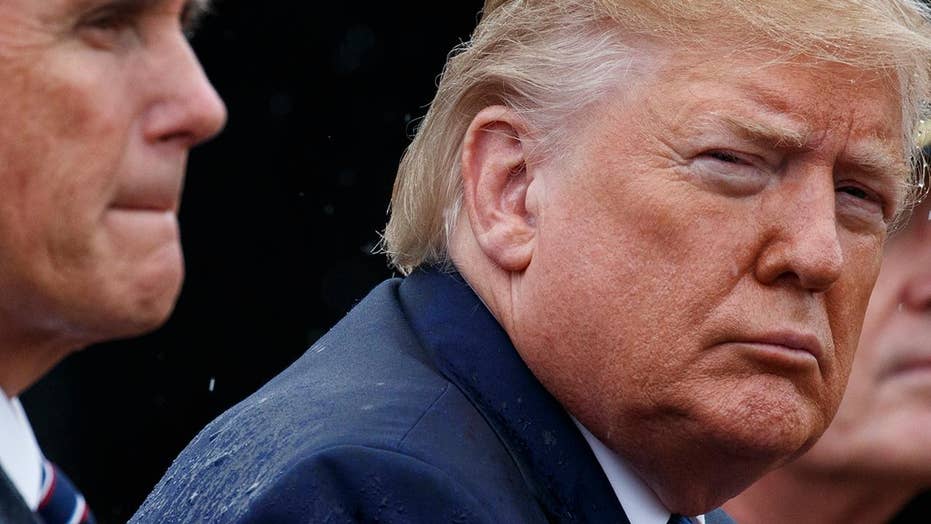 President Trump on Tuesday renewed calls to learn more about the Ukraine whistleblower’s identity, suggesting he should be allowed to “interview & learn everything about” the individual whose complaint sparked a formal impeachment inquiry in the House.

“So if the so-called ‘Whistleblower’ has all second hand information, and almost everything he has said about my ‘perfect’ call with the Ukrainian President is wrong (much to the embarrassment of Pelosi & Schiff), why aren’t we entitled to interview & learn everything about the Whistleblower, and also the person who gave all of the false information to him,” Trump tweeted Tuesday.

“This is simply about a phone conversation that could not have been nicer, warmer, or better,” he continued. “No pressure at all (as confirmed by Ukrainian Pres.). It is just another Democrat Hoax!”

The president has said in recent days that the White House was “trying to find out” the identity of the whistleblower, while the whistleblower’s attorneys have said they are concerned about their client’s safety.

The president’s tweets come amid the political chaos surrounding the whistleblower’s complaint, which was filed in August to the intelligence community inspector general, Michael Atkinson.

The complaint alleged that during a July phone call with Ukrainian President Volodymyr Zelensky, Trump pressured him to launch an investigation into former Vice President Joe Biden and his son Hunter regarding business dealings in Ukraine. The whistleblower alleged that Trump was soliciting foreign assistance in the 2020 presidential election.

Joe Biden has acknowledged on camera that, when he was vice president, he successfully pressured Ukraine to fire the prosecutor, Viktor Shokin, who was investigating the natural gas firm Burisma Holdings — where Biden's son Hunter had a highly lucrative role on the board. Biden's allies say his intervention was driven by corruption concerns.

The White House last week released a transcript of the call, which confirmed the allegation that Trump did, in fact, seek an investigation — though Republicans and Democrats disagree on whether his comments constituted improper pressure.

The House Intelligence Committee then released the declassified whistleblower complaint, which acknowledges that much of the allegations were based on second-hand information and cited “multiple White House officials with direct knowledge of the call.” The intelligence community inspector general now, though, says that the whistleblower did claim firsthand knowledge of the incident, in addition to other information from sources.

But the president’s tweets highlight inconsistencies in the complaint. Republicans specifically have questioned why the whistleblower’s sources in the White House didn’t file a complaint themselves.

“When I think of whistleblower complaints, I generally think of someone with firsthand knowledge of the events in question,” Sen. Lindsey Graham, R-S.C., who has been an ally of the president, said.

The complaint also stated that Trump made a “specific request that the Ukrainian leader locate and turn over servers used by the Democratic National Committee (DNC) and examined by the U.S. cybersecurity firm CrowdStrike" — a request that does not appear in the declassified transcript of the call released by the Trump administration. Trump mentioned CrowdStrike, but did not demand the server.

Acting Director of National Intelligence Joseph Maguire, in tense testimony Thursday on Capitol Hill, defended his handling of the whistleblower complaint, while calling the matter "unprecedented."

Maguire also stressed that the complaint essentially was "hearsay," not "corroborated by other folks."