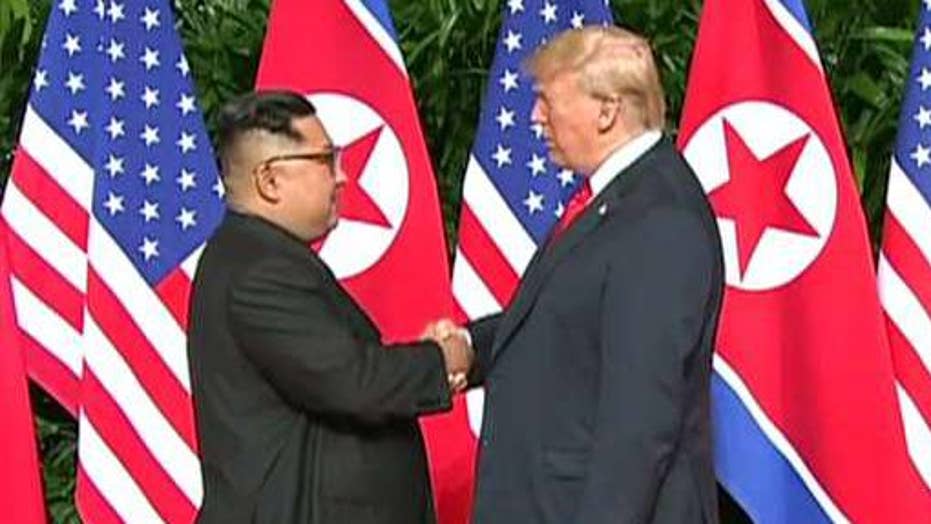 President Trump: We will have a terrific relationship

President Trump and North Korean leader Kim Jong Un on Tuesday emerged from their "working lunch" and indicated that they were about to sign something, but did not give any further details.

"We had a really fantastic meeting, a lot of progress, really very positive," Trump said "I think better than anybody could have expected. Top of the line, really good. We’re going right now to a signing.”

Trump did not go into details about the comment.

Trump shook hands with North Korean leader Kim in Singapore shortly after 9 a.m. local time Tuesday, kicking off a historic summit meeting and marking a new era in relations between the U.S. and the totalitarian state known as the Hermit Kingdom.

Moments later, as Trump and Kim sat side-by-side, the American president told a group of reporters: "We will have a terrific relationship, I have no doubt." Kim said through an interpreter that it "was not easy to get here" and that there "were obstacles, but we overcame them to be here."

About 40 minutes later, the two leaders emerged from one-on-one talks accompanied by their interpreters and made a brief appearance on a balcony. When asked how talks were progressing, Trump said: "Very good. Very, very good. Excellent relationship, thank you."

Moments later, Trump and Kim were joined by their aides for expanded discussions and a working lunch. On the U.S. side, Trump was accompanied by Secretary of State Mike Pompeo, White House Chief of Staff John Kelly and National Security Adviser John Bolton.

"Mr. Chairman, it’s a great honor to be with you," Trump told Kim as their aides faced each other across a rectangular table, "and we’ll have tremendous success together and we’ll solve a big problem, a big dilemma that until this point has been unable to be solved. I know that working together, we will get it taken care of." He then shook hands with Kim for at least the fourth time in under an hour.

Trump arrived first at the summit site on Singapore's Sentosa Island. Kim's black armored limousine pulled in a short time later at the luxury resort for the world's first meeting between a sitting U.S. president and a North Korean leader. The two clasped hands as they posed for photos in front of a row of U.S. and North Korean flags. Trump then directed Kim to walk down a hallway, where they briefly spoke.

Despite the anticipation and early promise surrounding the talks, it was unclear how much could be accomplished after the White House unexpectedly announced Trump would depart Singapore by Tuesday evening. The White House said Trump was leaving early because negotiations had moved "more quickly than expected," but gave no details about any possible progress in preliminary talks.

In the run-up to the talks, Trump had hopefully predicted the two men might strike a nuclear deal or forge a formal end to the Korean War in the course of a single meeting or over several days. But in a briefing with reporters Monday, Pompeo sought to keep expectations for the summit in check.

"We are hopeful this summit will help set the conditions for future productive talks," the secretary of state said.

Hours before the summit, Trump tweeted with cautious optimism: "Meetings between staffs and representatives are going well and quickly ... but in the end, that doesn't matter. We will all know soon whether or not a real deal, unlike those of the past, can happen!"

In a second tweet, Trump defended his decision to meet with Kim from critics – whom he referred to as "haters and losers."

"We have our hostages, testing, research and all missle [sic] launches have stoped [sic], and these pundits, who have called me wrong from the beginning, have nothing else they can say! We will be fine!”

It was a striking about-face from less than a year ago, when Trump was threatening "fire and fury" against Kim, who in turn scorned the American president as a "mentally deranged U.S. dotard."

Trump arrived in Singapore fresh from a contentious G7 summit in Quebec, which saw him clash with Canadian Prime Minister Justin Trudeau over trade and tariffs. Trump advisers cast his actions as a show of strength before the Kim meeting.

Alluding to the North's concerns that giving up its nuclear weapons could surrender its primary deterrent to forced regime change, Pompeo told reporters that the U.S. was prepared to take action to provide North Korea with "sufficient certainty" that denuclearization "is not something that ends badly for them."

He would not say whether that included the possibility of withdrawing U.S. troops from the Korean Peninsula, but said the context of the discussions was "radically different than ever before."

"I can only say this," Pompeo said. "We are prepared to take what will be security assurances that are different, unique, than America's been willing to provide previously."

The North has faced crippling diplomatic and economic sanctions as it has advanced development of its nuclear and ballistic missile programs. Pompeo held firm to Trump's position that sanctions will remain in place until North Korea denuclearizes -- and said they would even increase if diplomatic discussions did not progress positively.

Experts believe the North is close to being able to target the entire U.S. mainland with its nuclear-armed missiles, and while there's deep skepticism that Kim will quickly give up those hard-won nukes, there's also some hope that diplomacy can replace the animosity between the U.S. and the North.