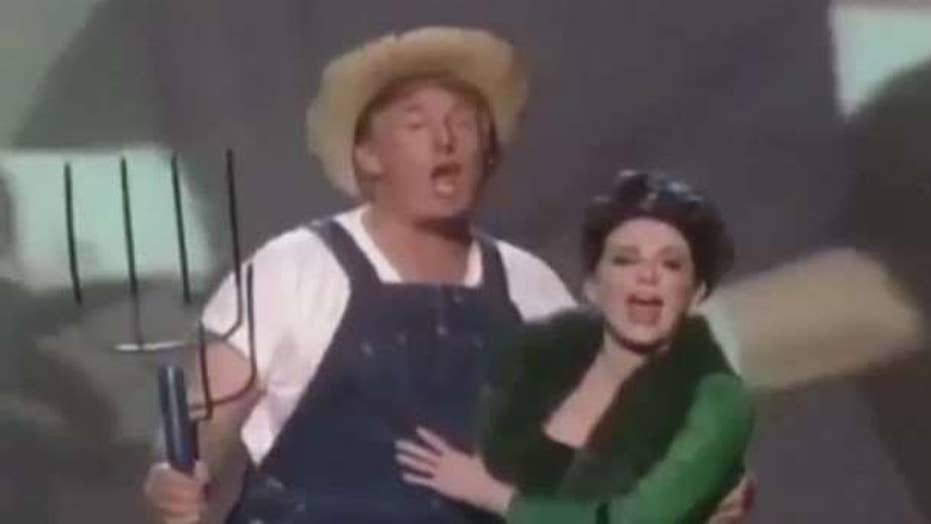 Minutes before President Trump was scheduled to sign a farm bill that will legalize hemp production and fund food assistance programs, he posted a throwback video of himself performing the "Green Acres" theme song at the Emmys years back.

"Green Acres is the place to be," Trump sang on stage at the 2005 Emmy Awards donning farm attire, alongside actor Megan Mullally. The two performed the song together as Trump danced slightly to the music from the show, which aired from 1965 until 1971.

The performance was part of host Ellen DeGeneres' "Emmy Idol" competition within the awards show, according to AOL.com. Celebs competed for the "Idol" award, a play on the hit singing show "American Idol."

Mullally tweeted "omg" in response to the president's tweet, and added: "if you guys need me, i'll be in a hole in the ground."

Before he signed the bill Thursday, Trump told reporters: "That was from the Emmys. I sang 'Green Acres' and received a very nice award that night. That was really great."

The "Agricultural Improvement Act 2018," which has been approved by Congress, legalizes the industrial production of hemp, which is part of the cannabis plant. Industrial hemp will be removed from the federal list of controlled substances.

The bill — which will cost roughly $400 billion over five years or $867 billion over 10 years — also includes funding for farmers and will fund food programs for low-income families.