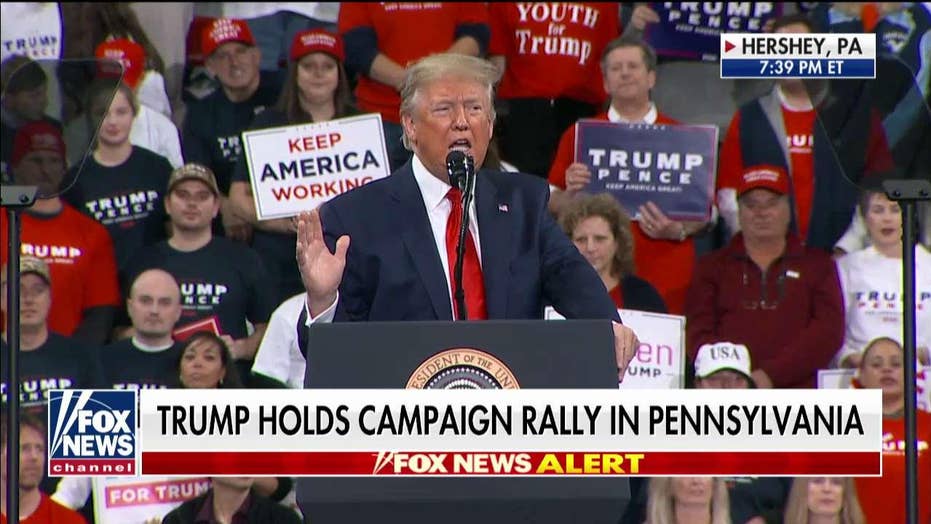 Trump at rally: 'They spied on our campaign, OK?'

President Trump headlined a rally in the key swing state of Pennsylvania on a momentous day in his presidency Tuesday, after House Democrats unveiled two articles of impeachment against him, even as they also handed him a breakthrough political victory by finally approving his new trade deal to replace the North American Free Trade Agreement (NAFTA).

ALL EYES ON DURHAM'S CRIMINAL PROBE AFTER HE REBUKES DOJ FINDINGS

House Intelligence Committee Chairman Rep. Adam Schiff, D-Calif., is a totally "crooked bastard" for his handling of the impeachment probe and Russia inquiry, Trump said. Schiff had suggested for years that he was privy to evidence that Trump's campaign had illegally conspired with Russians, and recently apologized for falsely stating that his panel had no advance contact with the purported whistleblower at the center of the impeachment inquiry. 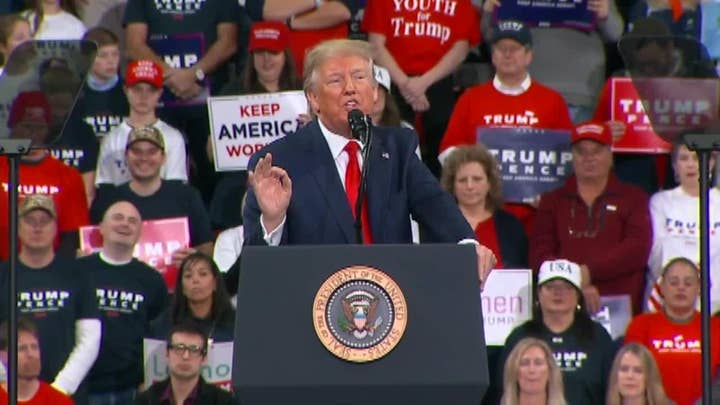 Trump then listed some of his achievements while in office, ticking off the killing of Islamic State leader Abu Bakr al-Baghdadi, a deal to create the Space Force and a strong economy.

Echoing a line he's used often, Trump said, “This country is so respected, and we were not respected four years ago. We were laughed at."

Trump asserted that Justice Department Inspector General Michael E. Horowitz had identified "outrageous, scandalous and unprecedented abuses of power." He said the FBI had "destroyed the lives of people that are great people" and called them "scum." Horowitz, in his report, found that contrary to numerous claims by dozens of prominent media analysts, the FBI had in fact extensively relied on a discredited dossier funded by the Hillary Clinton campaign to surveil a former Trump aide in 2016 and 2017.

Horowitz also identified numerous lapses at all levels of the FBI, including agents' failure to independently verify the dossier's claims before presenting them to a secret surveillance court. At the rally, Trump said he was looking forward to a report coming from John Durham, the prosecutor whom Attorney General William Barr selected to investigate how intelligence was gathered in the Russia probe.

Durham said he disagreed with some of Horowitz's findings, including Horowitz's conclusion that the FBI's investigation into the Trump campaign was properly predicated, despite its faults. Durham's criminal review is broader than Horowitz's and has significantly more legal resources at its disposal.

Trump added that not many leaders could withstand what he's been through: “A regular president would be under the table, thumb in mouth, saying, 'Take me home, Mommy. This is enough for me.'”

Tuesday night's rally gave Trump an opportunity to deliver his response to thousands of die-hard supporters in person. He spent much of the day blasting Democrats on Twitter, saying that impeaching a president "who has done NOTHING wrong, is sheer Political Madness!"

Before leaving the White House, Trump previewed his rally speech, saying Democrats were "embarrassed" by the introduction of articles of impeachment against him. In the evening, he argued again that's why Democrats finally announced earlier Tuesday they supported USMCA, the modernization of NAFTA that the president made the top legislative priority of the year.

"They were very embarrassed by it," Trump claimed to reporters. "That's why they brought up USMCA an hour after."

"They wanted to muffle down impeachment," Trump added. He then tweeted that he was on his way to Hershey in south-central Pennsylvania, adding, "I love Hershey chocolate!" At the outset of the rally, Trump emphasized again that he quite likes Hershey chocolate.

The event took place in a Republican-leaning congressional district, and thousands lined up for seats, with hundreds gathering more than 10 hours early. Former state Sen. Scott Wagner reportedly offered to pay up to $20,000 in security costs for the event on behalf of the local government.

Trump eked out a 2016 win in Pennsylvania by piling up support with rural and working-class white voters. He'd need to hold that support to counter any energy from Democrats in the suburbs of Philadelphia.

Congressional passage of USMCA "will be a significant win for farmers, workers and all Americans," said Sen. Chuck Grassley, the Iowa Republican chairing the chamber's Finance Committee. "Renegotiating NAFTA was a central campaign promise made by President Trump. He kept his word and Americans will enjoy the many benefits of this upgraded trade deal as a result."

Approving the agreement gave House Democrats, particularly those from more conservative districts, a useful talking point when they head home for the holidays. Many had been reluctant to face voters with few legislative achievements beyond impeaching the president, and Pelosi emphasized the deal's importance to American workers.

USMCA "will be the best and most important trade deal ever made by the USA," President Trump tweeted earlier Tuesday. Vice President Mike Pence said the Democrats' move was a victory for Trump's policy and showed Pelosi and her caucus acquiescing "to the voice of the American people."

President Trump walking from the Oval Office as he headed to speak with reporters on the South Lawn of the White House before departing for the Pennsylvania rally Tuesday. (AP Photo/ Evan Vucci)

"More than 12 million American jobs depend on our $1.4 trillion trading relationship with Canada and Mexico, and USMCA will strengthen this trade relationship," said Tom Linebarger, the CEO of engine-maker Cummins Inc. and chairman of the Business Roundtable's trade and international committee. The Roundtable has represented the CEOs of the 200 largest U.S. companies.