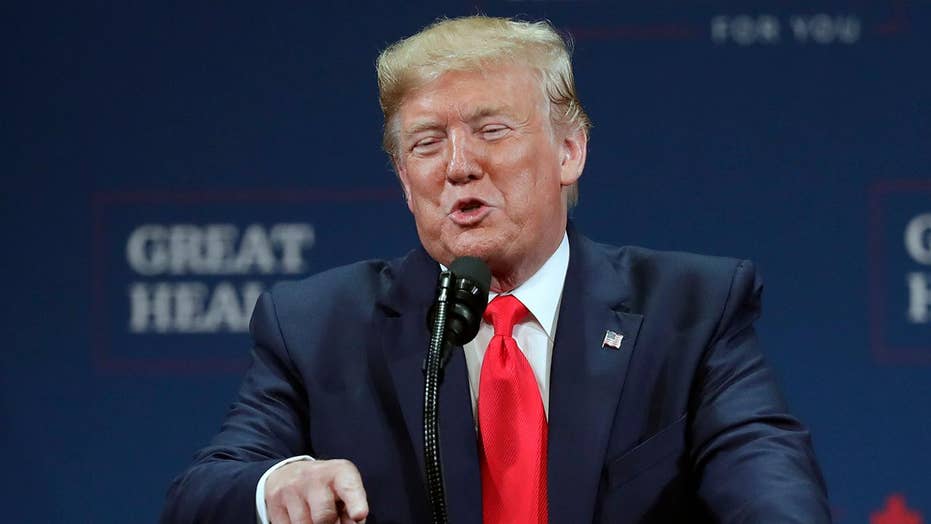 Trump wants China to investigate Hunter Biden's time on a corporate advisory board and whether he profited from then-Vice President Joe Biden; Rich Edson reports from the White House.

The White House will send House Speaker Nancy Pelosi, D-Calif., a letter as early as Friday "daring" her to hold a vote on Democrats' impeachment inquiry into President Trump, Fox News has confirmed.

The letter will say the White House won't comply with the Democrats' investigation because Pelosi hasn't codified the probe with a formal vote on the House floor. Its tone will be consistent with that of the letter House Minority Leader Kevin McCarthy, R-Calif., sent to the speaker on Thursday, Fox learned.

In his letter, McCarthy called on Pelosi to end the impeachment inquiry until “equitable rules and procedures” are set up.

“Unfortunately, you have given no clear indication as to how your impeachment inquiry will proceed -- including whether key historical precedents or basic standards of due process will be observed,” McCarthy wrote. “In addition, the swiftness and recklessness with which you have proceeded [have] already resulted in committee chairs attempting to limit minority participation in scheduled interviews, calling into question the integrity of such an inquiry.”

Pelosi shot back at McCarthy, saying that "existing rules of the House provide House committees with full authority to conduct investigations for all matters under their jurisdiction."

She later tweeted: "The fact that the [House Republicans'] loyalty is to Trump and not to the Constitution is not going to slow down or impair our ability to keep the republic of our founders envisioned."

The letter prompted a response from President Trump, who tweeted Thursday: "Leader McCarthy, we look forward to you soon becoming Speaker of the House. The Do Nothing Dems don’t have a chance!"

House Democrats launched an impeachment inquiry into Trump after a whistleblower complaint suggested the president took part in a quid pro quo scheme during a July 25 phone call with his Ukrainian counterpart, using $400 million in military aid as leverage to induce officials there to investigate Democratic presidential hopeful Joe Biden, his son Hunter and their business dealings in that country.

Trump has said his call with President Volodymyr Zelensky was "perfect." On Thursday, he repeated his contention that the Democrats' investigation "the greatest witch hunt in the history of our country."

Trump said there "wasn't anything said wrong" in his phone call with Zelensky and called the impeachment probe a "Democrat scam."

He later tweeted that, as president, he has an "absolute right, perhaps even a duty, to investigate or have investigated corruption, and that would include asking or suggesting other countries to help us out!"

Schiff made a formal request on Sept. 10 to transmit the whistleblower complaint to Congress. Trump has said Schiff is a "lowlife" who should resign.

Biden took a pointed jab at President Trump on Thursday night amid the back-and-forth over the impeachment inquiry, tweeting, "The idea of Donald Trump attacking anyone’s integrity is a joke."

A senior Democratic aide told Fox News on Thursday, "As we continue to follow the facts, it would behoove the president to come up with something more persuasive than Kevin McCarthy’s pathetic and bogus process arguments," following reports of the White House's letter to Pelosi, first reported by Axios.

“Given that the president just this morning on national television urged yet another foreign government to meddle in our upcoming 2020 elections, we would think the White House would want to mount a rigorous defense of the president’s clear betrayal of his oath of office," the aide said.