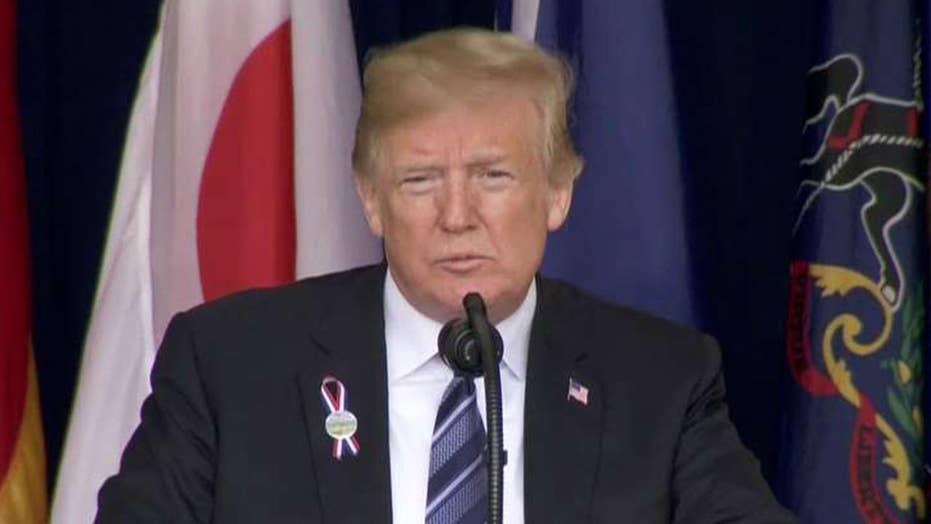 Trump on 9/11: America will never ever submit to tyranny

President Trump, at a hushed ceremony in Shanksville, Pa., paid “solemn tribute” to the 40 passengers and crew members of Flight 93 who “stood up and defied the enemy” 17 years ago.

The president and first lady Melania Trump visited the hallowed site Tuesday to commemorate the 17th anniversary of the 9/11 attacks. They spoke after a new memorial to the victims was dedicated over the weekend.

“On September 11, 2001, a band of brave patriots turned the tide on our nation’s enemies and joined the immortal ranks of American heroes,” the president said. “At this memorial, on this sacred earth, in the field beyond this wall, and in the skies above our heads, we remember the moment when America fought back.”

The 40 passengers and crew members of Flight 93 are believed to have prevented a larger attack by fighting back against the terrorists who hijacked the plane. The field in Shanksville, Pa. where the plane crashed, is just a 20-minute flight from the U.S. Capitol.

Trump, in a passionate address, honored the lives lost and their families, saying that their “tears are not shed alone, for they are shared grief with an entire nation.”

“We honor their sacrifice by pledging to never flinch in the face of evil and to do whatever it takes to keep America safe,” Trump said.

The president recalled the story of that day—passengers and crewmembers placing “their final calls home, whispering those eternal words, ‘I love you.’”

“They bravely charged the cockpit. They attacked the enemy. They fought until the very end. And they stopped the forces of terror and defeated this wicked, horrible, evil plan,” Trump said. “Through their sacrifice, the 40 saved the lives of countless Americans and they saved our Capitol from a devastating strike.”

Trump called the field a “monument to American defiance,” with the new memorial sharing a “message to the world—America will never submit to tyranny.”

“As commander in chief, I will always do everything in my power to prevent terrorists from striking American soil,” Trump said. “17 years ago, 40 incredible men and women showed the whole world that no force on earth will ever conquer the American spirit …We treasure their memory and legacy.”

The new Shanksville memorial is called "The Tower of Voices," which stands 93 feet tall. The tower holds 40 wind chimes to honor the 40 victims of Flight 93.

"The Tower of Voices" monument honors the fallen 40 passengers and crew of Flight 93. (AP)

Vice President Pence, who visited Shanksville last year, on Tuesday presided over a ceremony at the Pentagon, delivering a tearful address and acknowledging that approximately one quarter of the U.S. population was born after the 9/11 attacks 17 years ago.

"We gather here today to reflect on what we remember, to remember the fallen, their families and the heroes that day. But be assured, we also gather here to ensure that each succeeding generation knows the story of what happened that dark day, and understands why," Pence said. "We must learn the lessons of September 11, and remain ever vigilant in the defense of our nation and our people."

The vice president added that the terrorists who carried out the attacks "sought not just to take the lives of our people and crumble our buildings, but they hoped to take our spirit."

Pence touted the administration's efforts to strengthen the military, offering "renewed support" to the armed forces. "We overcome every challenge, we triumph over every evil, and we remain united as one nation, under God," Pence said, concluding with a delivery of the Irish Prayer.

Trump on Tuesday also signed a proclamation designating Sept. 11, 2018 “Patriot Day 2018” in honor of the victims from the tragic terror attacks nearly two decades ago, and "every hero who has given their life since that day to protect our safety."

The proclamation, which was signed on the 17th anniversary of the 9/11 attacks, honors “the memories of the souls we lost,” and pays “tribute to all of the patriots who have sacrificed their lives in defense of freedom.”

“On Patriot Day, we honor the memories of the nearly 3,000 precious lives we lost on September 11, 2001, and every hero who has given their life since that day to protect our safety and our freedom,” the proclamation says. “We come together, today, to recall this timeless truth: When America is united, no force on Earth can break us apart. Our values endure; our people thrive; our Nation prevails; and the memory of our loved ones never fades.”

The statement details how “that fateful Tuesday ... erupted into horror and anguish when radical Islamist terrorists carried out an unprecedented attack on hour homeland.”

“Through the dust and ashes, we emerged resilient and united—bruised but not broken,” the statement says.

"17 yrs ago, we received a terrible reminder of the evil in our world. In the midst of horrific tragedy America stood strong. We will never be the same, but we will always resilient. Today we honor the memory of those who died, and those who keep us safe. #NeverForget"