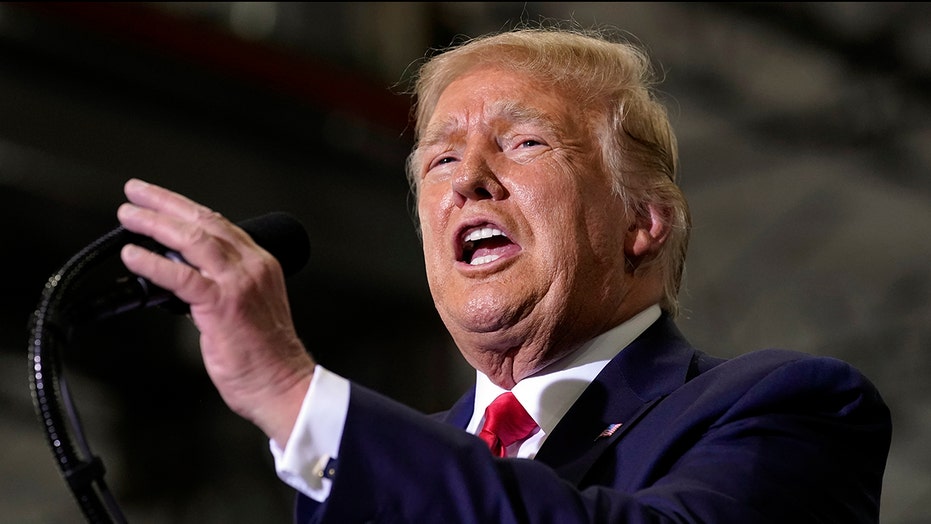 President Trump said his nominee to replace Justice Ruth Bader Ginsburg would be a woman.

"It will be a woman. A very talented, very brilliant woman." Trump said. "I think it should be a woman. I actually like women much more than I like men."

The commander-in-chief opened his rally in Fayetteville, N.C., by paying tribute to the late justice, saying "you may disagree with her, but she was a tremendous inspiration to a number of people, I say all Americans."

Trump told reporters before boarding Air Force One to North Carolina that his pick would likely be announced next week.

Trump said the current situation is different than in February 2016 when a seat was vacated by late Justice Antonin Scalia. “That’s called the consequences of losing an election,” the president said.

He noted her close relationship with late Justice Antonin Scalia, which he called a "powerful reminder we can disagree on fundamental issues while treating each other with decency and respect."

Trump also asserted his right to nominate a new justice before the election. "Article II of the Constitution says the president shall nominate justices of the Supreme Court. I don't think it can be any more clear, can it?"

A chant broke out among the crowd multiple times throughout the night: "Fill that seat, fill that seat."

"It says the president, we're supposed to fill the seat. That's what we're going to do."

Trump also told the crowd he would now consider his rallies protests. "This isn't a rally. From now on it's called a protest," he said. "Protest against stupidity."

Trump said that a Supreme Court seat was vacated during an election year or prior to inauguration 29 times throughout history. "Every sitting president made a nomination," he said.

President Obama nominated Merrick Garland for the seat, but Senate Majority Leader Mitch McConnell, R-Ky., in 2016 used his caucus’ numbers to hold the seat open until after the election.

Of Sen. Susan Collins’ statement that the nominee should be voted on after the election, Trump said before the rally, “I totally disagree.” “We have an obligation, we won,” he said. “We're here now. Right now we're here and we have an obligation to the voters.”

When addressing the crowd he brought up Collins again. "Nobody ever said 'oh, let's not fill the seat. I won't say it. Susan, I won't say it... Susan."

Trump turned to his opponent Joe Biden. He said that Democrats were "trying to delay" coronavirus vaccine approval to "give sleepy Joe the credit."

"If we had listened to Joe Biden [on coronavirus] hundreds of thousands more Americans would have died," he said.

Earlier on Saturday, Trump said Republicans should fill the vacancy on the Supreme Court left by Justice Ruth Bader Ginsburg "without delay."

The president’s statement comes after Senate Majority Leader Mitch McConnell, R-Ky., just hours after Ginsburg’s passing, vowed that a Trump nominee to the Supreme Court “will receive a vote on the floor of the United States Senate.”

McConnell added that, “by contrast, Americans reelected our majority in 2016 and expanded it in 2018 because we pledged to work with President Trump and support his agenda, particularly his outstanding appointments to the federal judiciary.”