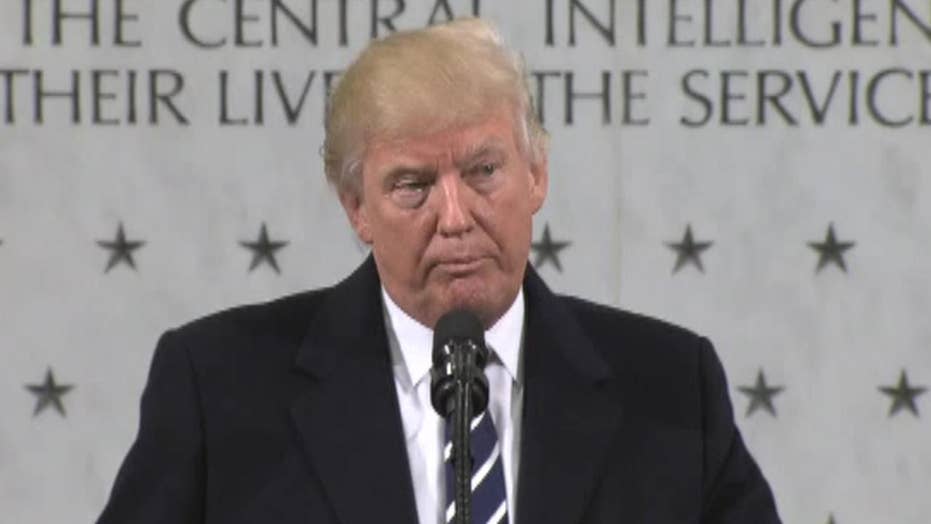 President Trump to CIA: I am so behind you

The president speaks at CIA headquarters

President Trump visited the CIA on Saturday in a conciliatory bid to end a feud with the intelligence community -- a dispute he suggested was overblown by the media -- while making clear one of his top priorities will be to destroy Islamic State terror groups.

“We have to get rid of ISIS. We have no choice. Radical Islamic terrorism, it has to be eradicated,” said Trump, on his first full day in the White House and his first official agency stop of his presidency.

Trump's decision to travel to CIA headquarters so quickly after taking office was seen as an attempt at a fresh start with the intelligence agencies he will now rely on for guidance as he makes weighty national security decisions. Following his private meeting with top CIA leaders, Trump said the U.S. had been "restrained" in its efforts to combat terrorism, calling the threat "a level of evil we haven't seen."

Trump’s trip across the Potomac River to the agency’s headquarters in northern Virginia follows a tumultuous past couple of months in which the U.S. intelligence community has suggested Russia's alleged interference in the 2016 campaign was meant to help Trump beat the Democratic nominee Hillary Clinton.

The CIA, FBI and other agencies in the so-called U.S. intelligence community recently issued a report that stated Putin and Russia meddled in the race, though it found no evidence of vote tampering.

However, Trump last week suggested outgoing CIA Director John Brennan may have leaked an unofficial dossier on him containing embarrassing and highly suspect allegations, and compared the situation to living in “Nazi Germany.”

John Brennan has denied such accusations and said Trump lacks “a full understanding” of Russian capabilities and the actions the country is taking in the world.

“Nobody feels stronger about the intelligence community than Donald Trump,” the president said Saturday. “I love you. I respect you. There’s nobody whom I respect more. We are going to start winning again."

Trump suggested that the news media, which he has repeatedly argued are dishonest and have treated him unfairly, overplayed his concerns about intelligence officials. He also accused the media of mischaracterizing the size of his inauguration crowds.

"He will need to do more than use the agency memorial as a backdrop if he wants to earn the respect of the men and women who provide the best intelligence in the world,' Schiff said.

“We are going to do great things,” said Trump, who also tried to reassure the roughly 400 agency employees who assembled at the headquarters that his pick to run the agency now, Kansas Rep. Mike Pompeo, would advance the CIA and its mission as the country’s top spy agency.

Before joining Congress, Pompeo was first in his class at the U.S. Military Academy at West Point, served in the Army and graduated from Harvard Law School.

“Everything he’s done is a home run,” Trump said. “People like him. People respect him. You are going to be getting a total star."

Trump said during his winning campaign that President Obama didn’t do enough to destroy ISIS, the upstart terror group that emerged in the chaos of the Middle East and has since claimed responsibility for dozens of terror attacks over the past several years that have killed hundreds.

Trump had begun his first full day in the White House by attending the traditional, post-inauguration National Prayer Service.

The roughly one-hour, interfaith service at the Washington National Cathedral included the National Anthem and a Muslim prayer.

“Hold fast that which is good,” said Bishop Mariann Budde, of the Episcopal Diocese of Washington. “Make no peace with oppression. Strengthen the weak. … Honor all people."

Trump posted on Facebook on Saturday night saying, “‪Thank you for the prayers and continued blessings upon our country during the National Prayer Service this morning.“