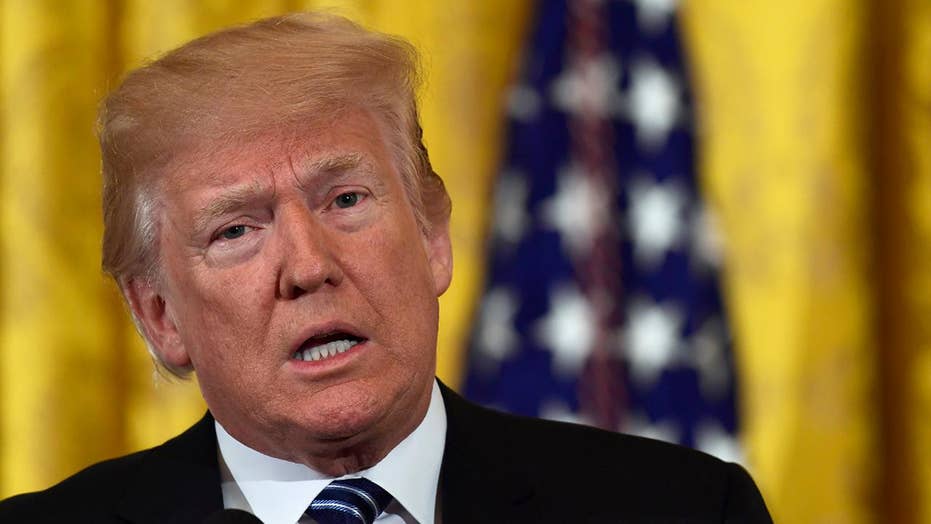 President Trump on Monday met with Deputy Attorney General Rod Rosenstein and FBI Director Christopher Wray, a day after demanding a DOJ investigation into whether the FBI “infiltrated” his 2016 campaign.

Sanders said it was also agreed to that White House Chief of Staff John Kelly will “immediately set up a meeting with the FBI, DOJ, and DNI together with congressional leaders to review highly classified and other information they have requested.”

The president made the investigation demand on Sunday, following reports detailing how an FBI “informant” had multiple contacts with members of Trump’s campaign. Trump said he would formally seek a DOJ probe of whether agents surveilled the campaign for political purposes, and whether any such demands came from the Obama administration.

Within hours, the DOJ had asked the department’s inspector general to handle such a review.

And, Rosenstein said in a Sunday statement: “If anyone did infiltrate or surveil participants in a presidential campaign for inappropriate purposes, we need to know about it and take appropriate action.”

“The White House plan to arrange a meeting where ‘highly classified and other information’ will be shared with members of Congress is highly irregular and inappropriate. The president and his staff should not be involved in the viewing or dissemination of sensitive investigatory information involving any open investigation, let alone one about his own activities and campaign,” Senate Minority Leader Chuck Schumer, D-N.Y., responded. “However, if such a meeting occurs, it must be bipartisan in order to serve as a check on the disturbing tendency of the president’s allies to distort facts and undermine the investigation and the people conducting it.”

The focus of Monday’s meeting was expected to be the Justice Department’s response to congressional requests – something that directly relates to the president’s weekend tweets, as GOP lawmakers have been locked in a heated dispute with DOJ over access to information about the apparent informant.

Congressional Republicans have been seeking documents relating to the confidential informant who helped investigate potential Russian collusion by the Trump campaign, but the Justice Department has opposed the move citing the sensitivity of the matter.

Vice President Pence, in an interview Monday with Fox News’ Martha MacCallum, said Trump was “grateful” that the DOJ was having the inspector general “look into and determine and ensure that there was no surveillance done for political purposes against our campaign.”

He added, “I think it would be very troubling to millions of Americans if that took place, but we’re very confident that as the inspector general has been doing their work looking at the conduct of the FBI during that period that, by adding their focus to this, that we’ll get to the bottom of it, because the American people have a right to know.”