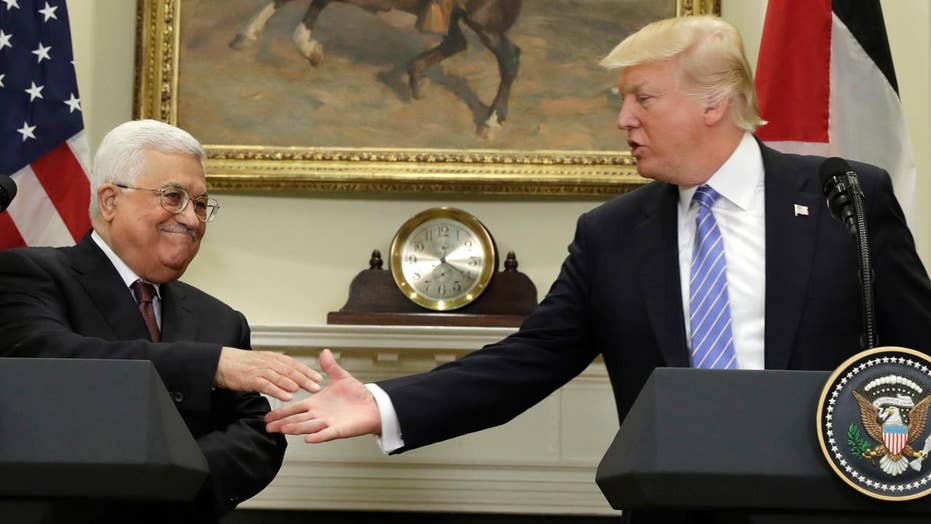 Trump: Israel, Palestine must work together on peace deal

President Trump met Wednesday with Palestinian leader Mahmoud Abbas at the White House, pressing him to do more to combat and condemn terrorism – while voicing confidence he can help mediate a lasting Middle East peace agreement.

That goal has eluded all the president’s modern predecessors, including Barack Obama, but Trump vowed Wednesday: “We will get it done.”

“I’m committed to working with Israel and the Palestinians to reach an agreement,” Trump said. “I will do whatever is necessary to facilitate the agreement.”

Acknowledging an Israeli-Palestinian accord is seen as the “toughest deal to make,” Trump told Abbas, “Perhaps we can prove them wrong” – before heading into a meeting with the Palestinian Authority president.

Abbas told Trump moments earlier, “Mr. President, with you we have hope.”

The peace process has been stalled since 2014 when former Secretary of State John Kerry's effort to lead the sides into peace talks collapsed. Since then, there have been no serious attempts to get negotiations restarted. The Obama administration spent its last months in office attempting to preserve conditions for an eventual resumption.

"We hope this will be a new beginning," Abbas told Palestinians at a meeting in Washington on the eve of the talks.

During remarks alongside Trump at the White House, Abbas – through a translator – stressed that his people want a Palestinian state with the capital of East Jerusalem and borders along the pre-1967 lines.

Israel rejects the 1967 lines as a possible border, saying it would impose grave security risks.

Trump stressed that there can be no lasting peace unless Palestinian leaders speak in a unified voice against “incitement … to violence and hate.”

He also was expected to press Abbas to end payments to families of Palestinians killed or held in Israeli jails, which critics decry as payments for terrorism. Republicans lawmakers have urged a halt to such payments.

While Abbas will be challenged on the payments, officials said Trump will reiterate his belief that Israeli settlement construction on land claimed by the Palestinians does not advance peace prospects.

In his Wednesday comments, Abbas also criticized ideas for a "one state" peace agreement, saying it could mean "racial discrimination" or an apartheid-like system.

In a February news conference with Israeli Prime Minister Benjamin Netanyahu, Trump broke with longtime U.S. policy by raising the one-state idea and withholding clear support for an independent Palestine, though officials quickly stressed he would support any arrangement agreed by the two sides.

Another contentious issue: Trump's campaign promise to move the U.S. Embassy in Israel from Tel Aviv to Jerusalem. The symbolic relocation would essentially recognize Jerusalem as Israel's capital. Abbas and other Arab leaders have said doing so would inflame already simmering tensions.

Since taking office, Trump has backed away from the pledge while saying he's still discussing it. On Tuesday, Vice President Mike Pence said the White House was giving "serious consideration" to the idea.