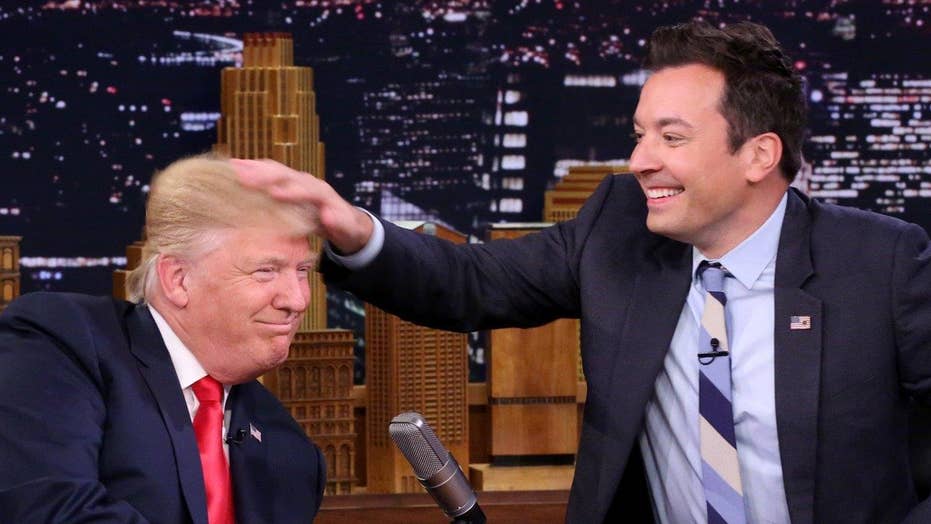 Donald Trump lets his hair down on 'Tonight Show'

Republican presidential candidate Donald Trump appeared on NBC’s “Tonight Show Starring Jimmy Fallon” on Thursday and joked that he is “looking to make a lot less money” in changing jobs to become president.

The billionaire real estate mogul engaged in relaxed banter with Fallon and even told the host the he can mess up his infamous slick-backed hair. Fallon also had asked Trump if he ever played the board game Sorry, but Trump said he was more of a Monopoly fan.

On a more serious note, Trump knocked on Fallon’s wooden desk when he was asked about getting sick. He praised his good fortune in staying healthy.

Trump also touched on his upcoming debate with Democratic nominee Hillary Clinton. He said he thinks the debate should forgo a moderator because he fears NBC’s Lester Holt would be tougher on him given the criticism Matt Lauer received after the first presidential forum.

Lauer's performance has been widely panned as easy on Trump and tough on Clinton.

At the end of the show, Fallon thanked Trump for providing comic fodder. The Republican nominee said he was "not trying to" say outrageous things.