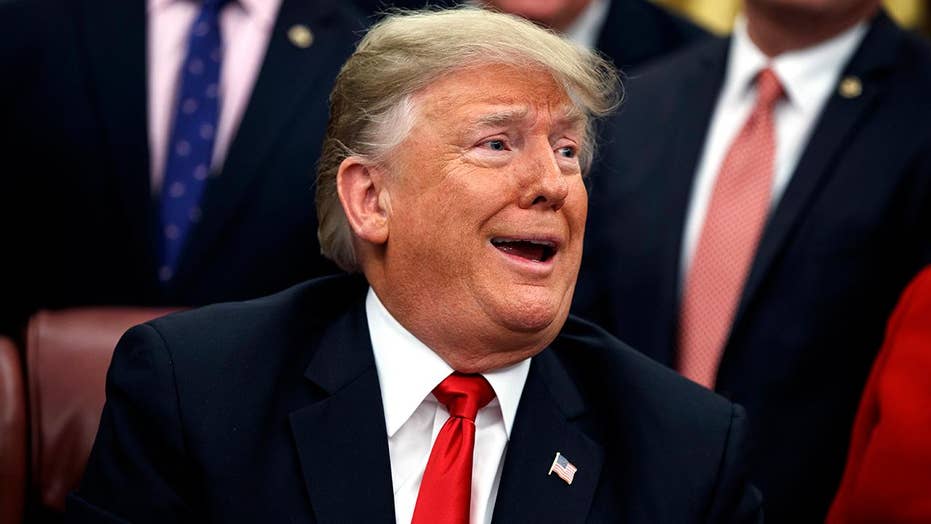 Just days after signing a sweeping criminal justice reform package and an $867 billion farm bill into law, President Trump on Sunday lamented the intense media focus on his decision to remove troops from what he called the "Never Ending Wars" in Syria and Afghanistan.

The bipartisan criminal justice reforms and the farm bill, which secured more funding for farmers hurt by the trade war with China and called for immediate "welfare reform," were largely overshadowed by the president's abrupt troop drawdown -- and Defense Secretary James Mattis' sudden resignation.

The White House announced last week it aimed to pull all 2,000 U.S. troops out of Syria and approximately 7,000 troops from Afghanistan -- roughly half of the U.S. soldiers stationed there.

Is withdrawing US troops from Syria an impeachable offense?

"We signed two pieces of major legislation this week, Criminal Justice Reform and the Farm Bill," Trump wrote. "These are two Big Deals, but all the Fake News Media wants to talk about is “the mistake” of bringing our young people back home from the Never Ending Wars. It all began 19 years ago!"

While President Obama repeatedly promised to pull all troops out of Afghanistan by 2014, U.S. and NATO forces remain there in a predominately training and advising role.

Afghanistan's security forces rely heavily on U.S. airpower against both Taliban and an upstart Islamic State affiliate. More than 2,400 American soldiers have died in Afghanistan since the 2001 U.S.-led invasion, and Trump announced in a video last week that troop deaths were on his mind in announcing the pullouts.

Mick Mulvaney goes inside border wall negotiations and a timeline for agreement, says the ball is in Democrats’ court

Mulvaney additionally commented that Mattis was not the right man for the job.

"Let’s be honest with each other," Mulvaney said. "I think the relationship between these two men [Trump and Mattis] had been fraying. I think the president no longer relied on Mattis to be able to deliver the president’s vision."

But Leon Panetta, who previously served as CIA Director, Secretary of Defense, White House Chief of Staff and OMB Director, later told Wallace on "Fox News Sunday" that the administration's move to withdraw from Syria -- apparently over Mattis' repeated and strenuous objections -- was irresponsible.

"I think the step to suddenly withdraw those troops from Syria has sent a terrible message to the world about where the United States stands," Panetta said.

He added: "If we’re sending a message to ISIS that somehow they can come back, they can be resilient, they can, at some point come back and attack us and have us vulnerable to another 9/11 attack -- that’s unacceptable."

Trump on Sunday also slammed outgoing Senate Foreign Relations Committee Chairman Bob Corker, R-Tenn., who has condemned Trump's pullouts as a hasty mistake that would allow ISIS to return from the brink. Corker argued that Trump's move was a worse decision than President Obama's pullout from Iraq, which analysts have said contributed to the rise of ISIS there.

Speaking on CNN's "State of the Union" on Sunday, Corker additionally derided the ongoing partial government shutdown amid White House demands for more border wall funding as a "purposefully contrived" dispute and a "made-up fight so the president can look like he is fighting."

Trump tweeted in part: "Bob Corker was responsible for giving us the horrible Iran Nuclear Deal, which I ended, yet he badmouths me for wanting to bring our young people safely back home. Bob wanted to run and asked for my endorsement. I said NO and the game was over. #MAGA I LOVE TENNESSEE!"