President Trump taunted Democrats at a major rally in Iowa Thursday night on the eve of key Senate impeachment action and just days before the nation’s first presidential caucuses there. "We're winning a lot, we're beating them all," he said.

Trump took the stage at Drake University in Des Moines for his fourth rally of the year, which may draw attention away from the Democrats seeking to unseat the president on Election Day, some of whom have been crisscrossing the state for weeks.

In addition, Senate Republicans are expected to have the deciding vote Friday on whether to bring an end to the impeachment trial or to extend it further by allowing witnesses.

Trump cited a "failing New York Times poll" which pitted him against "every one of the socialists," and had him leading against them all.

Biden, for his part, launched a full-frontal attack to usher in the president’s arrival to the state. Biden spoke to a room full of 275 people in Waukee, west of Des Moines, in an event touted as a rebuttal to Trump’s rally.

BIDEN UNLEASHES ON TRUMP IN FINAL IOWA BLITZ: 'HE'S MORE OF A BULLY THAN A PRESIDENT'

“He’s more a bully than a president,” Biden said.

“Welcome to Donald Trump’s world. Up is down. Lies are the truth. Allies are enemies. Everything is through the looking glass,” Biden continued.

Trump touted the U.S.-Mexico-Canada Agreement [USMCA] trade deal he signed on Wednesday to replace NAFTA, as well as the U.S.-China trade deal, specifically how it would help farmers in Iowa. "You farmers in Iowa are going to have to get bigger tractors and a hell of a lot more land," Trump said.

"We have never had a better relationship with China than we do right now," Trump continued. "They respect us, the whole world respects us."

The president said when "CNN fake news" interviewed farmers, they "couldn't find anyone to say anything bad about Trump."

"They said, 'What do you think about Trump, isn't it horrible what he's doing on trade?' They said, 'No, he's doing what should've been done 20 years ago." 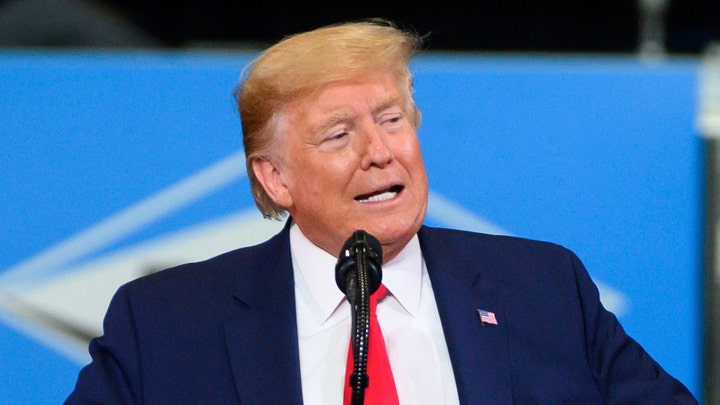 Trump said that while Republicans have been "creating jobs and killing terrorists," Democrats have been "obsessed with the deranged witch hunt hoax."

He added, "They want to nullify your ballots and overthrow the entire system of government."

Trump cheered positive economic signs before pivoting to immigration. "Right now we have a love affair with Mexico," the president said. "Democrats wouldn't give us what we needed, so I got Mexico to put up 27,000 soldiers on our border," which vastly drove down border apprehensions, according to Trump. He also pointed out how illegal border crossings have gone down for seven straight months in a row.

"Democrats want hundreds of thousands of people to flow into our borders," Trump said.

"I should've said we will never ever build a wall, and they would've given me so much money to build a wall," the president chided. He said the wall he has been building has been the "expensive" version, the "best" version.

The president also said human trafficking was the "worst it's ever been all over the world, in the history of the world" and the wall will stop that.

Trump then listed accomplishments such as school choice for every child who needs it, bipartisan criminal justice reform, confirming 191 judges and eliminating the estate tax. "If you love your children, that's a great thing, if you don't love your children, don't leave it to them," he added.

He then listed his administration's achievements in science and medicine, saying he had been told that in less than 10 years the AIDS epidemic would be eradicated.

"America is thriving like never before, ladies and gentleman of Iowa, and the best is yet to come," Trump concluded.

Hours before Trump took the stage, Vice President Mike Pence met with Iowa supporters at a fast food joint. Just after a speech to evangelical voters in Sioux City, Pence stopped at a Culver’s, a midwestern staple known for its “ButterBurgers.” He then continued on to Council Bluffs, Iowa to speak to Trump supporters at a “Veterans for Trump” event.