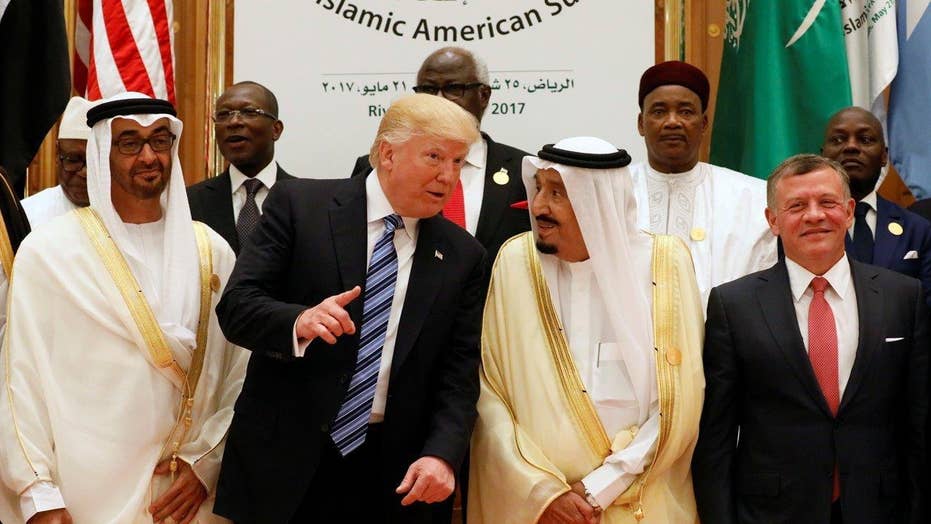 President Trump Sunday in a highly-anticipated speech to Muslim leaders during his first foreign trip called for unity between the U.S. and Middle Eastern nations in the fight to “stamp out extremism.”

During his second day of his first trip abroad, Trump’s speech in Riyadh, Saudi Arabia addressed the leaders of more than 50 Muslim-majority countries to challenge extremism by cutting off the financing of terrorist groups.

Trump announced the six-nation Gulf Cooperation Council, which is committed to prosecuting the financing of terrorism.

“Our goal is a coalition of nations who share the aim of stamping out extremism and providing our children a hopeful future that does honor to God,” Trump said.

“We are not here to lecture — we are not here to tell other people how to live, what to do, who to be, or how to worship,” Trump added, noting terrorists must be condemned not rewarded. “Instead, we are here to offer partnership — based on shared interests and values — to pursue a better future for us all.”

Saudi Crown Prince Mohammed bin Nayef and U.S. Secretary of State Rex Tillerson will sign the memorandum of understanding in Riyadh, according to Reuters.

“This is not a battle between different faiths, different sects, or different civilizations,” the president added, noting the U.S. is prepared to stand with Middle Eastern nations  in pursuit of common security.

The president has been enthusiastically embraced in Riyadh, where the ruling royal family of Saudi Arabia has welcomed his aggressive stance on Iran, its regional foe.

According to The Associated Press, Trump slammed Iran for spreading “destruction and chaos” throughout the region. His comments were echoed by Saudi King Salman, who declared, “The Iranian regime has been the spearhead of global terrorism.”

In his first overseas trip as president, Trump also pledged to work with Saudi Arabia to bring peace to the Gulf region and forge stronger economic ties, in large part through a roughly $10 billion arms deal.

The arms deal is part of large, $350 billion economic packages between the ally nations.