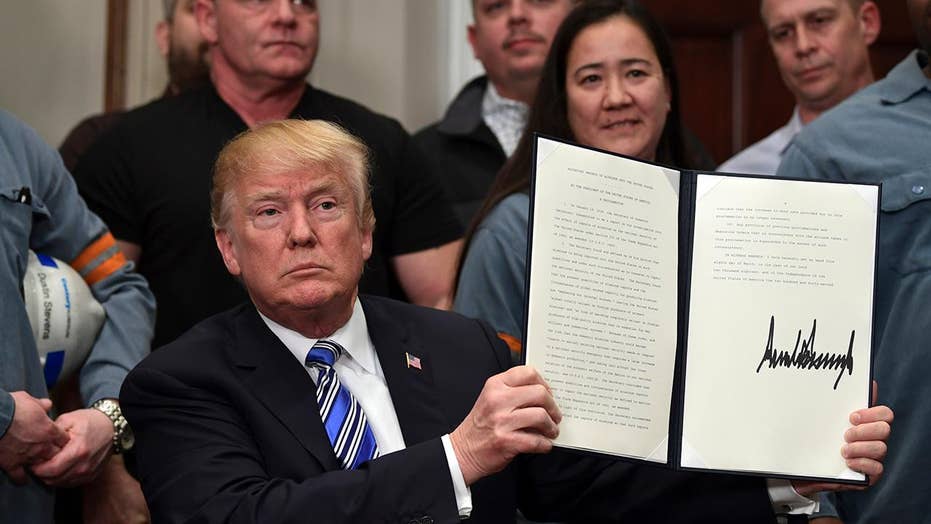 Trump says his administration will protect U.S. steel and aluminum, but will show flexibility to 'real friends' of the U.S.

President Trump signed an order Thursday that imposes tariffs on steel and aluminum imports from all foreign countries, while carving out an exception for Canada and Mexico for now while North American Free Trade Agreement (NAFTA) negotiations are under way.

The president, joined by steel and aluminum workers, signed a companion proclamation — one on steel and one on aluminum – instituting a tariff of 25 percent on steel and 10 percent on aluminum imports. The tariffs will become effective in 15 days, with exclusions for Mexico and Canada taking effect “immediately,” officials said.

"You are truly the backbone of America, you know that. Very special people," Trump told the workers. "We have to protect our steel and alumnium industries while at the same time, showing great flexibility with people who are really friends of ours."

"This is not merely an economic disaster, but it's a security disaster," Trump said. "Today, I'm defending America's national security."

The U.S. is the world’s largest importer of steel, importing nearly four times as much as it exports, according to the White House. The U.S. imported five times as much primary aluminum as it produced in 2016.

"It's a process called dumping. And they dumped more than any time, on any nation, anywhere in the world, and it drove our plants out and our businesses out," Trump said.

The administration's move to impose tariffs came after a nine-month investigation, led by Ross, and interagency meetings from April 2017 through January 2018, which found that the current level of aluminum and steel imports to the U.S. had the “potential to threaten our national security.”

Trump said the investigation documented a "growing crisis" in U.S. steel and aluminum industries, which he said have been "ravaged."

"The steel industry has been ravaged by aggressive foreign trade practices, an assault on our country... It's been an assault, they know better than anybody," Trump said. "And I've been talking about this for a long time, longer than my political career."

The president blasted politicians, noting they "never did anything about it."

"Our factories were left to rot and to rust all over the place. Thriving communities turned into ghost towns. Not any longer," Trump said. "The workers who poured their souls into building this great nation were betrayed, but that betrayal is over."

A senior official said Thursday that the Commerce Department investigation "provided the president with the powers to take actions, should the department find that imports of commodities like aluminum and steel provide a significant threat to our national security and economic security." The official noted that national security was "broadly defined," not limited to national defense.

Aluminum is used in a range of ground weapons and aircraft, and steel is required for aircraft carriers, amphibious force ships, submarines, tanks and light armored vehicles. The White House said the investigation rendered the U.S. "unable" to produce enough steel and aluminum to meet national defense and critical industry needs in the event of a national emergency.

He added: "We're urging all companies to buy American. That's what we want. Buy American."

The move though, should not be a "surprise," according to the official, who called it another "promise made" and "promise kept" by Trump.

"No one should be surprised with any kind of action we’re taking," the official said. "This is one of the most well-discussed, well-signaled actions in the history of trade actions."

The official said Thursday that there is language in the proclamation outlining "security relationships" with countries around the globe, and noted that "they will be welcome to discuss" with the U.S. "alternate ways" to tariff the imports.

"America will remain open to modifying or removing the tariffs for individual countries," Trump said. "So long as we can ensure their products no longer threaten our security."

Trump said that Lighthizer would be responsibile for negotiating tariffs with other nations.

Trump said hat Mexico and Canada would be exempt from the tariffs during NAFTA negotiations, noting that if there is no deal, he will "terminate NAFTA and start all over again."

"I have a feeling we're going to make a deal on NAFTA. I've been saying it for a long time," Trump said. "If we do, there won't be any tariffs on Canada or Mexico."

"If that [NAFTA] negotiation is unsuccessful then tariffs will be applied across the board," Peter Navarro, the director of the White House National Trade Council, told Fox News. "Now, importantly, in addition to that, there is language that will allow other countries to effectively propose ways that they could get a similar dispensation in exchange for more fair and reciprocal trade with the United States."

Trump introduced a recipricol tax--or a mirror tax, saying "they charge us 50, we charge them 50."

"Right now, they charge us 50, we charge them nothing," Trump said. "We just want fairness. We want everything to be recipricol and I think in the end we're going to have a lot of great jobs, a lot of great companies, all coming back into our country."

But the 25 percent and 10 percent levels should not be seen as firm, officials said. Navarro added that if Canada, Mexico, or any other country is eventually granted an exemption, then tariffs would be raised for all other countries affected.

The president, himself, has said the U.S. would be "very fair."

"[We’re] sticking with 10 and 25 percent initially," Trump said earlier Thursday during a Cabinet meeting on Thursday. "I’ll have a right to go up or down, depending on the country."

Trump added, though, "We’re going to be very flexible."

Navarro told Fox News that the president was not using the tariffs as a "bargaining chip," but noted that "any country that is allowed to be removed from the tariffs would result in higher tariffs for everybody else."

He aded, "So we still maintain a level of protection in defense of the aluminum and steel industries."

"The decline of American steel and aluminum production has resulted in extensive job losses for hardworking Americans in industries critical to our national security and economic well-being," the White House said Thursday, noting that despite "considerable growth in demand," six primary aluminum smelters have permanently shut down since 2012.

"It's going to make a huge difference. This is the start of a process," Ross said on Fox News' "Your World" after the president signed the order. "The process is aimed at leveling the playing field globally."

After the president signed the order, Ross said the president was just keeping campaign promises, and "unleashing" Americans from "unfair trade practices that have hounded us for years."

"Anybody that doubts the president's sense of conviction in his willingness to be very, very aggressive really misses the boat," Ross added.

Ross noted that this is the first time the U.S. has "really pushed back on this kind of scale."

"It's taking some of the other countries, both our allies and those that are less allied with us, taken them a little while to realize this is not the old administration," Ross said. "This is a different administration. It's forceful, it is determined, it is serious and thoughtful, deliberative about the issues, but make no mistake about it, at the end of the day, we need and we will get lower trade deficits and we will stop exporting jobs and start exporting more products instead."