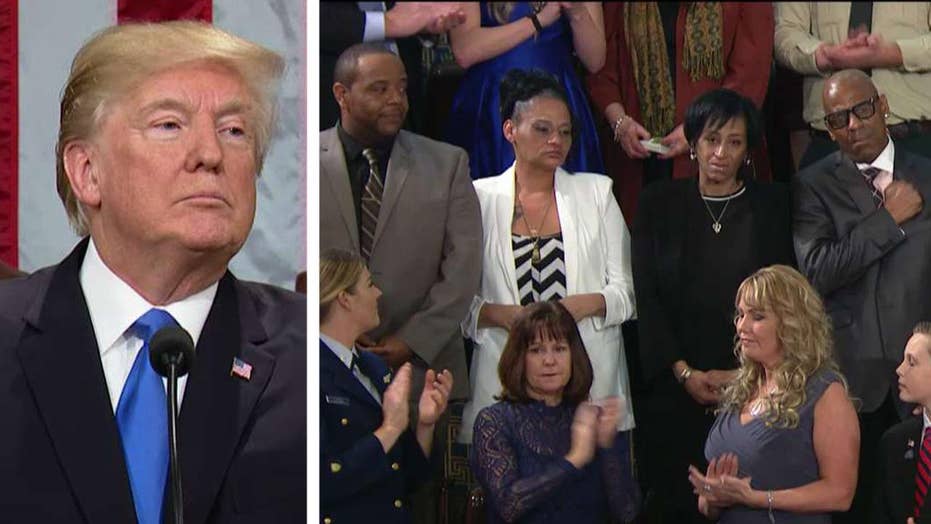 President Trump honored the parents of MS-13 victims Tuesday during his first State of the Union address, saying that “everyone in America is grieving for you.”

The White House extended State of the Union invitations to parents Evelyn Rodriguez and Freddy Cuevas and Elizabeth Alvarado and Robert Mickens, whose teenage daughters were killed by MS-13 gang members in 2016.

“Everyone in America is grieving for you. And 320 million hearts are breaking for you,” the president said. “We cannot imagine the depth of your sorrow, but we can make sure that other families never have to endure this pain.”

The president called on Congress to “finally close” the “deadly loopholes” that allow MS-13 and other criminals to “break into our country.”

The president noted that the administration and congressional Republicans proposed new legislation that would “fix” immigration laws and support immigration law enforcement officers. He tied his concerns about MS-13 to immigration talks over a plan he hopes will include security measures while also preserving so-called DACA protections.

“My duty, and the sacred duty of every elected official in this chamber, is to defend Americans—to protect their safety, their families, their communities, and their right to the American Dream,” Trump said. “Because Americans are dreamers too.”

The body of Alvarado and Mickens’ 15-year-old daughter, Nisa Mickens, was found on a tree-lined street in Brentwood, N.Y., on Sept. 13, 2016—a day before her 16th birthday.

Rodriguez and Cuevas’ 16-year-old daughter, Kayla Cuevas, was beaten and stabbed to death by MS-13 gang members in 2016. Her body was found the day after Mickens was found.