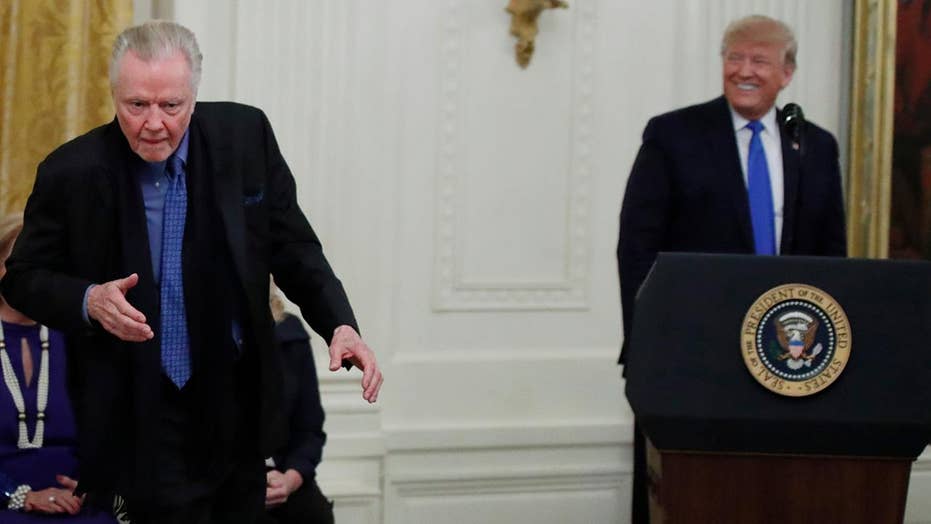 The president speaks at the presentation of the National Medal of Arts and the National Humanities Medal in the White House.

President Trump on Thursday honored eight people with the National Medal of the Arts and the National Humanities Medal -- four in each category.

Recipients included novelist James Patterson, actor Jon Voight, and the musicians of the U.S. military, among others.

“These are the highest honors available for contributions to American art and culture,” the president stated. Vice President Pence, Treasury Secretary Steve Mnuchin and Education Secretary Betsy DeVos were in the audience for the ceremony.

Trump began by honoring actor Voight, whom he called a “great friend” and “one of America’s greatest living legends.” Trump called Voight’s movie “The Champ” “the greatest boxing movie of all time.”

“Everyone was crying at the end of the movie but I tried not to, John,” Trump added.

Voight has starred in dozens of feature films since the late 1960s, when he rose to prominence for his Oscar-nominated role in “Midnight Cowboy.” Voight, the father of actors Angelina Jolie and James Haven, is also known for his roles in “Coming Home,” “Heat,” “The Rainmaker,” and “Ali.” More recently, he was seen in the “National Treasure” series, “Zoolander,” and “Four Christmases,” among others. Voight was an outspoken liberal in his early career, protesting the Vietnam War alongside actress Jane Fonda. However, he endorsed both Sen. Mitt Romney in 2012 and President Trump in 2016. He spoke at an inauguration rally for Trump in January 2017.

“We love having you here, especially since it happens to be somebody that I really like,” said Trump.

Trump then presented a medal to Sharon Rockefeller.

Sharon Percy Rockefeller was the wife of former West Virginia Sen. Jay Rockefeller, but her philanthropic work and public advocacy are what earned her the medal. As first lady of West Virginia, Rockefeller worked on behalf of the state’s schoolchildren, among other causes.

Rockefeller promoted the Public Broadcasting Service and served as the CEO and president of WETA, D.C.’s flagship public television and radio stations. She chairs the Board of Trustees for the National Gallery of Art. She also serves on the board of the Museum of Modern Art, Sibley Memorial Hospital and the Rockefeller Foundation.

Next, Trump presented a medal to author Patterson, whom he called a personal friend and “one of the most prolific and talented fiction authors of all time.”

Patterson has written 277 books and sold over 400 million copies. “You’ve sold a lot more books than me. More than anyone except maybe one -- the Bible has you by a little bit,” said Trump.

Among Patterson’s works are “Red Alert,” “Along Came a Spider,” “The President is Missing” which he co-wrote with former President Bill Clinton, and “Filthy Rich,” a story of disgraced financier Jeffrey Epstein, published in 2016, years before the shocking 2019 revelations that led to his arrest and subsequent apparent suicide.

Of Patterson’s works, 218 titles have earned a spot on The New York Times bestseller list, and 95 have ranked No. 1.

Trump then turned to Allison Krauss. Krauss is an American bluegrass-country singer. She’s won 27 Grammy awards and 42 nominations, earning more Grammy awards than any other woman. She’s known for hits such as “Every Time You Say Goodbye,” “Baby Now That I’ve Found You,” “Whiskey Lullaby” and "When You Say Nothing at All.”

The president then honored Patrick O’Connell as “one of the greatest chefs of our time.” O’Connell opened The Inn at Little Washington, which Trump said he and the first lady planned to visit.

Also honored was the Claremont Institute for informing Americans how America’s founding principles “made this nation the greatest of anywhere on earth.”

He then honored Teresa Lozano Long for her support of the arts. Together with her husband, Long has donated over $130 million to universities and institutions in Texas. She is also the namesake of the Teresa Lozano Long Institute of Latin American Studies (LLILAS) at the University of Texas at Austin, for which she and her husband created a $10 million endowment.

Lastly, Trump recognized the musicians of the U.S. military. “Forming 136 bands worldwide, they perform over 35,000 times each year, from concert halls to war zones,” the president said. “Many could be in great concert halls of the world but this is where they want to be.”