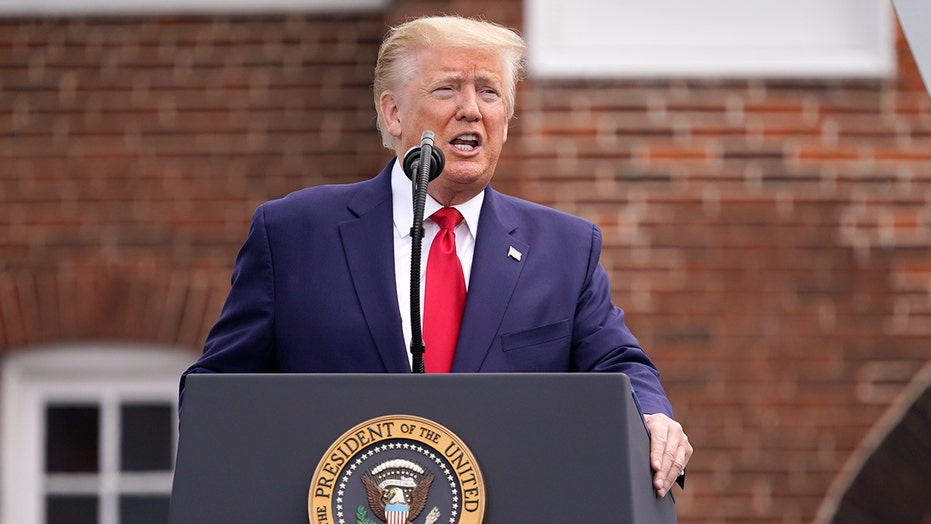 President Trump on Monday visited Arlington National Cemetery and Baltimore’s historic Fort McHenry to honor fallen soldiers for Memorial Day as he touted America's long history of courage and fortitude in the face of adversity -- and sought to once more rally that national spirit in the fight against the coronavirus pandemic.

"Together, we will vanquish the virus, and America will rise from this crisis to new, and even greater heights," Trump said at Fort McHenry National Monument and Historic Shrine. “As our brave warriors have shown us from the nation’s earliest days – in America, we are the captains of our own fate.

"No obstacle, no challenge, and no threat is a match for the sheer determination of the American people," Trump continued. "This towering spirit permeates every inch of the hallowed soil beneath our feet."

Trump praised the tens of thousands of service members and national guardsmen on the frontlines of the "war against this terrible virus."

"We mourn alongside all of the families who have lost a loved one – including the families of our great veterans," Trump said. 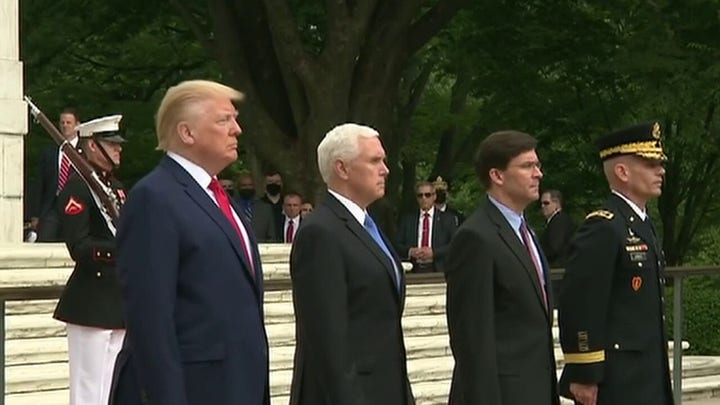 Trump honored the heroics of the American soldiers who stood their ground and repelled a British invasion in the Battle of Baltimore during the War of 1812. Fort McHenry is near where Francis Scott Key wrote the poem -- inspired by a huge American flag that was hoisted to celebrate the important victory over the British -- that became "The Star-Spangled Banner."

“Every time we sing our anthem – every time its rousing chorus swells our hearts with pride— we renew the eternal bonds of loyalty to our fallen heroes," Trump said. "We think of the soldiers who spent their final heroic moments on distant battlefields to keep us safe at home. We remember the young Americans who never got the chance to grow old but whose legacy will outlive us all.”

"We pledge in their cherished memories that this majestic flag will proudly fly forever," Trump said at Fort McHenry before a backdrop of American flags waving in the breeze.

Fort McHenry has been closed to visitors during the pandemic and Baltimore's mayor had urged Trump to forgo his planned visit amid the city’s stay-at-home order.

But Trump persisted to honor the fallen while also sending a clear signal to the country that his agenda will be business-as-almost-usual amid the coronavirus pandemic.

“I stand before you at this noble fortress of American Liberty to pay tribute to the immortal souls who fought and died to keep us free," Trump said.

A 21-gun salute greeted Trump as he arrived at the solemn ceremony. Trump, first lady Melania Trump, Vice President Pence and second lady Karen Pence attended to pay tribute to those who made the ultimate sacrifice in defense of America’s freedoms.

In Arlington, Trump saluted as members of the military played the National Anthem and Taps while Pence and Defense Secretary Mark Esper stood next to him with their hands on their hearts. Trump paused before the tomb with his hands clasped in front of him, touched the wreath -- adorned with a red, white and blue ribbon -- and then saluted again.

President Donald Trump salutes after placing a wreath at the Tomb of the Unknown Soldier in Arlington National Cemetery, in honor of Memorial Day, Monday, May 25, 2020, in Arlington, Va. (AP Photo/Alex Brandon)

The military personnel and some VIPs in attendance had been wearing masks on the steps of the monument prior to the arrival of the Trumps and the Pences. But an unknown woman approached the dignitaries and asked everyone to take them off. Much of the group stood socially distanced on the outdoor stairs. Secretary of State Mike Pompeo was spotted putting on a mask decorated with stars and stripes as he left the ceremony.

"I wish that the president, as our nation's leader, would set a positive example and not travel during this holiday weekend," Young, a Democrat, said in a statement. “That President Trump is deciding to pursue nonessential travel sends the wrong message to our residents, many of whom have been disproportionately impacted by the COVID-19 virus."

The White House was not convinced.

"The brave men and women who have preserved our freedoms for generations did not stay home and the president will not either as he honors their sacrifice by visiting such a historic landmark in our nation's history," White House spokesman Judd Deere said in a statement Sunday.

Trump visited Baltimore just over a week after Maryland began to lift some of the restrictions put in place for the coronavirus, though they remain in effect in Baltimore. Baltimore and the Washington, D.C., area have the nation's highest percentages of positive cases, according to Dr. Deborah Birx, coordinator of the White House coronavirus task force.

As Trump marks a solemn day on the American calendar, the country also will mark a grim milestone this week, with the pandemic expected to claim its 100,000th American.

“Today, we honor the heroes we have lost," Trump said Monday in Baltimore. "We pray for the loved ones they left behind. And with God as our witness, we solemnly vow to protect, preserve and cherish this land they gave their last breath to defend.”