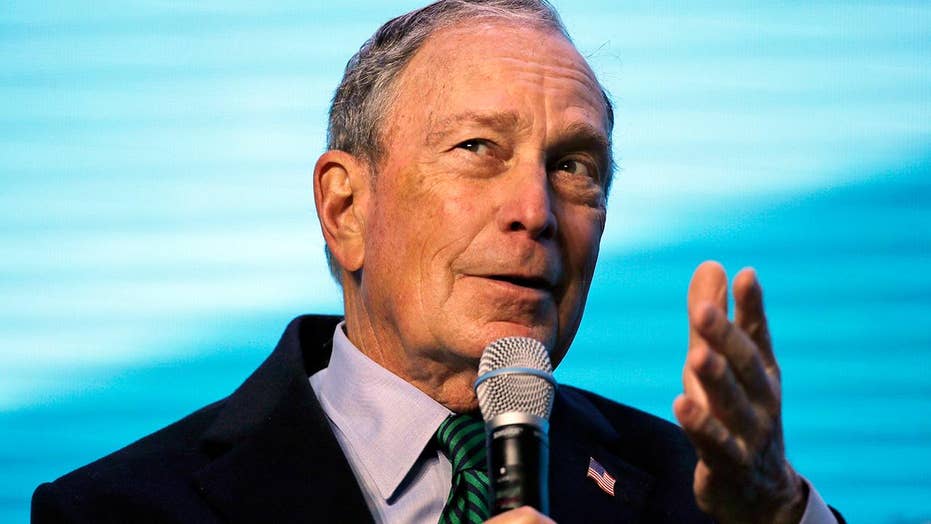 “Mini Mike Bloomberg is spending a lot of money on False Advertising. I was the person who saved Pre-Existing Conditions in your Healthcare, you have it now, while at the same time winning the fight to rid you of the expensive, unfair and very unpopular Individual Mandate,” Trump tweeted.

“And, if Republicans win in court and take back the House of Representatives, your healthcare, that I have now brought to the best place in many years, will become the best ever, by far,” he continued. “I will always protect your Pre-Existing Conditions, the Dems will not!”

Minutes later, Bloomberg sent a snarky tweet in response, encouraging the president to tag him in his future tweets.

"@ us next time," Bloomberg tweeted.

Bloomberg went on to add: "Glad to see you're watching our ads, @realDonaldTrump. I know management isn't your strong suit, so perhaps you don't know your Justice Department supports a suit that would undermine protections for pre-existing conditions. Now that you know, why not ask them to drop the suit?"

Bloomberg was referring to a Justice Department opinion that said the Affordable Care Act should be overturned, including provisions that require insurance companies to cover individuals with pre-existing conditions.

The back-and-forth over health care between the two New Yorkers centers on the Bloomberg campaign's unprecedented ad blitz, both touting his own record as mayor and hitting Trump's record as president.

Last month, the Bloomberg campaign put out an ad saying Trump's threat to repeal ObamaCare was “threatening coverage for millions of Americans,” while highlighting Bloomberg’s record to provide health care for more than 2,000 employees of his company, and touting his record during his time as mayor of New York.

“Mike Bloomberg knows the value of quality health care. As mayor of New York City, Mike cut the number of uninsured people by nearly half, expanded healthcare for working families and improved care for seniors,” the ad said.

“It’s time to get real and fix health care. People don’t have the health care that they need and this is America,” Bloomberg is heard saying in the ad. “We can certainly afford to make sure that everybody that needs to see a doctor can see a doctor.”

“As president Mike will provide universal access to affordable health care, lower costs by capping health care prices and expand access to women’s health services,” the ad said. “How do you know Mike Bloomberg will deliver on health care? Because he’s done it before.”

Meanwhile, Trump touted his administration’s elimination of the individual mandate—the ObamaCare penalty that served as the linchpin of former President Barack Obama’s signature health care law. The requirement to buy insurance or face a penalty, or a tax, was ended as part of the Republican tax overhaul that passed in late 2017.

Under the Affordable Care Act, the individual mandate required most people to have health insurance meeting specific standards. The law imposed tax penalties for violations. The idea behind the mandate was to ensure that young and healthy customers were buying into the system, to offset the cost of taking on more sick and elderly customers.

An effort by the White House and Republican allies to repeal-and-replace ObamaCare in 2017 failed in the Senate, but lawmakers in Washington have been chipping away at key parts of the law ever since.

Included in a massive spending bill last month was a repeal of three ObamaCare taxes. This included the so-called "Cadillac tax," a 40 percent tax on high-cost employer-based medical plans; the medical device tax, imposed on equipment such as X-ray machines; and an annual fee on health insurance providers.