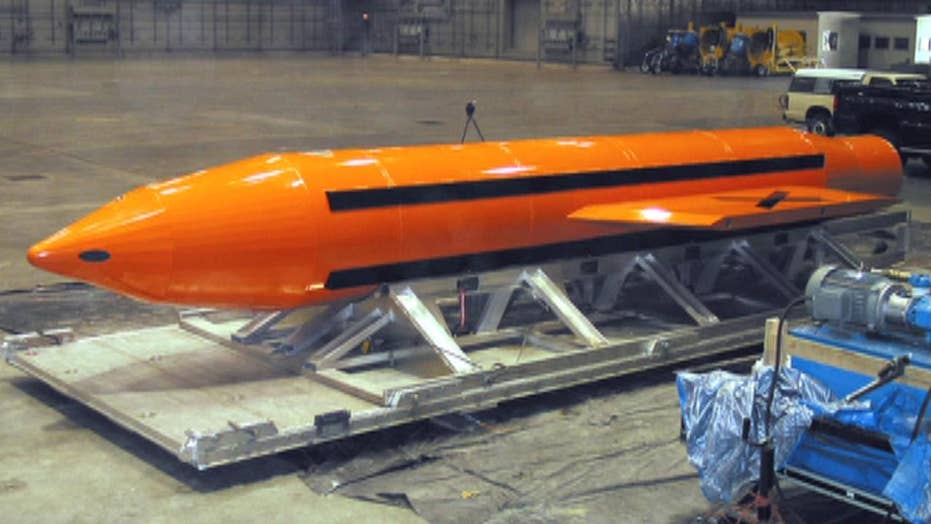 President Trump on Thursday hailed the military's "very, very successful" strike on ISIS fighters in Afghanistan, after the first-ever deployment of America's largest non-nuclear bomb -- known as the MOAB.

The Pentagon announced that the GBU-43B, a 21,000-pound bomb, was dropped on an ISIS tunnel complex in Nangarhar Province. The MOAB -- Massive Ordnance Air Blast -- is also known as the “Mother Of All Bombs.” It was first tested in 2003, but hadn't been used in combat until Thursday.

“We have given [the military] total authorization,” Trump said ahead of a meeting with first responders. “Frankly, that’s why they’ve been so successful lately.”

“We have incredible leaders in the military, we have an incredible military and we’re very proud of them, and this was another very, very successful mission,” he said.

White House Press Secretary Sean Spicer said earlier at his daily press briefing that the strike was done to deny ISIS "operational space." Spicer said the weapon “targeted a system of tunnels and caves that ISIS used to move around freely.”

“The U.S. takes the fight against ISIS very seriously and to defeat the group we must deny them operational space – which we did.”

When asked if the U.S. would consider using the device in other combat zones, Spicer referred questions to the Pentagon.

The bombing comes just days after a Green Beret was killed fighting ISIS in the region, a U.S. defense official told Fox News. Also Thursday, Defense Secretary James Mattis met with his Turkish counterpart at the Pentagon about how to defeat ISIS in Syria.