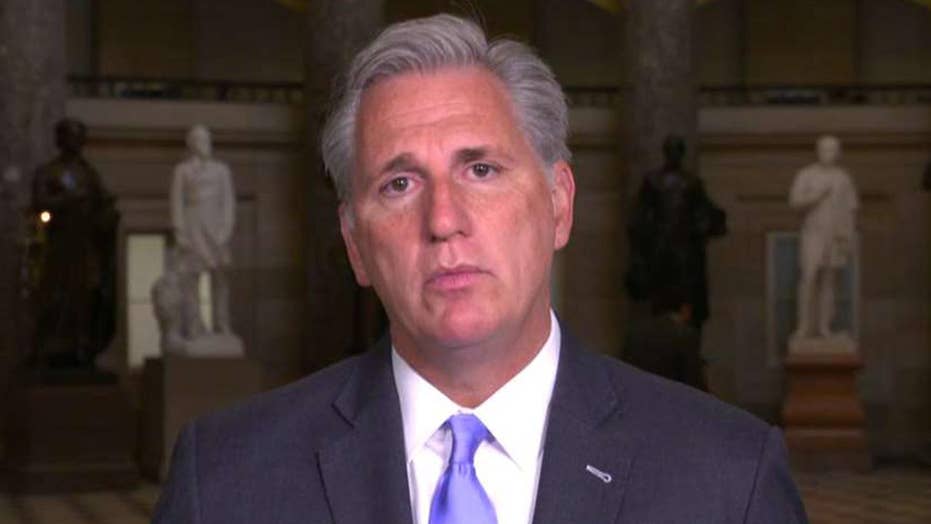 Rep. Kevin McCarthy on where tax reform stands in the House

Congress had just approved a big economic plan, and the president signed it into law. Then it wasn’t long until the White House appealed to Congress to slash spending.

This is the script President Trump seemingly followed as he signed a bipartisan, $1.3 trillion spending package late last month. Now Trump is demanding that lawmakers rescind some of the spending allocations from that very bill.

Congress approved a $496 billion, five-year economic stimulus package at the behest of former President Bill Clinton in August 1993. Still, Clinton insisted that lawmakers then find $10-15 billion in additional cuts over the same five-year period. This would be a challenge for Congress.

Many of the spending allocations lawmakers approved went toward government “investments.” More jobs for park rangers. Additional battleships. But by the same token, Clinton wanted spending reductions to unwind the deficit.

The oscillations of Clinton and Trump aren’t new. Who wouldn’t like to have it both ways? Spend money on programs and simultaneously cut spending? And believe it or not, there is a budgetary provision that allows Congress and the president to attempt to pare down spending on which everyone has just signed off.

The term is “rescission.” It’s pronounced ruh-SIZH-unn. It’s a fancy fiscal word for “spending cancellation.” The Congressional Budget Act of 1974 permits lawmakers and the president to take a mulligan on appropriations if everyone suffers from buyer’s remorse. Lawmakers may then vote to “rescind” certain chunks of money.

Back in 1993, Clinton proposed $11 billion in cuts. He asked to nullify allocations for military construction projects, energy and water programs, university research and bus terminals.

Trump is still sifting through the legislative tool box in Washington, and the rescissions process is an instrument at his disposal. It’s not out of the question for the chief executive to consider a rescissions request if they’re dyspeptic about the omnibus measure.

The administration and House Majority Leader Kevin McCarthy, R-Calif., have reportedly been working for days on the recissions idea.

On his presidential campaign trail, Trump touted he would balance the budget in a decade. He even declared it would be “easy.” But any rescission legislation won’t make much of a dent in the deficit. We’re talking tens of billions of dollars at most.

And Trump is certainly not going to push for cuts to entitlements -- the biggest debt driver -- or military spending. Any propose cuts will be negligible at best when it comes to actual deficit reduction.

Here’s how a rescissions bill could work:

The administration would devise a list of targeted spending cuts to whittle away at the $1.3 trillion omnibus bill. But the legislation must originate with the House Appropriations Committee, the panel in charge of spending.

It is sometimes said there are three types of members of Congress: Democrats, Republicans and appropriators.

Members of the appropriations committee are a special breed, tailoring spending to individual projects and federal departments. It could be problematic to find appropriators willing to mince the very omnibus bill they just crafted.

And even if appropriators were willing to excavate the omnibus bill for cuts, it begs the question of why everyone favored all that spending a few weeks ago and now wants to slash it.

The appointment books of chiropractors in Washington will be full due to all of the cases of whiplash.

It was a laborious task just to assemble the omnibus spending bill and court the right mix of Democrats and Republicans to pass it. Republicans certainly couldn’t do it on their own despite holding the majority in both the House and Senate.

So the GOP majorities had to turn to Democrats. Thus, the bill included lots of Democratic priorities, just not Republican preferences like a boost in defense spending.

It was like walking a balance beam to engineer the omnibus bill in a way that it coaxed Democrats and Republicans to vote yes. Republicans certainly won’t earn Democratic support if all they do is hack away at Democratic spending programs.

Consider how narrow the line will have to be to craft a rescissions bill that wins just enough support to pass with only GOP votes. Republicans may like the concept of cutting. But it isn’t so easy when it comes to specifics.

And then, where is the conservative House Freedom Caucus?

The group didn’t like the omnibus. In fact, opposition to the omnibus by group members and other conservatives is why Republicans had to turn to Democrats to pass the measure in the first place. Could the GOP brass persuade the members to vote yes on a rescissions bill? Possibly.

But again, it may come down to the particulars. Some members may vote no because they think the bill doesn’t annul enough spending. That said, senior House GOP leadership sources tell Fox they can muscle through a rescissions bill with only Republican support with the blessing of Trump.

Keep in mind that Republicans negotiated the broad spending agreement to lift mandatory “sequestration” spending caps with Democrats back in February.

Then the sides worked side-by-side to forge the March omnibus bill. Democrats will balk if Republicans incinerate not one but two spending pacts. Republicans are now feverishly writing spending bills to fund the government for the new fiscal year starting October 1.

Republicans will struggle to fund the government on their own if they attempt a rescissions gambit. Democrats will retaliate by slowing down every spending bill, arguing that the GOP reneged on the deals cut in February and March.

A rescissions bill would have to advance through not only the House but the Senate before heading to Trump’s desk to become law.

A rescissions bill needs a simple majority to pass the Senate. Some Democrats may feel compelled to vote for spending nullifications as they look toward reelection in November. Ironically, it could be easier to advance a decisions package in the Senate than the House if most Republicans are on board, joined by a handful of Democrats.

But it will come down the specifics: what spending is voided and what’s not in a rescission bill.

Agreeing how to spell the word may prove easier than finding consensus on what to cut.