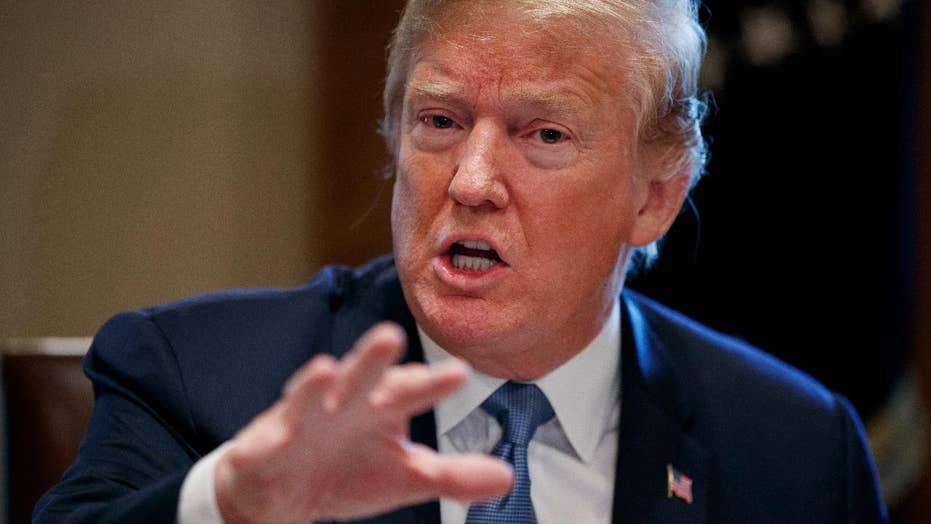 What's next for the Trump WH on the immigration debate?

Congress at an impasse on immigration reform as rhetoric heats up across the country.

President Trump on Thursday renewed his call to overhaul the deportation system so that illegal border crossers are swiftly sent back to their home countries and not processed by the immigration courts, likening the situation to stopping an intruder “on your front lawn.”

“Tell the people ‘OUT,’ and they must leave, just as they would if they were standing on your front lawn. Hiring thousands of ‘judges’ does not work and is not acceptable - only Country in the World that does this!” Trump tweeted.

He followed up with a message to Congress: "FIX OUR INSANE IMMIGRATION LAWS NOW!"

It was the latest in a series of sometimes-conflicting messages from the president on how Congress should address illegal immigration.

He suggested weeks ago that Republicans wait until after the November elections to take up the issue, but then urged the House to pass a sweeping Republican-authored immigration and border security overhaul. After it failed, Trump claimed over the weekend – on Twitter, the same social media forum he used to urge passage of the bill – that he “never pushed the Republicans in the House” to vote for it because it couldn’t pass in the Senate. He again called to elect more Republicans.

On Thursday morning, he returned to calling on Congress to act in the near-term.

“Congress must pass smart, fast and reasonable Immigration Laws now. Law Enforcement at the Border is doing a great job, but the laws they are forced to work with are insane. When people, with or without children, enter our Country, they must be told to leave without our … Country being forced to endure a long and costly trial,” he tweeted.

The tweets reflect an ever-changing – and always-challenging – legislative landscape on immigration. Democrats have hammered the Trump administration over the practice of separating families caught crossing the border illegally, as a result of “zero-tolerance” policies. Trump has moved to end that practice, but the controversy has complicated any chance of passing legislation.

Trump, meanwhile, has repeatedly suggested as he did Thursday that the federal government should institute a practice of simply sending border crossers back instead of using immigration judges to process their cases. Such calls have led to accusations that this would be wrongly denying due process.