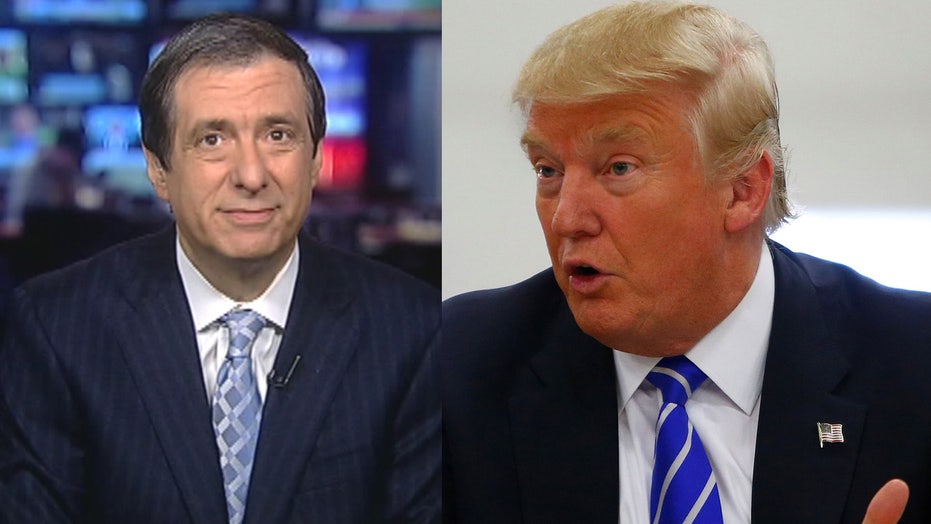 Donald Trump has talked himself into big trouble—and this time it’s not the fault of what he calls the “dishonest media.”

Even the most generous interpretation of his comments about Hillary Clinton and gun rights activists makes clear that he has again plunged the campaign into a debate over whether he violated the acceptable bounds of political speech.

The press can be awfully quick to make that case. A couple of weeks ago, most major news outlets reported, as if there was no debate, that Trump had invited Russian hackers to find or release Clinton’s 33,000 deleted emails. It seemed obvious to me he was being sarcastic, but the story line was Trump Invites America’s Adversary to Conduct Espionage Against Opponent.

But the current firestorm is more severe and raging out of control. Trump was telling a rally on Tuesday about how Clinton would “essentially abolish” the Second Amendment, which overstates her position on gun control. And then, in a clip we’ve all seen endlessly replayed:

“If she gets to pick her judges, nothing you can do, folks. Although the Second Amendment people, maybe there is, I don’t know. But I’ll tell you what, that will be a horrible day.”

It seems apparent that he is talking about Second Amendment people doing something to Clinton once she’s in office, since the comments are about the future, when she would be in a position to appoint federal judges.

Trump insists that’s not the case, telling Sean Hannity: “There can be no other interpretation. Even reporters have told me. I mean, give me a break. But they're dishonest people.” And his campaign said in a statement on the "dishonest media" that Trump was talking about “the power of unification,” meaning that Second Amendment supporters have the clout to stop Clinton from being elected in the first place.

Let’s say Trump was imprecise, or misspoke, or whatever. He still handed his detractors a club with which to beat him, this after the Khan controversy and weeks of media questioning whether he is disciplined enough to stay on message.

I don’t believe Donald Trump wants to incite violence against Hillary Clinton. But does he bear responsibility for an aside, or a joke, that many people heard that way?

This uproar is going to dominate the next few days, all but drowning out Trump’s message (and is drowning out the new controversy over emails showing favor-seeking between the Clinton Foundation and Clinton’s State Department).

That sometimes worked to Trump’s advantage during the primaries. The constant debates over whether he had gone too far turned one-day stories into five-day furors, allowing him to drive the campaign dialogue. But now he needs to expand his base beyond his GOP loyalists.

MSNBC’s Joe Scarborough went nuclear on Trump, calling for the Secret Service to interview him and for Republican Party to drop its nominee:

“A bloody line has been crossed that cannot be ignored. At long last, Donald Trump has left the Republican Party few options but to act decisively and get this political train wreck off the tracks before something terrible happens,” Scarborough wrote in his Washington Post column.

Trump, who has boycotted the show since May, tweeted: “Morning Joe's weakness is its low ratings. I don't watch anymore but I heard he went wild against Rudy Giuliani and #2A - sad & irrelevant!”

Here’s how the New York Times handled the story:

“Donald J. Trump on Tuesday appeared to raise the possibility that gun rights supporters could take matters into their own hands if Hillary Clinton is elected president and appoints judges who favor stricter gun control measures…

“Oblique as it was, Mr. Trump’s remark quickly elicited a wave of condemnation from Democrats, gun control advocates and others, who accused him of suggesting violence against Mrs. Clinton or liberal jurists.”

And the Los Angeles Times:

“Donald Trump is stuck in a destructive loop of his own making, his words increasingly at odds with his needs as the presidential campaign moves into its final phase….

“His latest self-generated controversy represented, at best, another day on defense, another day explaining what he meant, another day in which Trump, himself, overrode whatever message might have cut into the advantages held by Hillary Clinton, the unpopular Democrat who has the great good luck to have him as an opponent.”

There’s another line of liberal criticism, from Slate:

“Peeking out from behind these words is an unintentional truth: that for all the noises Trump has made throughout this campaign about the sanctity of the Second Amendment, he actually believes that gun enthusiasts are crazy. That is the subtext of the phrase ‘Second Amendment people’—a construction that is used to delineate a group of people who are in some way ridiculous and don’t deserve to be taken seriously.”

This is vaguely reminiscent of the controversy that Clinton generated when she was trying to justify staying in the race, while losing to Barack Obama, in the spring of 2008. "We all remember Bobby Kennedy was assassinated in June in California," she said. There was a media frenzy then too, and Clinton quickly apologized.

At some point the current controversy will burn itself out. But the media focus right now seems to be Trump vs. Trump, not Trump vs. Clinton, and that is bad news for the billionaire candidate.