Two incumbent red-state Democratic senators who have been the targets of some of President Trump's ire are facing increasingly tough odds to win re-election in November, a new poll shows, underscoring the challenges Democrats face in their bid to retake the Senate in November -- as well as Trump's continuing presence in key battleground states.

Montana Sen. Jon Tester and Missouri Sen. Claire McCaskill are locked in dead heats with their Republican challengers, according to the CBS News poll, with Tester leading Matt Rosendale by only two percentage points and McCaskill tied with Josh Hawley at 45 percent. Both results are firmly within the polls' margins of error, which are 5.2 and 3.3 percentage points respectively.

The results echoed the findings of a Fox News poll last week, showing McCaskill leading by only a whisker. Republicans hold a narrow 51-49 majority in the Senate, and because Vice President Mike Pence could break any potential 50-50 ties, Democrats need to take two seats to seize control of the chamber.

WATCH: TRUMP RIBS MONTANA VOTERS ABOUT TESTER, ASKS 'HOW DID HE GET ELECTED?'

But where polls have shown increasing prospects that Democrats may regain control of the House of Representatives, their chances in the Senate have always been lower, owing to the smaller number of seats on the ballot and Trump's popularity in key states that are holding Senate elections. 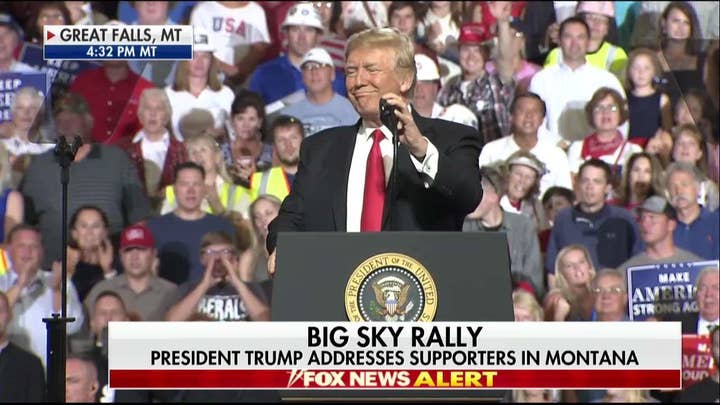 Trump has endorsed both Rosendale and Hawley, and plans to attend a rally for Hawley in Missouri this week. The president won both Montana and Missouri by double-digits in the 2016 presidential election, and he has made no secret of his disdain for both Tester and McCaskill, mocking them as "very dishonest" and "phony," respectively.

This past April, Trump called for Tester to resign after the White House issued a report disputing his allegations against the president's pick for the next secretary of Veterans Affairs, Ronny Jackson.

"Jon Tester doesn't share your values," Trump said at a July rally in Montana. "He showed his true colors with his shameful, dishonest attacks on a great man -- a friend of mine."

Tester responded: "It's my duty to make sure Montana veterans get what they need and have earned, and I'll never stop fighting for them as their senator."

Outside groups, including the National Republican Senatorial Committee (NRSC), have heeded Trump's call to oust Tester and have funneled advertising money into the state. But they voiced concern initially that Tester's rival had limited name recognition.

As for McCaskill, Trump tweeted in June that she was "so phony" for using a private plane for two of the three days of her supposed campaign RV tour.

"Senator Claire McCaskill of the GREAT State of Missouri flew around in a luxurious private jet during her RV tour of the state," Trump wrote. "RV’s are not for her. People are really upset, so phony! Josh Hawley should win big, and has my full endorsement."

For her part, McCaskill acknowledged that she had used a private plane, but insisted she had not used office funds and made no apologies for taking trips to see her constituents.

"I added some stops with the use of the plane, but I was on the RV so much that the broken drawer drove me crazy."

Trump's popularity and endorsements have been key factors in several races this midterm season, including pivotal contests in Ohio, South Carolina, Georgia and elsewhere. Republicans are hoping his influence will keep the Senate in GOP control for the next two years.