'45-Fest' kicks off with food, music hours ahead of Trump's 2020 campaign launch

Even though the event doesn’t start until 8 p.m. Eastern time, about 100 die-hard Trump supporters showed up as much as 42 hours early, lined up on the sidewalks outside the Amway center, sleeping in their tents overnight.

By morning, thousands have shown up, wearing Trump shirts, Trump hats and beyond excited to be here. All of them are hoping to be among the 20,000 people that will fit inside the arena.

It’s no secret why Trump has chosen Orlando for this. It’s in Florida and on the I-4 corridor that includes Tampa and Daytona Beach and is the purplest region in the state. It’s gone Bush, It’s gone Obama and in 2016 it went Trump, slightly, over Hillary Clinton.

That year, Trump won the state, by just 1.2 percent. Florida, once again, will be key to winning the presidency in 2020.

"Florida really is sort of the cornerstone of his campaign,” says Kevin Wagner, head of the political science department for Florida Atlantic University. "I think he recognizes that. I think his campaign people recognize it. It's one of the reasons Florida is the launching point for the re-election campaign, because it is hard to put together a coalition that amounts to victory without Florida.” 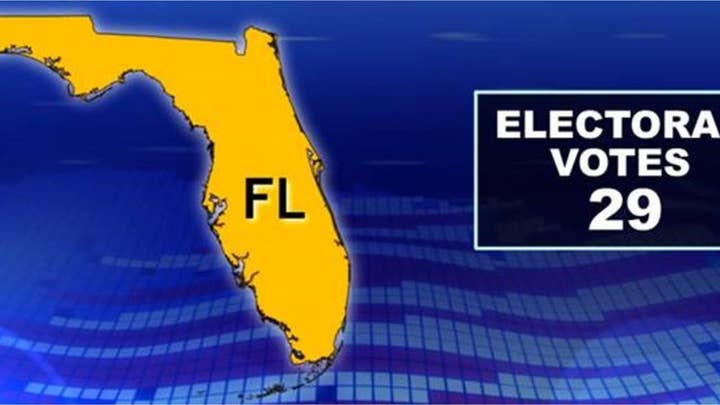 Florida and its 29 electoral college votes have been critical to victory for the past two decades, going back to Bush versus Gore, which Bush won by just over 500 votes.

Last November, Florida voters picked the state’s current governor and junior U.S. Senator. Out of 8 million votes cast and a two week, contentious recount, Republican Rick Scott beat incumbent Democrat Bill Nelson by just 10,000 votes in the Senate race. In the gubernatorial race, Republican Ron DeSantis beat Democrat Andrew Gillum by 32,000 votes. Again, out of 8 million ballots cast. Florida is just that close, that split and that much of a toss-up for 2020.

The Trump campaign is confident in the Sunshine State, despite data, like a recent Rasmussen poll, which shows 48 percent favorability for the president and 50 percent disapproval.

"This is history you are watching,” said Trump 2020 Press Secretary Kayleigh McEnany. "We all remember the iconic moment of President Trump coming down the escalator in Trump Tower. Well, this is the second rendition of his presidential announcement, his reelection announcement. It is a national address. It is a national event. It's one that we are particularly excited about. This is going to be a massive, massive deal."

The Democrats are also zeroing in Florida. Last week, the state party held its strategy meetings nearby at Disney World. And next week, the Democratic National Committee is holding its two candidate debates in Miami.