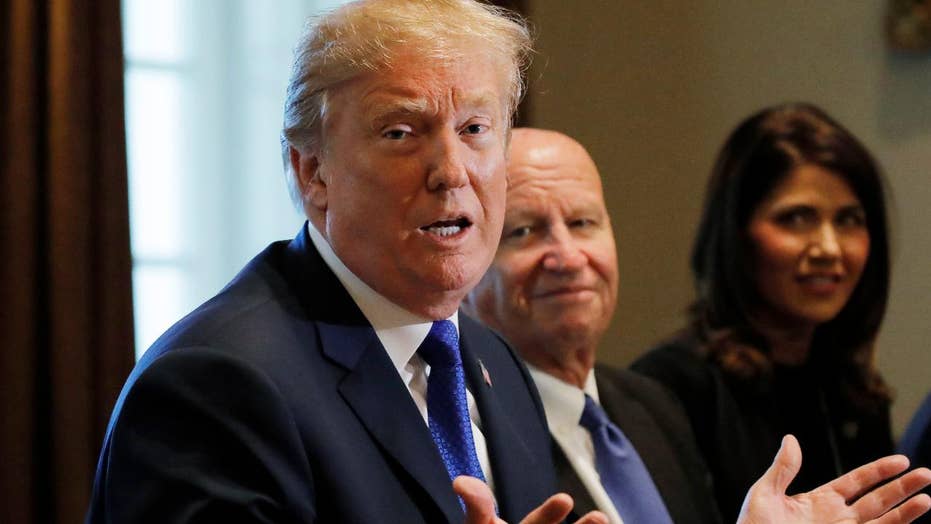 President Donald Trump visits Asia for a 12-day trip to five nations. The top issue to dominate his agenda: North Korea’s nuclear program, amid Pyongyang’s increased missile launches. Here’s what you need to know about his agenda and what’s at stake.

President Trump embarked on a 13-day trip Friday, with the first stop in Hawaii, ahead of his visit to five major Asian countries in his longest overseas trip to date amid the escalating North Korea threat.

The president and first lady departed the White House Friday morning, stopping to chat with reporters on their way to Air Force One.

“We are about to begin a long trip,” Trump said, noting that the White House had extended the trip, and added an extra day in the Philippines. “We have a big conference, a second conference. And I think we’re going to have great success.”

Trump said that he would be talking about “trade,” and the threat of North Korea.

“We’ll be enlisting the help of a lot people and countries and we’ll see what happens,” Trump said. “But I think we’re going to have a very successful trip. There is a lot of good will.”

According to administration officials, the president’s trip will be the longest trip to Asia by a president since 1991, when President George H.W. Bush was in office.

The president's trip comes amid the first charges in special counsel Robert Mueller's investigation into Russian meddling and potential collusion with Trump campaign associates during the 2016 presidential election.

Ahead of the trip, the president said it’s possible he could see Russian President Vladmir Putin while in Asia.

Trump said again Friday before boarding Air Force One that there was "no collusion."

Minutes after take-off, the president tweeted details of his trip.

"Just took off for ceremony @ Pearl Harbor. Will then be heading to Japan, SKorea, China, Vietnam & the Philippines. Will never let you down!" Trump said.

The president’s first stop, before heading overseas, is in Hawaii, where he will meet with U.S. Pacific Command, and visit Pearl Harbor and the Pearl Harbor memorial.

By Sunday, the president will be in Japan, where he is slated to meet with Japanese Prime Minister Shinzo Abe for meetings. As they did at Mar-A-Lago, Trump and Abe will play a round of golf at a country club in Japan—this time, joined by the world’s No. 4 golfer, Hideki Matsuyama.

Trump’s visit in Japan, according to the White House, will include meetings with service members and bilateral meetings.

The president is also expected to meet with families of Japanese citizens abducted by Kim Jong Un’s rogue regime.

Trump and Abe spoke earlier this week, and “affirmed the important of promoting a free and open Indo-Pacific region,” and “maintaining close coordination” between the United States and Japan, and with the international community “to maximize pressure on North Korea.”

The president’s next stop will be South Korea, where he will have a bilateral meeting with South Korean President Moon Jae-in. Trump will meet with service members, and also is slated for a speech at the National Assembly in Seoul.

A senior administration official told reporters during a White House background briefing this week that there was not enough time in the president’s schedule to accommodate a trip to the Demilitarized Zone, which has separated North Korea and South Korea for 64 years.

Instead of the DMZ, Trump will visit military base Camp Humphreys, which is set 40 miles south of Seoul, to highlight the U.S.-South Korean partnership.

The president’s trip to South Korea comes amid escalating tensions and rhetoric between the U.S. and North Korea.

Trump said in his United Nations speech in September that he would “totally destroy” the rogue nation, if necessary. He also has continually dubbed North Korean leader Kim Jong Un as “little Rocket Man.”

Trump’s next stop is China, an important visit that will draw much attention amid the president’s  expected requests for Chinese President Xi Jinping.

Trump is expected to ask Xi, whom he hosted at Mar-A-Lago earlier this year, to impose limits on oil exports and coal imports with North Korea, as well as broader limits on financial transactions with the regime, Reuters reported. China is responsible for more than 90 percent of all trade with North Korea.

“Melania and I look forward to being with President Xi & Madame Peng Liyuan in China in two weeks for what will hopefully be a historic trip!” Trump tweeted last month.

Trump’s next stop is Vietnam, where he will take part in Asia-Pacific Economic Cooperation (APEC) events, according to the White House.

Trump will go to the Vietnamese capital of Hanoi for an official visit and bilateral engagements with President Tran Dai Quang and other senior Vietnamese leaders.

The final stop for Trump is the Philippines. The president was only slated to be in the Philippines for one day, but on Friday announced an additional day.

Trump is set for a bilateral meeting with President Rodrigo Duterte, who has been accused of human rights abuses, including killing suspected drug dealers. The White House has said that Trump could raise concerns with the program, though Duterte and Trump shared a “warm rapport” during a phone conversation.

Trump  will celebrate the 40th anniversary of U.S.-ASEAN relations at the U.S.-ASEAN Summit and participate in bilateral meetings with Duterte and other leaders.

McMaster added that the president would “reiterate the plain fact” that North Korea is a “threat to the entire world,” also promising that Trump would continue to call on “all responsible nations” to isolate the North Korean regime “economically and politically.”