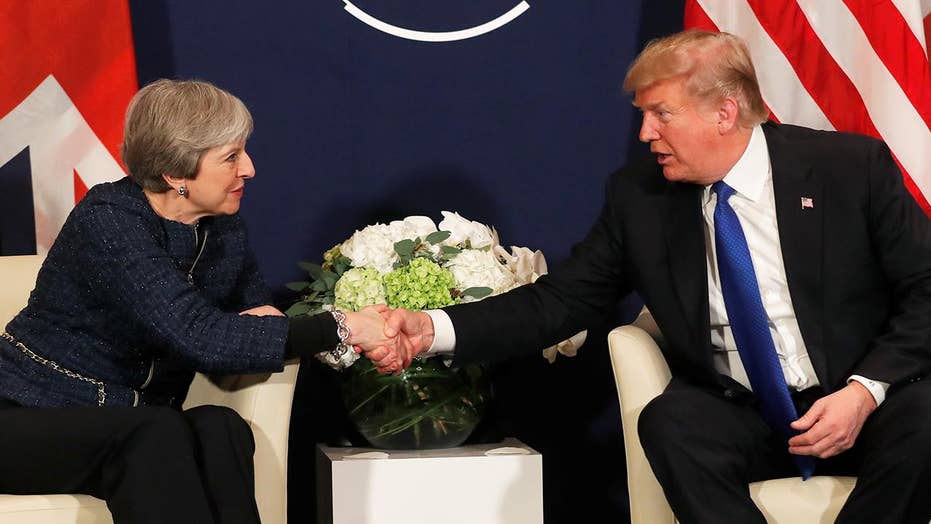 President Trump has risked damaging relations between the U.S. and the U.K. after reportedly taking a stinging shot at Prime Minister Theresa May’s approach to Britain’s "Brexit" negotiations with the European Union -- saying in an interview that he would have taken a "tougher" approach.

Trump made the remarks in an interview with host Piers Morgan to be broadcast Sunday. While the interview has not yet aired, Britain’s Mail on Sunday reported that Trump criticized May’s approach to the talks ahead of Britain’s departure from the bloc in 2019.

“Would it be the way I negotiate? No, I wouldn’t negotiate it the way it’s [being] negotiated… I would have had a different attitude,” he said, according to the Mail.

“I would have said that the European Union is not cracked up to what it’s supposed to be. I would have taken a tougher stand in getting out,” he added.

Morgan confirmed the outlet’s reporting by tweeting the story out and adding that Trump “has criticised Theresa May & the British Government for their handling of Brexit negotiations.”

The interview will likely increase pressure on the already-embattled prime minister, who has been criticized for her handlings of the negotiations from both pro-E.U. and Eurosceptic forces in the U.K. She has also faced opposition from members of her own party after the Conservative Party was wounded by weaker-than-expected results in the 2017 general election.

Trump’s remarks are also likely to damage an already rocky relationship between the two leaders, just days after the pair sought to present a unified front at the World Economic Forum in Davos, Switzerland. Trump said he wanted to correct a “false rumor” that they were not getting along.

“[May] and myself have had a really great relationship, although some people don't necessarily believe that. But I can tell you it's true,” Trump told reporters on Thursday. “I have a tremendous respect for the prime minister and the job she's doing. And I think the feeling is mutual from the standpoint of liking each other a lot.”

TRUMP, MAY TALK UP US-UK TIES IN DAVOS, DISMISS RUMORS OF STRAINED RELATIONSHIP

“We are very much joined at the hip when it comes to the military. We have the same ideas, the same ideals,” he said before turning to speak to May directly. “There's nothing that would happen to you that we won't be there to fight for you.”

May was similarly glowing in her praise of what she called a “really special relationship between the U.K. and the United States.”

“In fact ... stronger because we both face the same challenges across the world, and as you say, we're working together to meet those challenges,” she said.

Fox News later confirmed with 10 Downing Street that officials are working together on finalizing the details for a U.K. visit by Trump this year.

In the interview to be broadcast Sunday, Trump added that he predicted the Brexit result, and that he understands the concerns about immigration that led to the vote.

‘I know the British people and understand them,” he said, according to the Mail. “They don’t want people coming from all over the world into Britain, they don’t know anything about these people.”