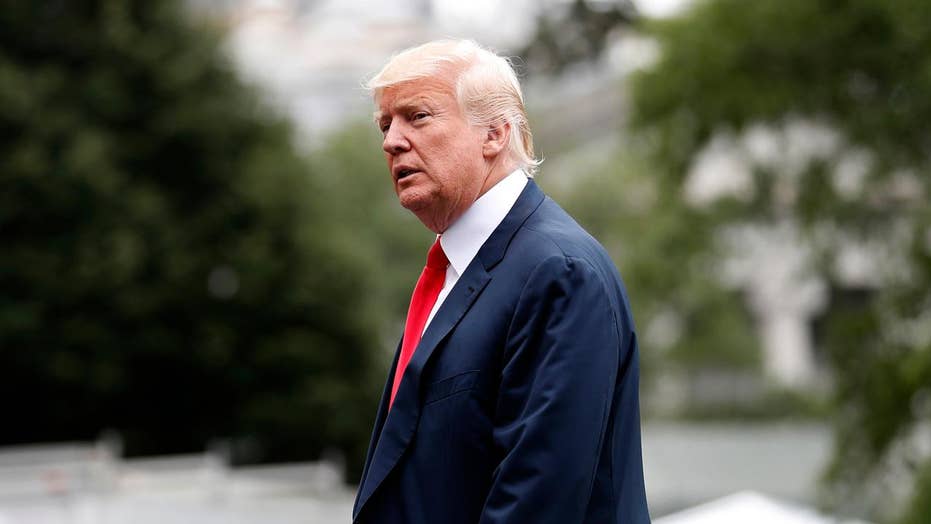 President Trump called on the NFL Tuesday to change its own rules to prohibit kneeling during the national anthem, while taking on the Dallas Cowboys directly for their protest during Monday Night Football.

"The NFL has all sorts of rules and regulations. The only way out for them is to set a rule that you can't kneel during our National Anthem!" Trump tweeted.

Earlier in the morning, the president also swiped at the Cowboys after the players -- along with owner Jerry Jones -- kneeled before the anthem ahead of their game against the Arizona Cardinals. Trump said there is "great anger" in the stands over these spectacles.

“The booing at the NFL football game last night, when the entire Dallas team dropped to its knees, was loudest I have ever heard. Great anger,” the president tweeted.

However, he added: “But while Dallas dropped to its knees as a team, they all stood up for our National Anthem. Big progress being made-we all love our country!”

The ratings-focused president also suggested that viewers at this point are largely tuning in to see who kneels, and then tuning out.

“Ratings for NFL football are way down except before game starts, when people tune in to see whether or not our country will be disrespected!” Trump tweeted early Tuesday.

The Cardinals stood with their arms locked as well on Monday night -- but in the end zone, as a field-length American flag was unfurled. An announcer urged fans to lock arms with those seated next to them, “no matter the color of their jersey.”

The feud began on Friday night at Trump’s rally in Alabama, when he called for players to be fired if they disrespected the flag.

“Wouldn’t you love to see one of these NFL owners, when somebody disrespects our flag, to say ‘get that son of a b---- off the field right now? Out! He’s fired! He’s fired!” Trump said to the crowd Friday, drawing criticism from multiple NFL players, as well as NFL Commissioner Roger Goodell.

The White House defended the president’s remarks on Monday, saying that it is “always appropriate” for the president of the United States to “defend” the flag and the anthem.

“This isn’t about the president being against anyone. This is about the president and millions of Americans standing for something,” White House Press Secretary Sarah Sanders said Monday. “Honoring the flag, the national anthem, and the men and women who fought to defend it.”

She added: “It is always appropriate for the president of this country to promote our flag, to promote our national anthem and ask people to respect it.”