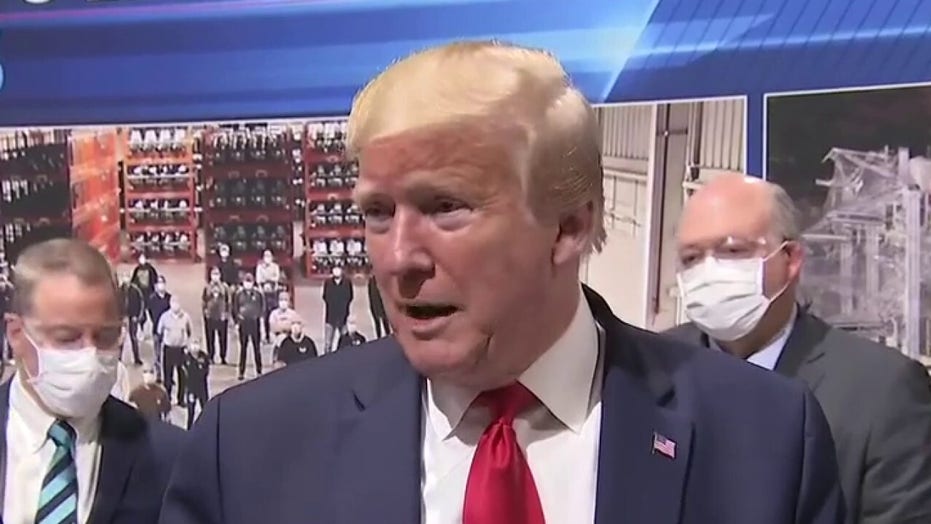 Trump visits Ford plant in the swing state of Michigan; reaction and analysis on 'The Five.'

President Trump blasted the attorney general of Michigan late Thursday after she said she was going to have a “very serious conversation” with Ford Motor Co. for allowing the president to go without a mask during part of a tour of the company's Rawsonville Components Plant in Ypsilanti.

“The Wacky Do Nothing Attorney General of Michigan, Dana Nessel, is viciously threatening Ford Motor Company for the fact that I inspected a Ventilator plant without a mask,” Trump tweeted after his tour. “Not their fault, & I did put on a mask. No wonder many auto companies left Michigan, until I came along!”

Trump did wear a mask for part of the tour of the plant that has been repurposed to make medical supplies, but refused to put it on in front of reporters -- although at least one photographer snapped a photo that was posted on social media. It showed the president wearing a mask that included the presidential seal.

President Trump holds his protective face mask as he speaks while touring Ford's Rawsonville Components Plant that has been converted to making personal protection and medical equipment, Thursday, May 21, 2020, in Ypsilanti, Mich. (Associated Press)

"I had one on before,” Trump told reporters during the visit. “I wore one on in this back area. I didn't want to give the press the pleasure of seeing it. In the back area I did have a mask on. I had goggles and a mask right back there.”

TRUMP BRINGS MASK TO FORD, SAYS HE DOESN'T 'WANT TO GIVE THE PRESS THE PLEASURE OF SEEING' HIM WEARING IT

He added it wasn’t necessary to wear a mask around reporters and Ford representatives in the front of the plant because “Everybody's been tested.”

Nessel told CNN the state would be speaking to Ford about allowing the president to go without a mask for the public portion of the tour in what she said was a violation of Gov. Gretchen Whitmer’s executive order requiring masks in enclosed public spaces.

"They knew exactly what the order was and if they permitted anyone, even the president of the United States, to defy that order, I think it has serious health consequences potentially to their workers,” Nessel told CNN.

She also said she was "ashamed" to have him as the president and she hoped Michigan voters "will remember this when November comes, that he didn't care enough about their safety, he didn't care about their welfare, he didn't respect them enough just to engage in the very simple task, the painless task, the easy task of wearing a mask when he was provided one."

Trump suggested in another tweet that Ford might leave Michigan if it's held accountable for his actions.

“Do nothing A.G. of the Great State of Michigan, Dana Nessel, should not be taking her anger and stupidity out on Ford Motor - they might get upset with you and leave the state, like so many other companies have - until I came along and brought business back to Michigan. JOBS!”  he wrote.

When asked if it was true that it wasn’t required that the president wear a mask, Ford’s CEO, Jim Hackett, told reporters, “It’s up to him.”

In a statement Thursday afternoon, the Ford Motor Company added: “Bill Ford encouraged President Trump to wear a mask when he arrived. He wore a mask during a private viewing of three Ford GTs from over the years. The president later removed the mask for the remainder of the visit.” Bill Ford, the great-grandson of Henry Ford, has been the company’s executive chairman.

"Hi! After struggling with our Gov & SOS, impressed you know my name," she wrote. "Seems like you have a problem with all 3 women who run MI-as well as your ability to tell the truth. The auto industry has been thriving for years bc of our incredible auto workers & companies."

She added that it was hard to say she's done nothing "with all the lawsuits myself and the other @DemocraticAGs have filed and won against you."