Suspicious device addressed to former CIA director Brennan was discovered in the CNN mailroom, while Secret Service intercepted packages addressed to Clinton and Obama. Catherine Herridge has the details for 'Special Report.'

A day after a spate of suspicious packages were sent to top Democrats in the latest escalation of the polarized politics gripping the country, President Trump blasted the "mainstream media" for stoking anger.

While Trump did not reference the suspicious packages, including what law enforcement officials described as "potentially explosive," that were sent to former President Obama, Hillary Clinton, ex-CIA Director John Brennan, former Attorney General Eric Holder and Rep. Maxine Waters, they may have been on his mind when he sent the Thursday morning tweet.

"A very big part of the Anger we see today in our society is caused by the purposely false and inaccurate reporting of the Mainstream Media that I refer to as Fake News," President Trump tweeted early Thursday. "It has gotten so bad and hateful that it is beyond description. Mainstream Media must clean up its act, FAST!"

Trump has sparred with the media since entering the 2016 presidential race, blaming major outlets for what he considers unfair coverage of him. Media outlets have likewise blamed Trump for heated rhetoric some say contributes to a toxic climate. 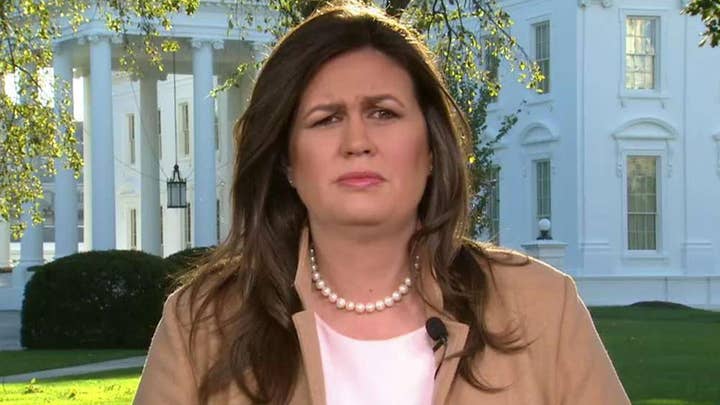 On Wednesday, several packages containing suspected explosive devices were intercepted en route to some of the most prominent Democratic political figures in the country. CNN's New York office was evacuated due to the discovery of an apparent explosive device addressed to Brennan. Law enforcement officers said the incidents appeared to be related, noting that the devices appeared to be pipe bombs.

A day earlier, a bomb was found in the mailbox of liberal financier George Soros and on Thursday, police said a suspicious package was sent to actor Robert De  Niro, a harsh Trump critic.

Trump said Wednesday afternoon that the devices are being inspected, "and a major federal investigation is now underway."

"We have to unify. We have to come together," Trump said, at a bill-signing for opioid legislation. "Acts or threats of political violence of any kind have no place in the United States of America."

Republican Congressman Steve Scalise was shot on a baseball field in 2017, as he practiced for a House game against Democrats, and since then incidents of vandalism at political party offices and leaders, most prominently Republicans, being hounded in public have become commonplace.

"Time and time again, the President has condoned physical violence and divided Americans with his words and his actions," said Schumer and Pelosi. "[E]xpressing support for the Congressman [Greg Gianforte] who body-slammed a reporter, the neo-Nazis who killed a young woman in Charlottesville, his supporters at rallies who get violent with protestors, dictators around the world who murder their own citizens, and referring to the free press as the enemy of the people."