Kayleigh McEnany: Trump wants a substantive back and forth debate with Biden

The commander-in-chief has been doing debate prep with his lawyer and former New York City Mayor Rudy Giuliani and former New Jersey Gov. Chris Christie, but McEnany said the president has been daily preparing to take on his Democratic challenger by answering "grueling questions" from reporters in contrast to Biden.

"He is the most transparent president in history, and he's had more preparation than anyone just on the day-to-day basis of doing his briefings, his gaggles, and other forms of questioning," she explained.

Previewing Trump's matchup with the former vice president in Cleveland, Ohio Tuesday night in the debate moderated by Fox News' Chris Wallace, McEnany said there will be a lot of differentiating between their records.

"We’ve had eight years of Obama-Biden, and when you look back, there's a very definitive contrast between healthcare premiums going up, drug prices going up, choice going down," she said.

"President Trump came in, reversed all of that, bringing premiums down, drug prices down for the first time in 50 years, more choice to the market. You had the slowest economic recovery since World War II under Obama-Biden followed by historic lows in unemployment, a V-shaped recovery. On each and every issue there is a point-by-point contrast and a clear definitive choice the American people have to make, and I think they’ll recognize the president’s accomplishments this evening."

Host Sandra Smith asked the White House spokesperson what to expect from the president on his intentions against Biden.

"The president wants a substantive back and forth because he has the truth and the facts on his side," she said. 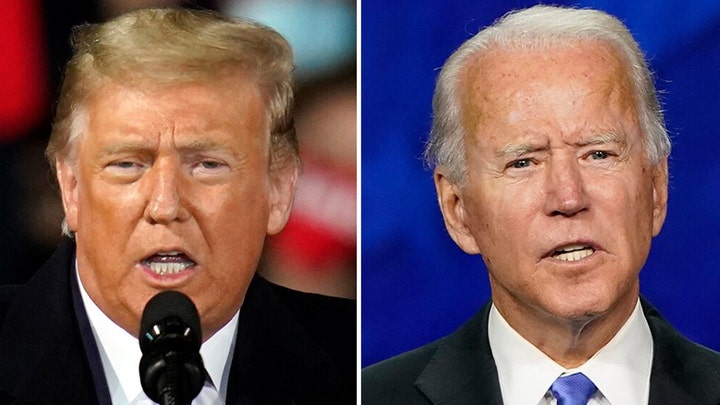 "I’m sure the former vice president doesn’t want to be talking about his record with the V.A., which was in shambles that the president reversed, giving good healthcare to our veterans. I’m sure he doesn’t want to talk about the dwindling down of the military with sequestration, and President Trump, a historic investment in our military. I'm sure he doesn't want to talk about the chaos on the world stage followed by President Trump bringing two Middle East peace deals, the only president to have that accomplishment."

She added, "Facts are on our side. The president wants jousting back and forth with substantive contrast."

Although Trump is prepared on all topics, McEnany said Trump is especially focused on the economy: "A V-shaped recovery, what we're seeing, exceeding CBO expectations and jobs reports, only a businessman like President Trump could make that possible."

McEnany said it's fair to ask about Biden's cognitive abilities, pointing out that Trump is up early and working "around the clock" calling world leaders and working long days.

She slammed the New York Times' Sunday report about Trump's taxes as another "smear" similar to what the newspaper did in 2016.

"The president has paid tens of millions of dollars in taxes in the decade leading up to him declaring his candidacy, and millions after. He is the only president to have donated his salary, $1.4 million to the American people, back to the American treasury. He works for free. His money goes to the U.S. Treasury," she explained. "The real questions are really though for Hunter Biden, we've seen that Senate report, who got $3.5 million from the Moscow mayor’s wife. President Trump pays the U.S. Treasury. Russia pays Hunter Biden."